The war between Russia and Ukraine began long before 24 February 2022, the date provided by the Ukrainian Government, NATO and the United States for the beginning of the Russian invasion.

According to Dmitry Kovalevich, a journalist and a member of a now-banned communist organisation in Ukraine, the war actually started in the spring of 2014 and has never stopped since.

He writes to me from the south of Kyiv and recounts an anecdote: “What’s there at the front line?” asks one person. “Our troops are winning as usual!” comes the response. “Who are our troops?” the first person inquires and is told, “We’ll soon see.” In a war, everything is in dispute, even the name of Ukraine’s capital (Kyiv in Ukrainian, and Kiev in Russian, goes the debate online).

Wars are among the most difficult of reporting assignments for a journalist. These days, especially, with the torrent of social media and the belligerence of network news television channels, matters on the ground are hard to sort out. Basic facts about the events taking place during a war are hard to establish, let alone ensuring the correct interpretation of these facts.

Videos of apparent war atrocities that can be found on social media platforms like YouTube are impossible to verify. Often, it becomes clear that much of the content relating to war that can be found on these platforms has either been misidentified or is from other conflicts. Even the BBC, which has taken a very strong pro-Ukrainian and NATO position on this conflict, had to run a story about how so many of the viral claims about Russian atrocities are false. 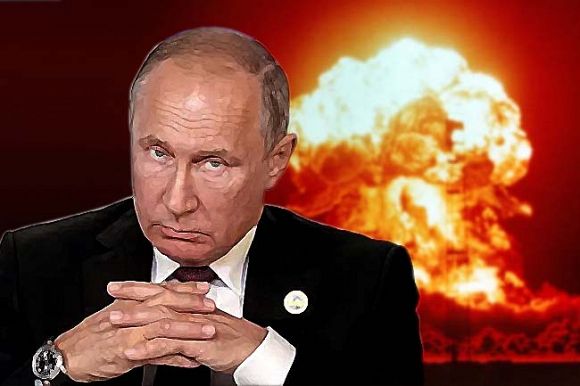 Among these false claims, which have garnered widespread circulation, is a video circulating on TikTok that wrongly alleges to be that of a Ukrainian girl confronting a Russian soldier, but is instead a video of the then-11-year-old Palestinian Ahed Tamimi confronting an Israeli soldier in 2012. The video continues to circulate on TikTok with the caption, ‘Little girls stand up to Russian soldiers’.

Meanwhile, disputing the date for the beginning of the Russian-Ukrainian war as 24 February, Kovalevich tells me:

“The war in Ukraine didn’t start in February 2022. It began in the spring of 2014 in the Donbas and has not stopped for these eight years.”

Kovalevich is a member of Borotba (Struggle), a communist organisation in Ukraine. Borotba, like other communist and Marxist organisations, was banned by the previous U.S.-backed Ukrainian Government of Petro Poroshenko in 2015 (as part of this ongoing crackdown, two communist youth leaders – Aleksandr Kononovich and Mikhail Kononovich – were arrested by Ukrainian security services on 6 March).

“Most of our comrades had to migrate to Donetsk and Luhansk,” Kovalevich tells me. These are the two eastern provinces of mainly Russian speakers that broke away from “Ukrainian Government control in 2014” and had been under the control of Russian-backed groups. 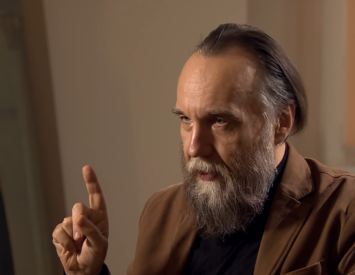 The name Alexander Dugin is not known to most outside Russia, but millions are now openly dealing with the consequences of this man’s strange ideas.

In February, however, before the Russian invasion of Ukraine, Russian President Vladimir Putin recognised these ‘two breakaway regions in eastern Ukraine as independent,’ making this contentious move the stepping stone for the final military invasion by Russia. Now, Kovalevich says, his comrades “expect to come back from exile and work legally”.

This expectation is based on the assumption that the Ukrainian Government will be forced to get rid of the existing system, which includes Western-trained-and-funded anti-Russian right-wing vigilante and paramilitary agents in the country and will have to reverse many of the Poroshenko-era illiberal and anti-minority (including anti-Russian) laws.

“I feel quite nervous,” Kovalevich tells me. “[This war] looks very grim and not so much because of the Russians but because of our [Ukrainian] armed gangs that are looting and robbing [the country].” When the Russians intervened, Ukrainian President Volodymyr Zelenskyy handed out weapons to any citizen who wanted to defend the country.

Kovalevich, who lives in central Ukraine just south of the capital, says:

“My area was not affected by military actions — only by the terror of [right-wing] nationalist gangs.”

During the first days of the Russian military intervention, Kovalevich took in a Roma family who had fled from the war zone. “My family had a spare room,” Kovalevich tells me. Roma organisations say that there are about 400,000 Roma in Ukraine, most of them living in the western part of Ukraine, in Zakarpatska Oblast (bordering Hungary, Poland, Romania and Slovakia). 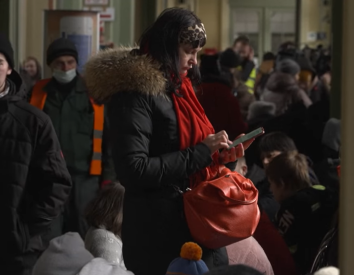 We have all watched in horror as Russian troops have advanced on Ukraine.

“The Roma people in our country are regularly assaulted by [right-wing] nationalists. The nationalists used to attack them [Roma] publicly, burning their encampments, calling it ‘cleansing garbage’. The police didn’t react as our far-right gangs always work in cooperation with either the police or with the security service.”

This Roma family, who was being sheltered by Kovalevich and his family, is on the move toward western Ukraine, where most of the Ukrainian-Roma population lives. “But it is very unsafe to move,” Kovalevich tells me. “There are nationalists [manning these] checkpoints [along] all roads [in Ukraine, and they] may shoot [anyone] who may seem suspicious to them or just rob refugees.”

The war in the Donbas region that began in 2014 resulted in two agreements being signed in Belarus in 2014 and 2015, which were named after the capital of Belarus and were called the Minsk agreements. These agreements were aimed at “[ending] the separatist war by Russian speakers in eastern Ukraine”.

The second of these agreements was signed by two leading political figures from Ukraine (Leonid Kuchma, the President of Ukraine from 1994 to 2005) and from Russia (Mikhail Zurabov, the ambassador of the Russian Federation to Ukraine, 2009-2016), respectively. It was overseen by a Swiss diplomat (Leonid Kuchma, who chaired the Independent International Fact-Finding Mission on the Conflict in Georgia, 2008-2009).

This Minsk II agreement was endorsed by the UN Security Council resolution 2022 on 17 February 2015. If the Minsk agreements had been adhered to, Russia and Ukraine would have secured an arrangement that would have been acceptable in the Donbas. 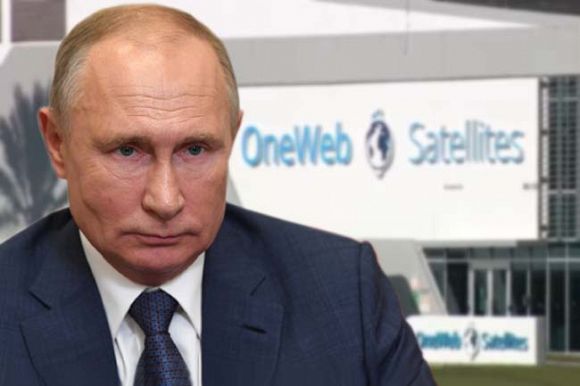 Telstra might regret having signed a deal with OneWeb as this company has now become a pawn in the war between Russia and Ukraine.

“Two Ukrainian governments signed the Minsk agreements but didn’t fulfil [them]. Recently Zelenskyy’s officials openly mocked the agreement, saying they wouldn’t fulfil it (encouraged by the U.S. and the UK, of course). That was a sheer violation of all rules — you can’t sign [the agreements] and then refuse to fulfil [them].”

The language of the Minsk agreements was, as Kovalevich says, “liberal enough for the Government”. The two republics of Donetsk and Luhansk would have remained a part of Ukraine and they would have been afforded some cultural autonomy (this was in the footnote to Article 11 of the 12 February 2015, Minsk II Agreement).

“This was unacceptable to our nationalists and [right-wing nationalists]. [They] would like to organise purges and vengeance there [in Donetsk and Luhansk].”

Before the Russian military intervention, the UN High Commissioner for Human Rights found that more than 14,000 people had been killed in the ongoing conflict in Donetsk and Luhansk despite the Minsk agreements. It is this violence that provokes Kovalevich to make his comments about the violence of the ultra-nationalists and the right-wing paramilitary.

“The elected authorities are a cover, masking the real rulers of Ukraine,” Kovalevich says. Ukraine’s President Zelenskyy and his allies in the parliament do not drive the governing process in their country but have “an agenda imposed on them by the far-right armed groups”. 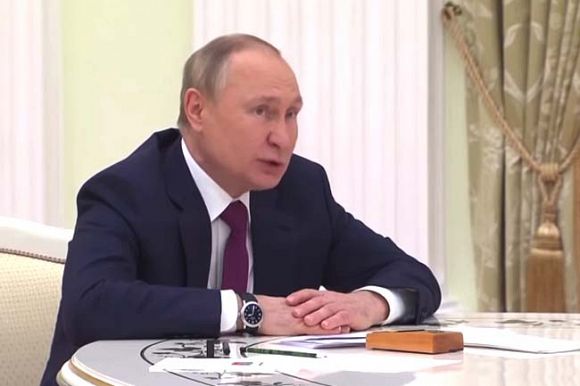 Two weeks into the invasion of Ukraine, Putin might still get his quick conquest — but a lasting great victory remains more elusive.

Negotiations are ongoing on the Ukraine-Belarus border between the Russians and the Ukrainians. Kovalevich is, however, not optimistic about a positive outcome from these negotiations. Decisions, he says, are not made by the Ukrainian President alone, but by the right-wing ultra-nationalist paramilitary armed groups and the NATO countries.

As Kovalevich and I were speaking, the Washington Post published a report about plans for a U.S.-backed insurgency in Ukraine; former U.S. Secretary of State Hillary Clinton implied an Afghanistan-style guerrilla war in Ukraine, saying: “We have to keep tightening the screws.”

“This reveals that they [the U.S.] don’t really care about Ukrainians. They want to use this as an opportunity to cause some pain to the Russians.”

These comments by Clinton and others suggest to Kovalevich that the United States wants “to organise chaos between Russia and the Europeans”. Peace in Ukraine, he says, “is a matter of reconciliation between NATO and the new global powers, Russia and China”. Till such a reconciliation is possible and till Europe develops a rational foreign policy, “we will be affected by wars,” says Kovalevich.

This article was produced by Globetrotter.

Vijay Prashad is an Indian historian, editor and journalist. He is a writing fellow and chief correspondent at Globetrotter. He is the chief editor of LeftWord Books and the director of Tricontinental: Institute for Social Research.