#TURC on the HSU Day 1: Home is where the Hart is

The Union Royal Commission moved onto the HSU yesterday, with Katrina Hart seemingly perjuring herself in her written submission. Peter Wicks reports.

DESPITE THE ANTICIPATION, yesterday was a relatively quiet day at the Royal Commission Into Trade Union Governance And Corruption — though there was one event of significant interest, which I will get to shortly.

Witnesses that appeared yesterday were Mark Hardacre, Marco Bolano and Katrina Hart and there were sour grapes to discuss.

In the media room, all the talk was about the Million Dollar Woman, Kathy Jackson, and the questions around her spending that everybody wants to hear explained.

Counsel assisting the Commission, Jeremy Stoljar SC, made mention of this in his opening statement saying

“In recent weeks a number of allegations have surfaced in relation to Ms Jackson.”

Actually it has been more than two years now, I gave up counting the weeks about 18 months ago, but never mind, at least it’s getting some interest at last.

Those waiting to hear Jackson's explanations were left high and dry, although she is set down to appear later in the week.

What we did hear were the complaints of those who had lost previous union elections about those that defeated them.

Mark Hardacre was the first and it is fair to say he was there to settle some scores with Michael Williamson.

Hardacre is a former organiser for the HSU NSW Branch and an elected assistant state secretary when the NSW Branch was called the HREA.

He complained that he was harassed during election campaign, and once as an elected official left out of meetings, kept out of the loop and “locked out” of going to a Labor Party conference any Labor Party member would have been free to attend.

I have no doubt at all that much of what Mr Hardacre says is true. Any group of elected people have differences of opinion and, where there is a large group from one faction, they will usually make it hard for the minority group. It is the same in local councils and at all levels of politics.

However, Williamson now resides in a jail cell, so if that is not enough for Hardacre, I don’t know what else can be done.

Next up came Marco Bolano who managed to battle his way to the witness stand unaccompanied, despite allegedly claiming to be completely incapacitated and receiving, to this day, massive workers compensation payments as a result.

One thing was borne out by Bolano’s testimony — he apparently doesn’t know much.

Asked why Phillip Morris donated to his election campaign, he didn’t know.

Asked why others ‒ such as Labor MP David Feeney, Feeneys wife Liberty Sanger, the AWU, the Shop Distributive and Allied Employees Association (SDA) and many more ‒ donated to his campaign, he didn’t know.

According to Bolano’s testimony, however, Kathy Jackson might — after all, she organised all of these donations he claims. In fact, there wasn’t a bus that Bolano didn’t want to throw Jackson or Feeney under, seemingly.

Apparently, according to Bolano, the factional battles are all about votes at Labor conferences.

Despite Labor MP David Feeney and Feeney’s wife Liberty Sanger making huge donations to his campaign, he was never aware of it being for any political reason, as he said he was never asked to use the Union’s proxy votes at Labor conferences in any particular way.

Even staff members at Bolano’s Union branch donated into a campaign fund Bolano testified, some as much as $1,000 — very generous for someone on a lowly health worker’s wage, one may have thought.

Bolano seems to have lots of theories about ulterior motives of others to explain their support and actions but no idea whatsoever as to why anybody would support him.

He said he had been referred to as a Kathy Jackson puppet and joked about people saying he had a string coming out of his back that Jackson pulled when she wanted him to talk. He didn’t know why people would say these things. I guess just like the bulk of his testimony, we will have to ask Kathy…

The last witness for the day was Katrina Hart.

Hart is a Clinical Support Officer and president of the Randwick campus General Sub Branch of the Health Services Union New South Wales. (Try spitting that out after a few drinks…)

Despite claiming a huge tidal wave of support from the HSU membership, Hart has twice failed to be elected at HSU elections.

Hart was there to praise her factional allies Jackson and Bolano and make repeated claims endorsing their self-proclaimed whistle-blower status.

Hart also stated how shocked she and the membership were that a Union secretary would be paid a $300,000 salary — as Williamson was.

However, Fiona had not issue, apparently, with Jacksons $270,000 salary for being secretary of a smaller HSU branch.

Hart’s testimony was all about backing up Bolano and Jackson, whilst at the same time complaining about the tactics of the team that defeated her at the last two elections by a substantial margin.

In Hart’s witness statement, she even goes so far as to attack me for her own mistakes and potentially perjure herself in the process:

On page 18 of her sworn statement, Hart has a section titled :

Now, first of all, I have no apostrophe in my surname, but I’ll leave that aside as research does not appear to be high on Hart’s list of abilities.

215. Mr Peter Wicks put my home address up on his internet blog page.

217. I believe that Mr Wicks has the private details of HSU staff members from MEMforce which is the HSU database repository of members personal information.

218. Mr Wicks must have obtained this information from someone inside the HSU

222. The only organisation which had my address was the HSU and I did not tell anyone that this had happened

223. I did not communicate with anyone in the HSU about it. 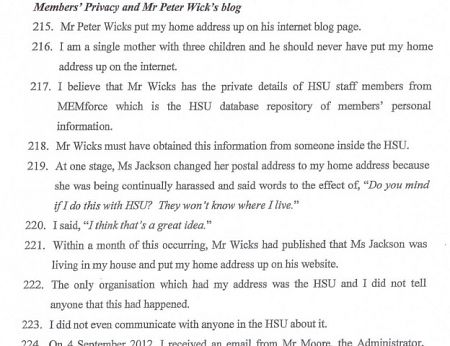 This testimony is highly misleading, defamatory and almost completely false, as Katrina Hart, I am sure, would be fully aware.

For starters, she swears that she didn’t communicate with ‘anybody’ at the HSU about her address — despite stating in the very same section she told Kathy Jackson about it, as Jackson was using her address for postal reasons.

In my appropriately titled article ‘Born To Lose’ from 13th September 2012, I address the publication of Hart’s address, which was on an email she sent to members, which I subsequently posted on my site:

And the funny thing about that address is, she did not want that address made public, and complained to the administrator after I mentioned the suburb, Chifley in another of my articles. I’m not going to make any judgements on Katrina’s IQ level or anything, however if she wanted the address kept secret, it’s probably not real wise to put it at the bottom of an email you send out to thousands of members that you hope are easily led.

I have deleted the address from my copy, you know, cos I’m a nice guy and all.

If Hart was aware that her address went up on my website, she would have also been aware that it was only there due to her including it on an email she had sent to thousands of union members, making her sworn statement false. 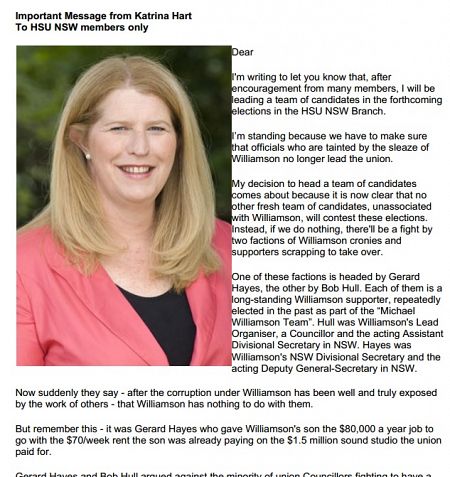 Far from not communicating with anyone about her address, she actually sent it to thousands.

For the record, I do not have a database of HSUunion members nor has anybody from the Union offered to give me one.

It should also be noted that I have never been asked to remove the address from Harts document by anyone at all ‒ including Hart ‒ however once it was pointed out to me that it was her private address not a campaign office, I immediately removed it myself.

Hart seems to be continuing what Jackson and some in the media have tried — if they can’t explain the evidence I have raised, then they will attempt to smear the messenger.

They will need a better tactic then that.

All of the witness statements can be viewed in full on my HSU/Jacksonville Resource Page.

The Royal Commission inquiries into the HSU (#TURC on Twitter) continue today.

Peter Wicks will be live tweeting from #TURC today @madwixxy. Listen to Peter Wicks on 2SER speak about Jacksonville and the Royal Commission here.