WHEN I WAS 10, my father was commanding a paratroop regiment in Ireland.

It was the height of 'The Troubles' — 1976, the year of the great British drought and the last years of my childhood before the spartan rigours of boarding school.

My father was on the IRA hitlist and every time we were going to use the car, I had to check under it for incendiary devices. I'm quite sure that I didn't really know what I was looking for, but I clearly remember peering under the car looking for anything different or strange. It was my job. Not your average childhood chore!

Every night, my Mother and I would watch the 6 o'clock news, holding our breath, to see if there had been any violence in Ireland. If there had been an incident, we would wait, barely breathing, rigid with fear, to see if my father would phone. If we still had a family. When the telephone finally rang, we would stop breathing again until Mummy heard my father's voice —  then we could breathe. I would go to bed. All was well. For another day.

For most people in England, 'The Troubles' were remote until the 1972 Aldershot Army barracks bombing, which killed 7 people and the 1974 Guildford pub and Houses of Parliament bombings. In 1975 the IRA bombed the Hilton Hotel, killing two and injuring 63 people. Then terror was closer to home.

But with classic 'stiff upper lip', the British refused to let fear compromise or change their lives.  The blitz mentality was resuscitated for another generation. And continued until 2001.

But the bombings were sporadic in the UK and no-one could predict or plan for them. So life had to continue as normal.

For our family, terror was closer to home, as it is for all families with a member who serves in the Defence forces. It was daily, it was real and its effects have been lifelong.

Forgive me if I see Tony Abbott's trumped up fear and warmongering for what it is — the last ditch attempts of an unpopular prime minister to gain some support in a country that is sick of his political posturing. It's the George Dubya Bush school of crisis management — concoct a war, ramp up the terror and let fear and loathing for the unseen enemy unite the country behind he who so bravely leads the charge.

Of course, the Boston bombing has shown us that we must ever be vigilant, but we cannot prepare for or anticipate from whence attack may come.

The answer to that is not more data retention or heightened security or flushing out the 'reds under the beds' [insert race appropriate to this week's or year's perceived threat] but improved self-esteem and services for young people. A healthier society. A more connected society who know their neighbours and have the skills to spot trouble before it arises.

We are so isolated in our own skins and mini worlds, so lost in cyberspace with so called social media, that we have forgotten how to be present in the real world. How to connect with people face-to-face, read the signs on their faces, in their body language, in their silences.

And because we are so isolated in our own homes, cars, and offices, it is easy to convince the vast majority that there is a terrible terror threat 'out there'. That we are under attack.

That "they hate us" and want to bring us down.

That we are important enough to warrant terrorist thought and planning.

But it's not real. It's a confected political spinfest. Those of us who know real fear can tell the difference.

I marched in the UK's biggest ever peacetime demonstration in February 2003. Over a million people who could see that Bush and Blair's considered oratory and fear mongering was a web of lies, masking simpler and more sinister political and private industry needs.

The majority thought we were nuts when we said there were no weapons of mass destruction.  We were proved right eventually.

Now, those same people are falling for the LNP spin and rhetoric. Have they learned nothing?

Wake up, my friends, this is just the last ditch efforts of a floundering government to win friends and influence people. Don't be a patsy to their political bravado. Watch what the other hand is doing.

I am not negating the political power of ISIS or their tool of terror. I've seen it all before with the IRA.

ISIS are a long way from here. Quite frankly we have more to fear crossing the road or driving our cars. The current Government seems to want to close our open and generous hearts with all the rhetoric about the threat to our shores, the terror threat, the budget emergency... fear and loathing in Australia.

The Australia I chose 27 years ago was one of hope, open hearts, open minds and welcoming arms.

#TeamStraya Rule #1: Always mention the war. pic.twitter.com/tyIB24AWoo #Lateline (I didn't mention it once, but I think I got away with it.) 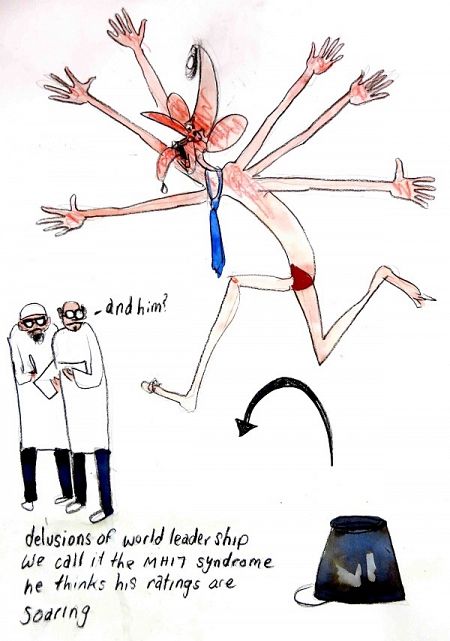 6 September 2020, 4:30pm The significance of the upcoming U.S. Election spans beyond the borders of America ...

The sad demise of another former Aussie icon — Stayz