Think for Yourself: Wish shopping app

Have you ever seen those links to an absurdly cheap deal on social media and wondered how it could be possible to sell a pair of shoes for $2? Frequent IA contributor John Turnbull orders a random sample of ultra-cheap crap for the good of science*.

Do you want to buy a t-shirt for $2 or a tent for a tenner? There are a number of different companies spruiking incredibly cheap deals across social media and one of the most active is Wish. Clicking on one of their banner ads takes you to an app download, at which point you give them your email address and access to an indeterminate amount of your data — depending on whether or not Facebook has been breached this week.

Wish was founded by former Facebook software engineer Peter Szulczewski in 2010 with the business model of connecting shoppers directly to manufacturers around the world (but mainly in China). By dealing directly with manufacturers, prices can be drastically reduced but there seems to be little quality control and shipping times vary significantly.

With a pre-market valuation of US$8.5 billion (AU$11.09 billion) in September last year, it’s clear that there’s money in ultra-cheap goods — but is it sustainable?

An external hard drive for $3? Impossible!

After downloading the app, I was confronted with a selection of categories of interest. I chose clothes, technology and toys. Determined not to get carried away (as I tend to do while shopping online, or so I have been told) I set myself a price limit and let my fingers do the walking.

Hey @WishShopping, you're currently selling a bootleg of a shirt I illustrated for @80stees, an official Hasbro licensee. Ya wanna maybe, NOT do that? pic.twitter.com/qslbU2OJPS

The first thing I bought was a couple of watches – because I tend to break my watch a lot – and I am also one of those old-school types who still wears a watch, even though I have the time available on my phone. Next, I bought what was described as a "Quality Cotton Hoodie" with what looked like the word "SWAT" printed under the front zipper. I ordered an extra large size and reasoned that if I didn’t like it I could always give it to my son.

How could I resist when I saw a "High Quality Awesome" cap with the Superman logo on it for only $6? I didn't deliberate before buying a one terabyte external hard drive for $2.85 and then grabbed an "Essential" aluminium pen that can break a car window... if I ever happen to get stuck in a lake or something.

It is somewhat concerning that in addition to clothes and other random crap, you can buy various types of weapons on Wish, from the aforementioned window-smashy pen, to slingshots, extendable batons, brass knuckles and tomahawks. I chose the smallest possible camping knife and discovered that it was free — I just had to pay postage. If it gets confiscated by an overzealous Border Force agent, then so be it.

@WishShopping has an actual gun for sale. what the hell, sort it out!!! pic.twitter.com/vGWAWgm3Ww

And then I played the waiting game...

So long, I forgot some of my purchases and was genuinely surprised when they turned up in the mail. Which is either nice or slightly concerning, depending on your perspective.

The watches arrived first. They were cheaply made and only superficially resembled the ones in the banner ad, the batteries lasting only a few weeks before failing. As replacing the batteries would have cost more than buying a new watch, I abandoned those as futile.

The hoodie arrived next and at the very least it gave me a laugh. "Quality Cotton" must be the name of the style, as this thing seems to be a cheaper version of polyester. I would be terrified wearing this hoodie near a naked flame, which is a good thing because it is itchy and looks ridiculous. The hood is far too small to cover my head and the extra large size barely fits me, despite my decidedly non-extra large frame. Oh, and that word printed under the zipper? It’s "SWAG", just like Justin Bieber says. F’n fantastic… 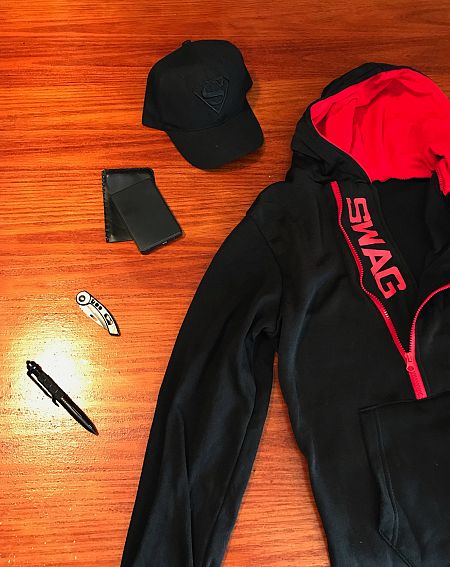 The same went for the "High Quality Awesome" cap, which did have a Superman logo as ordered but could not be fairly called high quality (awesomeness may vary by individual). The free camping knife (+$5 postage) arrived without incident but is hard to open and probably wouldn’t survive an actual camping trip.

And how about that hard drive for less than $3? Well, I wasn’t filled with hope when I received the box and it felt empty, but upon opening, I did indeed find a black box and weird USB cord. No instructions to be seen, mind you, and the drive itself was incredibly light at 47 grams — a full 110 grams lighter than a 1TB HD that I bought from JB Hi-Fi for about $75.

Thinking something about security, I plugged the drive into an old laptop with no connection to the network, then turned everything on. Apart from a red light coming on, nothing happened. After following the standard IT practice of turning everything off and on a few times, I decided it was time to take things to the next level.

I used the camping knife to open the hard drive casing. Inside, I found this… 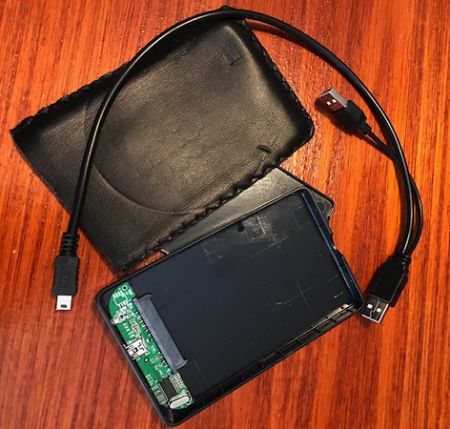 Now I don’t know much about computers, but that looks empty to me. Pretty much what you’d expect for $2.85, I suppose.

What do the critics have to say?

If you read online reviews of Wish you’ll find a lot of people complaining but, then again, that’s the internet for you. There are a lot of one-star reviews balanced out by the occasional suspicious five-star love-fest, but the overall sentiment seems to be negative.

There is also a lot of talk about a class action against Wish in the message boards, based on the ludicrously high "original prices" that they claim on the site. If you want to get involved, you may be awarded as much as $20, which hardly seems worth the effort.

The majority of complaints seem to be about delivery time and goods not matching expectations — pretty much my experience.

So is Wish a scam?

Not at all. But it’s a great educational tool for those yet to learn that you get what you pay for. They have a returns policy that conforms to the Australian Consumer Law, but for the low amount spent per item, most people probably won’t be bothered.

There is no doubt that there are bargains to be found on Wish, the online equivalent of that bloke who can get you anything you need as long as you’re not too fussy. Don’t expect premium quality, keep your expectations low and you might be surprised. Occasionally.

For all of my disappointing Wish purchases, the "Essential Aluminium" pen writes nicely and is sitting in my car awaiting that inevitable day that I drive into a lake…

Think for Yourself: Should Lottoland be banned? https://t.co/80TpZeEeDO @IndependentAus