The Gough Whitlam memorial: Farewell to a giant

For a time it seemed Rudd must sit beside Gillard, but it was soon sorted, and they sat, eyes averted, two apart. Keating, entering, with Annita, got huge applause; Hawke with Blanche, less so, Penny Wong and her ‘spouse’ a great deal, Garrett a little more.

Silence greeted Howard and Jannette. Abbott, unaccompanied, materialised in the front row, from, it seemed, a secret entrance, having been booed out on the street.

Latham was not there, of course; of course. Like Hemingway, he never forgave a favour.

Huge pipe organ music as the tall family entered; a ‘flotilla of Whitlams’, I used to call them, fewer now.

From the upper level, near the front, I could see all the faces, like a perfect stained glass window of a gathering of sainted worthies, in a sacred site, the Town Hall, where, six months ago, Nifty’s coffin had lain, and his daughter, now on a charge of murder, had spoken over him, quoting Shakespeare.

There was the national anthem and Kerry O’Brien came forward, tawny and mild-mannered, Steve McQueen-like, as always, and I remembered how, on the day of the sacking, he, beside me in the press gallery, had said:

“Let slip the dogs of war.”

He told of working on Gough’s last campaign — the energy, the detail, the generosity, the fury, the joy.

And then there was a welcome to country, and a potent didgeridoo, and then ... Freudenberg.

The years melted away and I remembered Freudy in 1977 after Gough resigned, saying:

I remembered ten years ago, after a lunch with Jeff Shaw, Gough saying: “Lend me a shoulder, comrade” and, leaning on Freudy, walked from the building, linked forever to his collaborator and chronicler.

#auspol "You would go to the barricades with such a man": Graham Freudenberg at Whitlam memorial: http://t.co/P7mz8lCZx1 via @YouTube

Freudy’s speech ‒ and his delivery of it ‒ showed the great orator the Legislative Assembly lost when the Labor Party, in its wisdom, nominated Eddie Obeid instead. Like his speech on getting life lembership, in the same Town Hall, it was among the best ten of our nation. But there was more, and better, to come.

Across the world, with perfect symmetry, America’s Whitlam, Obama, was being ended by ebola and Fox News, the toy of Murdoch, who had ended Gough also, and the choir and the orchestra performed the St Matthew Passion final chorus by J.F. Bach.

Cate Blanchett came forward and spoke of how she, as a woman, was better able to explore what she could do in the world because of Whitlam’s free universities and Abbott, the minister for women, cringed in the front row. The choir sang the chorus of the Chorus of the Hebrew Slaves by Verdi and things notched up a bit.

Fifteen years ago, I called Noel Pearson ‘Australia’s best orator’, after sharing a stage with him in Mosman.

He proved it again before a vaster audience in Town Hall with an oration rich in wile and fury, almost Elizabethan in its intimacy, clarity and beauty, in which, being now himself a man of no party, he extolled the ‘old man’ he, his people, and Australia, owed so much.

Quickly hailed as the ‘best Australian speech, ever’, it became, like Lincoln’s second inaugural, a new benchmark of the language well used in a great cause on a high occasion.

Kelly and Carmody then sang From Little Things Big Things Grow in an atmosphere charged like none since wartime.

Faulkner’s tribute and Tony Whitlam’s thanks then swiftly followed and the first chords of Jerusalem, as always, had me in tears.

I remembered Gough at Margaret’s funeral theatrically steering his wheelchair out of the church as the choir sang ‘I shall not cease from mental fight, Nor shall my sword sleep in my hand’ and knowing, I think, precisely knowing, that this was the last that most of us would see of him, heroically engulfed in this great Labour anthem, tragically leaving, making his exit, the job unfinished. And here was the song again.

It was swiftly sung, and that was it. No coffin was carried out. There was silence.

The orchestra conductor stood undecided. Would there be more? No. An inconclusive, shuffling silence.

And that was it.

It was an occasion memorable for its reticence, proud good taste and almost Anglican harmony of soul. No humorous montage of wacky television moments was projected. Gough’s own voice did not occur, though the imitations of others, on stage and at the party afterwards, were many and usually good — Mike Carlton’s, as always, the best.

There was a feeling not so much of sadness, or even happiness at a great life well concluded, as of an enormous, high-vaulting life interrupted, diverted, dislocated and of thirty-eight years then somewhat, although not altogether, diminished in a sort of grand nightclub act, of a stand-up elder statesman for a nation’s posterity.

David Marr on the Whitlam bash. As ever, he distils beautifully, elegantly. http://t.co/J5EDBpHE5P via @guardian

Language honours and forgives / Everyone by whom it lives, as Auden said of Yeats. Lincoln, Churchill, the Kennedys, Obama, had varying successes and great failures in war and peace, but their gift of language, of the smooth self-mocking utterance, of bringing the house down with gales laughter, made up for their failings while millions died.

Whitlam’s record was better than theirs. He embarked on no new war. He ended one. He uplifted three generals to a possibility of personal excellence like none before him, or after. He fought the good fight, he finished, or almost finished, the course. He kept the faith. Now there is laid up for him a crown of righteousness. 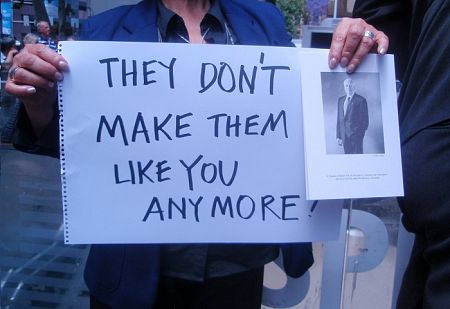 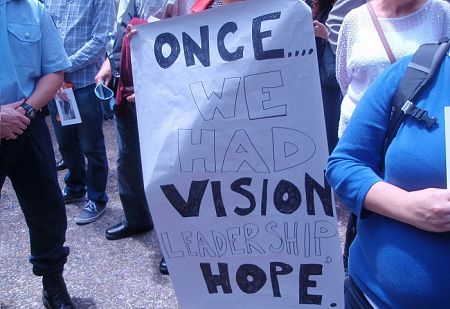 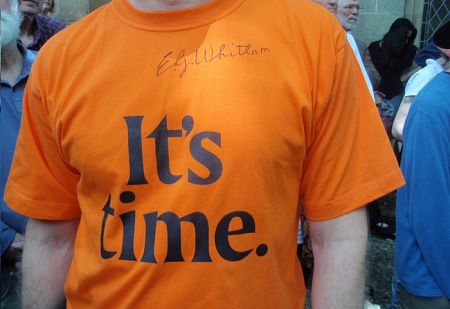 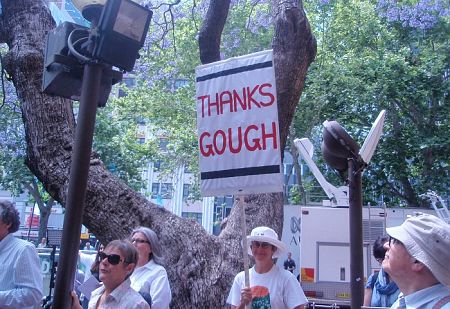