SUBSCRIBE   DONATE LOGIN SHOP
SUBSCRIBE   DONATE
How we prevented a Morrison dictatorship
How Howard screwed the Libs
U.S. site tries to ruin what makes fairy bread great
Bloody Idiot of the Week — Episode 28: Get used to it
Morrison's 'politics of retribution'
Women

The #MeToo backlash: When the word 'victim' becomes a weapon

Fundamental to the #MeToo backlash is the weaponisation of the word "victim", used to keep women silent in the interests of perpetrators, writes Dr Jennifer Wilson.

THE USE OF THE TERM “victim” as a pejorative is at the core of victim blaming and reveals profound contempt, especially for women who publicly acknowledge events over which they had no control — specifically, sexual harassment and assault.

As part of the backlash against the #MeToo movement, those seeking to deny the validity of millions of women’s complaints of sexual offences resort first to the expression of scorn and contempt and, next, to attempts to discredit the complainants.

The default method of discrediting a victim is to express undisguised contempt for the very state of being a victim. It’s as if being the victim of someone else’s actions is in itself justification for disbelief, scorn and contempt. Victims of sexual crimes and misdemeanours are particularly singled out for this shaming and we should get our heads around the reasons for that.

BBC News - Why women fear a backlash over #MeToo https://t.co/gX7qIx0e6a

You don’t have to be ashamed if your house is burgled, your car stolen, your bank account stripped by internet thieves, or if you are king hit outside the pub on a Saturday night. In all these instances and more, it is permissible for you to be acknowledged a victim and nobody will shame you for your misfortune.

However, if you’ve been sexually harassed and/or assaulted, the term “victim” can become pejorative and people will argue on a variety of platforms that you need to take responsibility for your life and stop whining. You will also be subjected to assessments of the degree of your victimhood in the court of uninformed public opinion. Your arse was pinched? Get over it. You lost a promotion because you refused your boss sex? Get over that as well.

The narrative that women who endure the experience of being a victim are morally inferior losers failing to make good life choices, neglectful of our own welfare and seeking in some way to gain attention, notoriety and gratification, is an unsubtle yet effective method of denigrating women. It frames us as, at worst liars, and at best, guilty of exaggerating both the events and their effects on us. We are cast as unreliable and pitiable narrators of our own experiences. The subtext is, if you’ve been harassed or assaulted, keep quiet about it because speaking out reveals you’ve been victimised — and being victimised, in itself, makes you a loser.

It’s always disturbing when perverted moral values such as these are pursued by women about women, as we’ve seen in Australia in recent days. Founder and editor of the conservative online journal Quillette, Claire Lehmann, added her somewhat solipsistic voice to the international victim-blaming crowd in response to a Fairfax opinion piece written by a young woman who participated in the development of the app Free to Be. Women can record areas on this app in which they’ve felt safe or unsafe as a guide for others, including on public transport, where women experience considerable harassment.

Men don’t grope on Australian trains. This is straight up fantasy. https://t.co/GB2uzGYxVM pic.twitter.com/IQMHLAmC2l

Lehmann went on to dismiss accounts of harassment on public transport as “bullshit”, and claimed that some women seek victimhood for attention and the op-eds. Lehmann offered no evidence for her claims, except to insist that if there was a lot of harassment on Australian trains it would be a national scandal and it isn’t. However, as one woman each week is murdered by her partner and that is not yet anywhere near a national scandal, it’s hardly likely that harassment on trains will make the cut.

318 reported incidences of sexual assault out of how many people using the metro? sheesh.

Lehmann, who describes herself as a "dropout" from her graduate program in psychology”, strongly dislikes what she perceives as victimhood, writing on her blog in articles titled 'Are women really victims?' and 'Doing victimhood':

'A person is only a victim if they feel like one — women included … Today victimhood culture is mushrooming like a poisonous cloud because people seem to think they will be granted status or special treatment for it.'

The above observations demonstrate the degree to which the term “victim” has been weaponised in the current discourse of invalidation and contempt. The disgruntled pop psychologist expresses her resentment at victims who might get special treatment or status because of something they’ve endured — a morally skewed perception expressed at length by rightwing commentators such as Mark Latham, Chris Kenny and Andrew Bolt, among others. It should come as no surprise that Latham endorsed Lehmann’s tweets.

Lehmann’s comments have a lot in common with celebrity life coach Tony Robbins’ controversial comments that women are “seeking significance” in recounting histories of sexual harassment and abuse, as well as “hurting themselves” by speaking out.

To paraphrase Inigo Montoya. 'Apologize: you keep using this word. I do not think it means what you think it means.' #MeToo #timesup. https://t.co/OumigQOEMt

What stands out in Lehmann’s position is an urgent desire to be recognised as not being one of those women who has experienced sexual harassment and/or assault. She is distancing herself from female victims of male predation by denigration of those victims, simply because they are victims and she despises victims. Nobody, she states, has to be a victim — even women. This is a ridiculous statement. When something is done to you against your will, no matter what it is, you are a victim. You have been vulnerable. There is nothing shameful in this state. The fault lies entirely with the perpetrator. Lehmann uses the admission of vulnerability to shame. Isn’t this what bullies do? Pile on someone when they’re vulnerable?

Lehmann went on to assert on Twitter that we’re in the midst of a "moral panic" about sexual harassment and assault, drawing a peculiar analogy between #MeToo responders, witch trials, reds under the beds and satanic rituals at daycare centres.

She defines moral panic as when

' ... an intense reaction occurs to a perceived threat, which is possibly imaginary (such as witches) or if not wholly imaginary than greatly inflated'.

Obviously, a moral panic is in the eye of the beholder, as Lehmann offers no evidence for her claims of inflation and fantasy — indeed no substantiation at all, other than that she herself can’t believe the fears and experiences claimed by women are anything other than “bullshit” and “fantasy.” She is not, she adds, obliged to believe any of the claims. Of course she isn’t. However, her belief or unbelief is of absolutely no relevance, except insofar as she uses those personal beliefs as public justification for the dismissal of the experiences of others. 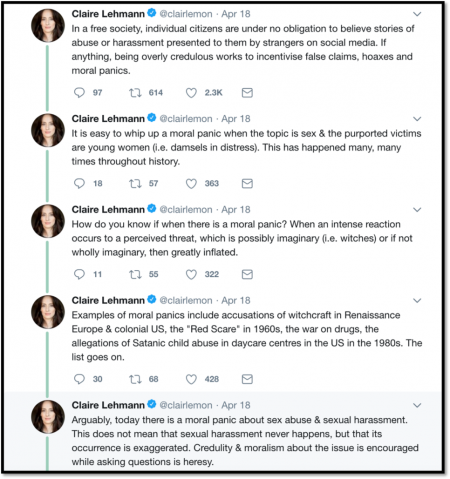 Is this a conservative thing? If I don’t believe it, it isn’t happening?

It’s not difficult to analyse the motives behind the backlash discourse. They aren’t original and they aren’t complex. They are entirely about silencing through shaming. The shame, in this instance, lies in having these experiences in the first place because competent women, women who take responsibility for their lives, their choices and their actions, are never victims and if by some terrible cosmic error they become victims, they don’t speak about it. Successful women hide their shame, do not accuse men, and avoid at all costs the slur of victimhood.

By a mysterious moral alchemy, the victim of a sexual predator is transformed into an abject, sullied individual. Those who escape attack invariably constitute the critical cohort of the morally superior. You rarely find a survivor telling a victim she should have taken more responsibility for her choices and in so doing, avoided the attack.

Quillette is described by its founder as 'a platform for free thought'.

Lehmann claims in her mission statement:

'We respect ideas, even dangerous ones. We also believe that free expression and the free exchange of ideas help human societies flourish and progress. Quillette aims to provide a platform for this exchange.'

"Women Share Stories Of Assault On Public Transport After It Was Called “Fantasy”" https://t.co/5YjhXXCdST #Railway #Sydney

Apparently, the dangerous ideas that women are molested on Australian trains and in public spaces, and that being a victim is a familiar life experience rather than an indicator of inherent moral abjectness, are ideas far too dangerous for Lehmann and Quillette to contemplate. I’m at a loss to see how human societies can flourish if we are engaged in a constant battle with people who deny the existence of anything they can’t or won’t see.

Lehmann isn’t attempting to make a rational, reasoned argument for her moral panic thesis. She isn’t attempting to argue against the experiences of millions of women in any rational, reasoned fashion. Can such experiences be argued against except by those involved, or in a court of law? While, as Lehmann points out, we are not obliged to believe the accounts, we have no basis for declaring them false, either. Your belief, my unbelief, is entirely irrelevant if belief is all we have to go on. To claim personal belief as confirmation of a "moral panic" is verging on megalomania.

And yet, personal belief is the only basis for the #MeToo backlash, of which Lehmann is a part. Fundamental to that backlash is the weaponisation of the word "victim". It has been appropriated in backlash discourse as an insult, a condemnation, a signifier of the unreliable, the untrustworthy and the unhinged woman, frightened by shadows. It is used entirely to persuade women to keep silent, in the interests not of ourselves, but of perpetrators.

Deneuve, Greer and why #MeToo is not a 'witch-hunt' https://t.co/AXp7T2dGYJ @IndependentAus @noplaceforsheep