Queensland Supreme Court judge Angelo Vasta was sacked by the Queensland Parliament in 1989 on the recommendation of a commission of three judges headed by Sir Harry Gibbs, the former chief justice of the High Court of Australia.

The Commission found five matters which, it said, taken together warranted his removal from office (para 12.2. p163).

This was despite the commission leaning over backwards to excuse Vasta, having given evidence on oath “which he knew to be incorrect” (par 12.3 p163). 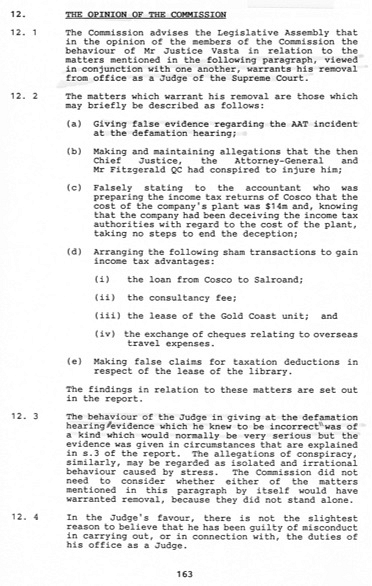 Now Queensland MP Robbie Katter, who was 12 when the judge was dismissed, has introduced a private member’s

'Bill for an act to reverse the removal of Honourable Angelo Vasta from office as a Supreme Court judge' (Hansard, 2/3/17, p468).

Katter said that, over the years, doubt has been cast on some of the reasoning for Vasta’s dismissal.

Alleged taxation rorts comprised three of the five findings against the judge. Another reason was Vasta’s desperate allegations that the chief justice, attorney-general and Tony Fitzgerald QC had conspired to injure him.

The fifth finding was that he had lied on oath during a defamation case in 1986, an act that strikes at the very heart of the justice system. The commission found Vasta had denied that an incident had taken place and that this denial was “false, and deliberately so” (para 3.4.23, p33).

'It must be carefully noted that the Commission emphasised how important it was that the [five] matters...be viewed in conjunction with one another.'

But even if four of these five findings are found to be wanting, is this enough for the judge to be exonerated?

New legislation could clear a judge of any wrongdoing almost 30 years after he was sacked by the government. #9News https://t.co/6pYNclz9hD

'Anyone who deliberately gives false (untrue) evidence for a judicial proceeding is guilty of a crime called perjury.'

'…offences such as perjury and perverting the course of justice are regarded by governments, judges and society as a whole as very serious crimes. The common feature of these offences and the reason why they are viewed so seriously, is the threat they pose to the due administration of justice.'

'The Commission does not accept as true the evidence given by Mr Justice Vasta to this Inquiry in relation to [that] matter.' 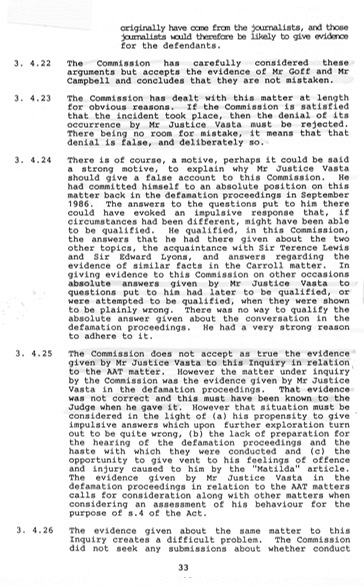 (First Report of the Parliamentary Judges Commission of Inquiry, 12 May 1989, p33)

This was not the only issue on which Vasta was found to have lied.

There was a crucial focus at the 1986 defamation case on the strength of the relationship between Vasta and police commissioner Sir Terry Lewis.

When asked in the defamation hearing whether it was a fact that he was a friend of Lewis, Vasta replied that he was an acquaintance (para 3.2.3, p20). 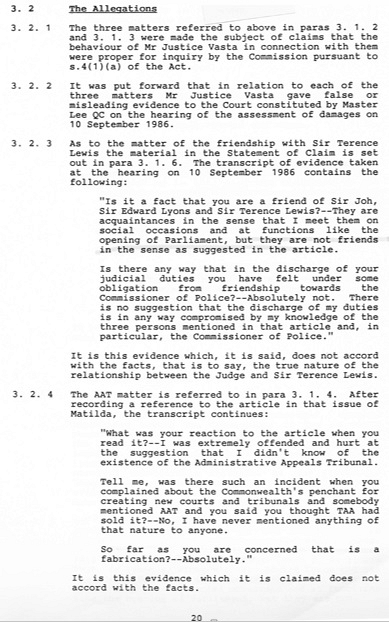 (First Report of the Parliamentary Judges Commission of Inquiry, 12 May 1989, p20)

The commission found that

'...at all relevant times Mt Justice Vasta and Sir Terence Lewis were friends.'

Lewis went much further in a sworn statement to the Fitzgerald Inquiry into Queensland corruption, saying Vasta was one of only five

'... was inaccurate and careless, but not intentionally deceptive.'

There are other issues which point to Vasta’s character.

In the 1980s, Vasta and corrupt Queensland Police Commissioner were friends to the extent that Lewis lobbied Premier Joh Bjelke-Petersen to promote Vasta, first to the position of chief crown prosecutor and later to become a supreme court judge (para 3.6.14, p44).

The involvement of both in the Bikie Bandits Case was another issue examined by the judges inquiry.

In 1983, a magistrate found there was sufficient evidence to commit four police officers for trial, charged with supplying heroin to two men known as the Bikie Bandits. Even the notoriously pro-police Police Complaints Tribunal came out against the officers and found that a total of six officers 'had committed perjury in their attempt to conceal their actions' (para 6.2.1, p96).

The officers were committed for trial in May 1982.

Instead of suspending the officers until the charges had been dealt with, Lewis promoted three of them within days of them having been sent for trial.

The following year, solicitors for the officers requested that the evidence should be reviewed with a view to discontinuing proceedings.

In early August 1983, Vasta, who was then the chief crown prosecutor, was asked to carry out the review. On August 6, he rang Lewis regarding the case.

Two days later, he delivered an opinion that although it might be argued that a prima facie case still existed, the evidence was so totally unsatisfactory that it would be dangerous for a jury to convict. (par 6.3.4, p96)

The commission records that Lewis and Vasta 'were both present at a party to celebrate the dropping of charges' against the police. (par 3.6.4 ii, p39)

The question has to be asked: why would the state’s foremost prosecution officer attend such a party?

In the news: Judge’s sacking ‘dogged my conscience’: Katter... https://t.co/GvseS6iluD

“Angelo Vasta, at 76 years of age, is now too old to be re-admitted. This is about righting the wrongs of the past and the parliament doing the right thing…it is just about clearing someone’s name.”

“I expect now that this legislation has been put forward more people will come out publicly with their views.”

Here’s mine: it would be a travesty to exonerate a man who failed to uphold the 'very high level' standards of behaviour expected by the community of judges. (par1.5.10, p 10).

The explanatory notes of the Bill, now being examined by the parliament’s Legal Affairs and Community Safety Committee, say of the judge’s sacking:

“On 8 June 2017, twenty-eight years will have elapsed since that shameful and unjust act. The time has come to correct that wrong.”

It could be argued that exonerating the judge would not be righting the wrongs, as Katter puts it, it would be wronging a right.

8 March 2021, 11:00am Opponents of a plan to build a town on internationally-recognised wetlands and ...