As Kathy Jackson readies for her next appearance at the Union Royal Commission (TURC) next week, Peter Wicks from Wixxyleaks reports on news they are seriously considering his evidence — along with some serious new Jacksonville weirdness.

THIS WEEK, I received a response to my statement to the Trade Union Royal Commission and the evidence I submitted along with it.

The full response can be seen by the link below, however there are a couple of things to note.

Firstly that the evidence is being treated as a submission and will be used for the inquiry, and secondly that they have taken particular note of my evidence and statement in relation to what Katrina Hart said about me in her signed statement.

This could see Katrina Hart in a world of trouble if she has been found to intentionally misled a Royal Commission in a sworn statement. This is no trivial matter, she might think twice before making statements without evidence from now on — but I doubt it.

Below is a copy of a letter she sent to several people in a failed recruitment bid: 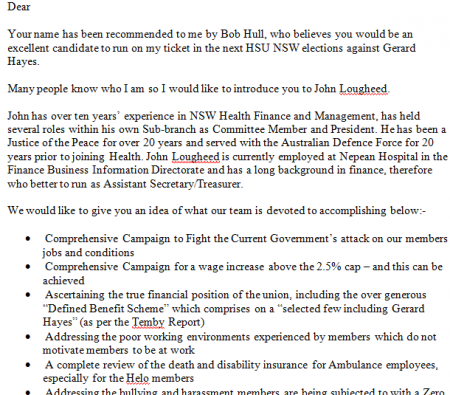 What is strange is that Hart calls her ticket 'Clean Them Out' — but it is unclear who she wants to clean out.

You would assume she means cleaning out factional corruption. However, Hart is backed by Kathy Jackson who, as the Royal Commission is now discovering, is possibly the most corrupt official an Australian trade union has ever seen.

So, maybe she is talking about the faction formerly controlled by Michael Williamson? That would make far more sense — however, looking at her ticket, there are a few of Williamson's people on there.

In fact, one in particular, is noteworthy.

On Hart's ticket is someone called Raymond Tait, who is  a candidate for a senior position. This is the same Raymond Tait who acted as a personal referee for Michael Williamson when he was being sentenced to gaol for defrauding the same HSU members Hart wishes to represent. 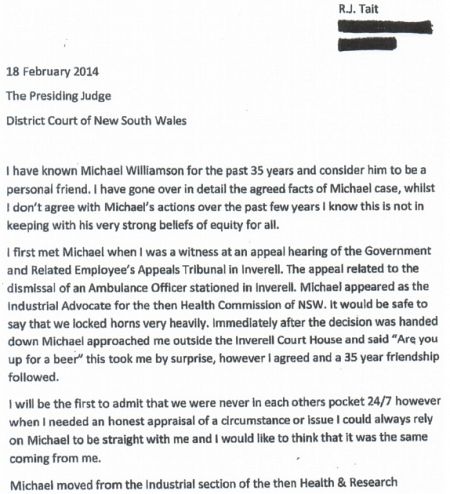 Perhaps she thought the best way to ensure Williamson's friends were cleaned out was to see them put on a ticket sure to lose — her own.

Hart has only recruited Tait onto her ticket so she can desperately try to win support from the ambulance service and paramedic sector, otherwise I’m sure she would be saying that he is another one that needs cleaning out.

I do not mean any of this as a criticism of Mr Tait — far from it.

I actually admire Ray Tait for having the guts to write a reference saying he was Michael's mate and, while he didn’t agree with what he did, he appreciated his friendship. Such honesty within this union is refreshing. If others had half the guts of Raymond Tait, the members would be better off.

Others within the union would appear to have used Williamson’s friendship to get ahead and then gutlessly denied being his mate later, when the going got tough. Some of these people even played both sides in the factional battle — even recently. It would be both ironic and apt if Mr Tait was the only one on Harts ticket to be elected.

Ray Tait has also served as a councillor on Tamworth Council and, from everything I have read, seems like the type of bloke the union members in NSW could rely on. It is a shame he ended up on Hart's ticket and didn’t go it alone.

However, it is not just Katrina Hart who has been taking some desperate measures.

Over on Michael Smith's blog, things seem to have gone way past Jacksonville and have taken an extreme turn into a land that even David Lynch would find strange. Smith’s defence of all things Jackson has gone from the utterly ridiculous to the strangely bizarre.

One example of this was Smith’s post on 14 August which looked at the Peter Mac Hospital settlement with Jackson’s union branch, relating to workers that had not been paid correctly by the Cancer Institute.

It must be a slap in the face for every cancer worker who heard about this ridiculous blog post, as Smith seemed to be saying that Jackson had done a fantastic job in ensuring that the workers did not receive any of the money owed to them and that Jackson had done the workers a huge service by negotiating with Peter Mac to ensure that they will be paid correctly in the future.

Peter Mac agreed to pay workers what they were entitled — what a breakthrough. So, Peter Mac agreed to fulfil a clear legal obligation in the future — that Jackson must be one hell of a negotiator, worth every penny of that quarter million.

If you think I’m exaggerating, here’s what was at the end of Smith’s blog;

'Congratulations and well done to the Chairman of the Board Heather Wellington, the union led by Kathy Jackson and the researchers at the Peter Mac for negotiating that outcome!'

A great outcome indeed. The workers didn’t receive a dime while Jackson went shopping with a cool $250,000.

However, if you think that is strange, how about Smith comparing Kathy Jackson to Princess Diana? I’m not making this stuff up, I swear…

Newsflash Mike. Diana normally graces the front page of magazines like Women’s Weekly and New Idea, Jackson is more likely to be found on the cover of Women’s Prison Weekly or No Idea.

Other people who have graced the front page of newspapers have been Eddie Obeid, Rose West, Aileen Wuornos, Rolf Harris, Osama Bin Laden, and a string of NSW Liberals resigning after ICAC hearings, yet Smith doesn’t compare her with any of these people.

What’s next? Comparing Jackson with Mother Mary and Marco Bolano with Baby Jesus?

Smith’s blog site was also ridiculed for claims that the Royal Commission should have warned Jackson about what she was to be questioned on — as if the Commission itself was behaving illegally.

She knew she was to be questioned on the NHDA account when she took the witness stand, so her decision not to seek legal assistance can only be based on poor advice, IQ and common sense — not the Commissions correspondence or lack of.

This is a Royal Commission, not a babysitter service.

Some of the recent blog posts on the Smith site seem to be written from an overtly legal perspective, in a completely different style from that of Smith, which has prompted many to wonder whether Michael Lawler has added the part-time job of blogger to his CV. Maybe his approximate $400,000 taxpayer-funded position as vice president of Fair Work Commission isn’t enough, so he is blogging for Smith in his spare time?

If this is the case, then it raises all kinds of conflict of interest questions.

If true, can the government really sit back while the vice president of the Industrial Relations watchdog accuses a Royal Commission of breaches of the Royal Commissions Act?

One thing that Smith's site has shown us is that Jackson’s supporters are really clutching at straws when it comes to their defence of her. After all, how does one defend the seemingly indefensible?

One thing is for sure, the week starting 25 August at the Royal Commission, when Jackson is due to appear next, is going to be interesting indeed.