Last week was just another bad week for Commissioner of Taxation, Chris Jordan. How many more bad weeks can he have before he resigns?

First came the news that the Australian Tax Office (ATO) had been vote profiling its workforce on the way they might have voted on the enterprise agreement (EA) and why they voted that way. It now appears other agencies, covering another 53,000 public servants on top of the 21,000 or so ATO staff, have done the same thing.

The Commissioner outsourced the task, which included private employee details, to a company called ORIMA. This was the company who conducted the 2014 and 2015 EA ballots on what is now an effective wage offer of 1% according to the Community and Public Sector Union.

ATO workers have three times rejected the commissioner’s rotten offers. In the last vote, in December, 71% voted against. Maybe rather than profiling his staff he could give them an offer they wanted — one that respected them and recognised their hard work.

Busted: ATO exposed voter-profiling its public servants during industrial ballot
Is there no limit to LNP bastardry?https://t.co/R59gG1w7jX

What might staff think of such action? From my discussions with staff and former staff, they do not like the commissioner and some are angry about this profiling.

Staff dislike him, not only because of the rotten EA offers. This is the commissioner who sacked 4,400 staff in 19 months. Losing 17.5% of your workforce, most of them experienced middle to senior level staff, destroys organisational capacity and memory. It has imposed ever increasing workloads on the remaining tax officers and contributes, in my view, to falling predicted revenue estimates.

Despite this "chainsaw massacre" of staff, the Commissioner last year won extra funding fora Tax Avoidance Taskforce of 1,100 staff — many of whom will be, or are additions to, the current staff numbers, including some of those previously sacked.

The Tax Avoidance Taskforce will cost $679 million over four years and is predicted to raise an extra $3.7 billion. That is a return on investment of well over five dollars of revenue for every dollar spent on a tax officer.

Extrapolating from those figures, if the 4,400 staff the Commissioner sacked had been moved into addressing rampant tax avoidance, or been used to free up other staff to do so, then the cost would have been approximately $2.8 billion over four years, bringing in an extra $14 billion.

Oh but – the apologists will argue – your marginal return would decline. Rubbish. From my experience and even just reading public reports about Apple, Google, BHP and so on, the pit of tax avoidance is almost endless.

Fears for the data of 53,000 more public servants https://t.co/aAWzFzKrxU via @canberratimes

If staff despise the commissioner, big business appears very comfortable with him. They have, arguably, been the main beneficiaries of the loss of 4,400 workers.

For example, the 2014-2015 Tax Transparency Report on big business (the latest available) shows us that 679 big businesses (or 36% of the big business cohort of 1,920 private and public companies) paid no income tax yet had gross revenue of $462 billion.

Disgracefully the Commissioner Jordan said of this:

"There are no surprises here to the ATO."

Actually, there were and are lots of surprises. Certainly, his staff working in big business areas were and are surprised.

Not only that but the commissioner goes on to offer an apologia for these figures explaining that in any year, somewhere between 20% to 30% of big business make a loss in any income year. What he did not tell us in any detail is how that explains the other 6% to 16%, of the 36% of big business that pays no income tax.

Some significant amount of that $462 billion of untaxed revenue at least is, in my view, due to tax avoidance.

Then Deputy Commissioner of Taxation Jim Killaly told a conference in 2010:

If we assume that 20% is a flag for tax avoidance, that means about $90 billion of the $462 billion of untaxed revenue of the big business is worthy of investigation. The ATO does not have the staff or capability to do this.

Even using the Commissioner‘s own market conditions justification for much of the $462 billion in untaxed revenue, that still leaves at a minimum 6% of the 36% of companies paying no income tax unexplained. That translates to about $27 billion of the $462 billion. That is, even before we look at the low taxed companies.

Yet still, the ATO covers for big business. It says on its website:

Move along, nothing to see here then, eh Commissioner Jordan?

The Australian Tax Office produces an analysis called the tax gap. This, according to the ATO, ‘refers to the difference between what the ATO collects and the amount that would have been collected if every taxpayer was fully compliant’. It appears the Office is going to release analysis, so far delayed, that suggests the tax gap is small, around $2 billion.

How is it possible that multinationals like Apple pay so little tax? https://t.co/jKUGUrxoda

For big business alone, this $2 billion figure strikes me as, er ... just a little on the low side. Again, as I said above, read about Apple, Google, or BHP to rebut that idea. Apple alone, for example, has profit shifted $9 billion out of Australia in a decade. BHP is fighting its $1 billion tax bill, and precedent-setting Chevron case is currently working its way through the Federal Court and will no doubt be appealed to  the High Court.

Business is driven by profit and part of that is reducing costs. Business sees tax as a cost and big businesses have the money to employ fancy lawyers and accountants to structure their affairs to reduce "costs" like tax.

As Eric Schmidt, then head of Google, famously said:

"I am very proud of the structure that we set up. We did it based on the incentives that the governments offered us to operate. The company isn’t about to turn down big savings in taxes. It’s called capitalism. We are proudly capitalistic. I’m not confused about this."

Tax structuring is especially tempting and easy for multinationals with their ability to manipulate cross-border transactions and use the non-jurisdiction of the worldwide web to manoeuvre residence into low tax countries like, as Google does in Singapore.

The ATO’s talk about a tax gap of only $2 billion is the logical expression of what is known as regulatory capture. That is where those being regulated capture the regulatory agency — either subtly, through working closely with the agency to produce outcomes that lessen or destroy the impact of regulation, or unsubtly by the regulated taking control of the regulator.

The current commissioner is the creature of big business. He is a former partner in major tax advice company KPMG. He was chair of the Board of Tax and head of then Treasurer Wayne Swan’s Business Tax Working Group. He is the perfect outsider insider.

A crackdown on welfare while the richest pay no tax? It's one promise the Liberals kept | Van Badham https://t.co/G48VBqoMTf

So, if Jordan’s target is not big business tax avoidance, because big business doesn’t do that sort of thing (ha!), who is the Commissioner going to focus on? Yes, you guessed it — working class people.

" ... ordinary wage and salary earners over-claiming for work-related expenses were responsible for the most significant revenue leakage."

This should come as no surprise. The man who sees his own workers as the enemy has extended that ruling class vision to all workers. He has a trickle-down vision of society; he is driven, as one recently retired very senior tax officer put it to me, not by any idea or understanding of the common good but by the idea that what is good for business is good for all. His whole training, background, experience and milieu is big business.

This work-related attack is Jordon’s "Centrelink robo-debt" moment, totally in keeping with the Government’s attack-the-workers approach.

Speaking of Centrelink, it was the ATO which provided the department with the information that has been incorrectly used to frighten poor people into making payments for which they are not liable. The question is: does the way Centrelink has misused the data, by averaging the income date over the year instead of the particular receipt dates, satisfy the requirements of the Data-Matching Program (Assistance and Tax) Act 1990?

The Commissioner has also failed to police and hence protect the superannuation of 2.4 million workers. Employers have pocketed up to $3.8 billion of superannuation guarantees they should be paying to the ATO. The ATO's systems are not robust enough apparently to provide real-time warnings when an employer fails to make the mandated payments.

On top of all this, the Commissioner has overseen various systems outages that have inconvenienced ordinary taxpayers and small business.

Should the Commissioner of Taxation resign? Based on his litany of failures and his pro-business anti-worker approach, my answer is yes. 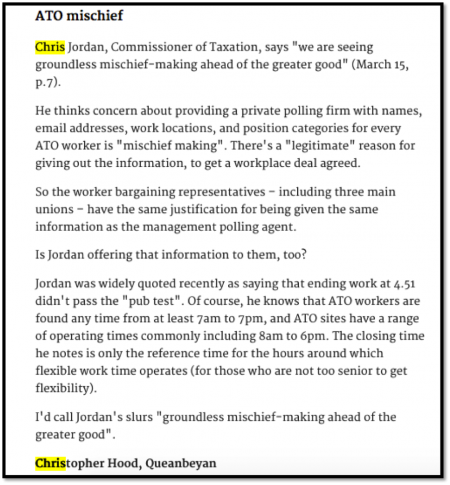 ATO workers united in defence of our workplace rights and entitlements.