Brock Turner typified what can be great about Twitter, writes Noely Neate: that just because you can’t physically get on the dance floor and strut your stuff, that doesn’t mean you can’t join the party and make an impact.

IT IS POPULAR to present social media, and Twitter in particular as this massive echo chamber of outrage and often nastiness. As I have asserted in the past, I strongly disagree and attest that the likes of Twitter are what you make it to be, like real life, your experience will depend on with whom you surround yourself and how you interact.

Brock Turner – or @turlow1 as he was known on Twitter – for me, was an example of how Twitter could be an outlet into a wider world and actually represented all that was good about it. For those unaware, Brock passed away on Thursday, David Donovan has done a very good piece on Brock’s background on Independent Australia: 'Vale Brock Turner: Geezlouise!'.

Often, the anonymity of Twitter will be trashed by louder voices, yet rarely do these talking heads discuss why people use pseudonyms, beyond the obvious likes of expressing an opinion without jeopardising a job, or their particular catchcry of “coward opinions”.

In fact, from my experience, it is often a lot more complicated than that.

There are many, like Brock, who are not hiding from scrutiny, but who just want to expand their social contact and pretty much have a life beyond their immediate surrounds; to discuss ideas and the politics of the day, but without the context of their own physical backgrounds or demographic, which colour and cloud perceptions of you from dot.

In fact, without Jonathan Swan investigating the background of the Ashbygate saga online, the average person who interacted with Brock would not even know that he was disabled? In fact, most did not even know Brock was male due to his choice of avatar [see right], which never changed in the time I knew him.

On the surface, all we knew about Geezlouise was that he

'Likes living through change. Doesn't like liars or secrecy.'

Anyone who actually followed and interacted with Geezlouise knew much more than that. They knew he was passionate about bullshit slogans, they knew he liked a good "discussion" – sometimes rather heated – and he liked to question the politics of the day.

Brock’s real life circumstances were never a focus on Twitter. His interactions were never viewed in the prism of his physical limitation.

I often seethe when I see people say: “Well if you care enough about the issue, get off your arse & march... etc.”

For mine, Brock actually typified what can be great about Twitter. Just because you can’t physically get on the dance floor and strut your stuff, doesn’t mean you can’t join the party and make an impact.

The truth is a disruptive technology. Let's use it #auspol #corruption

One of Brock's last tweets.

I, for one, will very much miss my discussions, debates – hell – even arguments with Geezlouise, as I’m sure will many others.

My thoughts go out to his family and friends. Please know his presence will be missed in the wider online community.

This story was originally published on Noely Neate's blog 'YaThink?' on 12 July 2015 under the title 'RIP Brock Turner, definitely not the wallflower at the dance'. You can follow Noely on Twitter @YaThinkN. 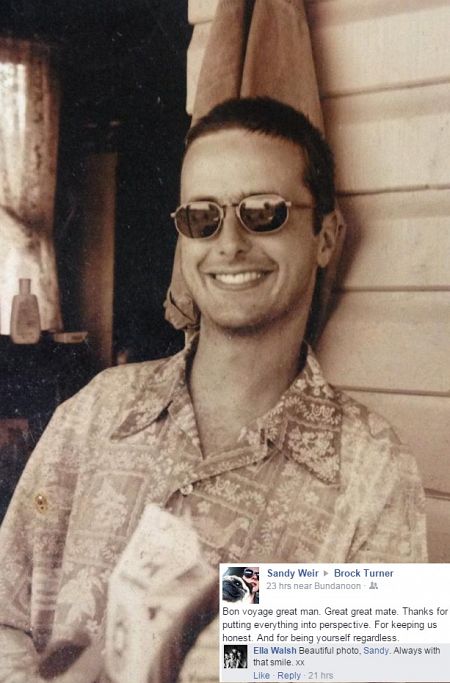 More recent photo of Brock via his Facebook profile.

Power to the people. Subscribe to IA for just $5.