Europe is facing a second wave of COVID-19, yet the rate of cases is not uniform across the European countries.

As the European summer comes to an end, Europe is facing a COVID-19 second wave which has the potential to be worse than the first. The greatest resurgence is occurring in France and the UK with 275,514 and 211,099 new cases between 08/10 and 20/10 respectively.

In response, both nations re-implemented lockdowns in hot spot areas. In comparison, despite Italy being one of the first and most severely impacted European countries during the first wave (since February 2020), it is now considered a model for other countries (93,315 new cases between 08/10 and 20/10), along with Germany (67,081 new cases in the same period). Given that Europe faced the first wave together, why is the second wave resulting in such contrasting responses?

Do the new spikes of cases mean that all the restrictions, the policy and technology interventions adopted so far and the socioeconomic efforts and sacrifices have been in vain? Why do some countries appear to be performing better than others in terms of contagion trends and what might have changed over time in terms of policy approaches across countries? 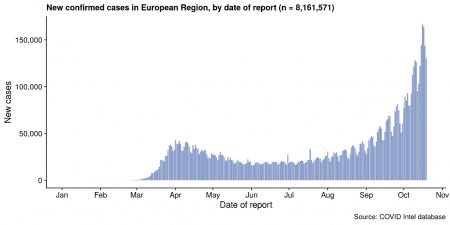 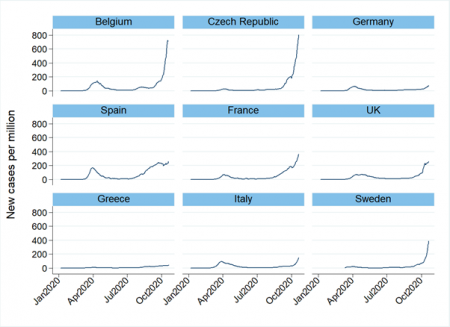 Several explanations could answer these questions: the timing of the outbreak and response strategy; the new tracing strategy implemented; and higher compliance of the citizens with the rules. In this article, we show key metrics and their impact on policy intervention across some European countries with the purpose of shedding light on potential best practices.

The first step towards an evidence-based approach is to identify the key policy objectives currently pursued by countries to face COVID-19. Considering only human-to-human transmission, the objectives can be summarised as: disease elimination, absence of ongoing community transmission, which is typically part of a global eradication goal; and disease control through mitigation or suppression strategies. The policy instruments used to pursue these objectives are similar but differ for their timing and strictness.

Most European countries pursued a disease control objective by implementing a suppression strategy. However, the level of explicitness has been diverse. For example, Germany and France publicly announced clear objectives in March, while Italy did not explicitly have a set pandemic response plan. However, the implemented Italian policies shared common objectives to those in Germany, France and Spain.

Next we look at government interventions over time and compare them with reported health and non-health outcomes at key dates in the intervention response.

These three key intervention points are:

For each intervention we look at the rolling average value of the metrics in the previous 14 days.

Overall, we observe two common trends. First, the tightening and lifting of restrictive measures is driven by the number of hospitalisations, the saturation of the ICU wards and, consequently, the number of fatalities, rather than the increase in the total cases and the transmission rate Rt. Second, there is a significant increase in the number of tests performed compared to the weeks before the release of the lockdowns, which may explain the drastic increase of the contagion curve.

These two trends could explain why France implemented lockdowns targeting specific areas and why Germany and Italy did not, despite all three countries facing an increase in COVID-19 cases. Indeed, even if there is a correlation between the number of hospital admissions and the total cases detected, we note that France enforced new restrictions in September, as soon as the number of hospitalisations and ICU admissions were at the level observed in the two weeks before the lockdown. If we look at a similar metric for Germany and Italy, we notice that the ICU saturation is below the date of the lifting of the lockdown.

This simple analysis shows that despite increased concern for the rise in the total cases, governments are behaving coherently with respect to the policy objectives they aimed to pursue. However, the continuous increase in the cases after the summer shed some doubt in terms of the timing of these interventions.

Australia shares the same suppression strategy used in Italy, Germany and France. Despite the new cases, the number of hospitalisations and new fatalities are much lower in Australia than in these countries (respectively 1.24, 0.68 and 0 per million inhabitants as of 20 October). Stricter measures are in place such as the prolonged closure of the internal and external borders and the complete lockdown in the metropolitan area of Melbourne.

In the absence of a vaccine or a global elimination strategy, the economic and social cost of stricter measures and isolation might not be cost-effective in the long run. The second wave in Europe could suggest to Australia that is possible to sustain a low number of cases and low hospitalisation with the easing of the most stringent measures. And that an even better strategy relies on the testing and tracing strategy, which is already very effective in Australia.

7 May 2020, 12:00pm Australia faces the dilemma about what level of decision-making to apply for a ...
Join the conversation
comments powered by Disqus
News updates