Who knew playing hide-and-seek at night with nature's critters could be so much fun? Frog-friendly Mark David of course.

I LIKE PEOPLE. In fact, some of my best friends are people.

But not all of them.

Because some of them are frogs.

Hawk-eyed readers of Independent Australia might have noticed my previous columns about nature at my place: one was about plovers (Masked Lapwings) and the other one was about spiders. But it’s not all plovers and spiders around here. We also see a lot of frogs. 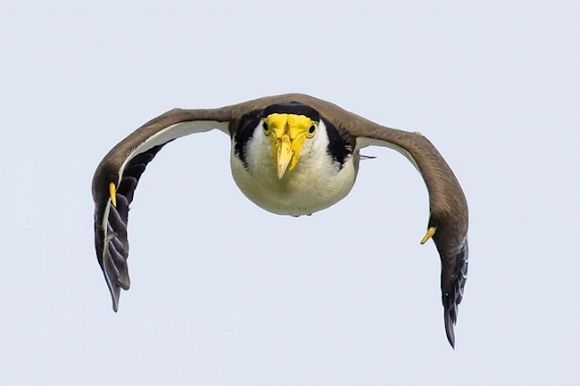 Plovers in your backyard: It's no picnic

Plucky plovers or avian hell-spawn? Mark David describes his experience of living with the "shouty" birds who share his home.

I’m no expert at identifying them. And I’ll come right out and tell you that they don’t make it easy. Many different species of frogs share similar combinations of size and colour, and so any attempt to tell one species from another based on superficial appearance is doomed to involve lots of mistakes.

I bought some field guides hoping I could just look at a frog and then find its picture, as I do with bird field guides. No cigar. Instead, my books told me to do things like study the shape and extent of their toe webbing under a magnifying glass. I’m not saying frogs need to do that to make an ID, but we humans apparently do. And I’m one of those humans who doesn’t bother.

Having said that, I suspect that our place, in Queensland’s Sunshine Coast region, has at least a dozen species and maybe as many as 20.

The most common frog around my place is what my ID attempts suggest as most likely the Eastern Dwarf Tree Frog, also known as Sedge Frog or Eastern Sedge Frog (Litoria fallax). Those guys are little. How little? I’m talking little enough to sometimes fit on a human fingernail.

On rainy nights I’ll usually find some climbing right up the outside of windows and I’ll take pictures of them in the dark using a tripod and long exposures. If you’re wondering why I don’t use a flash, it’s because a flash is likely to just bounce its light off the glass and right back into the lens. And I also fear that the flash could hurt the frogs’ sensitive eyes. For that second reason, I never use flash with any kind of frog photography.

We get another type of frog here. It too is green and a tree frog and in a fit of creative nomenclature, scientists have called this one a Green Tree Frog (Litoria caerulea).

Unlike our little friends the Eastern Dwarfs, these ones can get big (for a frog), with a body length reaching almost 12 centimetres. In true tree-frog style, they too can climb up the windows and when you see that happening you wonder how something so big and seemingly heavy could stay stuck to the glass.

This year has been something of a highwater mark in my Green Tree Frog journey, due to one fairly big specimen that comes into the living room many evenings. I’ll point out here that frogs can’t survive long in our house because our living room is sadly lacking in swamps. Therefore, I have to catch it and return it to the frog-friendly outdoors every time. So, before I go to bed each night, I turn on all the lights, grab a torch and go searching the living room for this free-ranger.

Catching it involves a bit of a routine, which both the Green Tree Frog and I know well.

First, I’ve got to find it. Which is easier said than done. Because it’s in a different place every night — often on the floor but sometimes it’s up a wall or on a table or curled up in a pot plant.

When I find the frog, I invariably get my phone to take some photos. Then I get my proper camera and take some proper photos. Then I wash my hands and approach it with dripping wet fingers. I offer my hand and the frog doesn’t try to escape, but, rather, climbs on board for me to take it outside.

Because, as I said earlier, it’s a routine that we both know well. I take the frog out to the garden where it sits in my hand for a while, surveying the landscape and making its plans. Eventually, it leaves my hand and goes about its frog life again. After dozens of encounters like this one, I’m pleased and proud to report that my nightly visitor appears to be growing and thriving.

The best thing about the Green Tree Frog is that it’s not camera-shy. I can approach it with my bulky macro lens and providing I move reasonably slowly, it will sit and pose like a seasoned professional.

Eastern Dwarf Tree Frogs, not so much.

Just the sight of me approaching from metres away is enough to make these little frogs leap into the cover of dense foliage. The sound of so many tiny frogs jumping into the foliage all at once is similar to the sound of rain. It’s wonderful to hear because it means high frog density, but it also means high frog skittishness and that means your photography is going to be a challenge.

To get a good photo of Eastern Dwarfs you need to plant your camera onto a tripod, focus it to the distance you think you’ll need and then sneak it up to them really, really slowly. All movements and arrangements of camera gear have to be done in super-slow motion. If onlookers ask why you’re moving so incredibly slowly, just tell them you get paid by the hour. That won’t satisfy the onlookers but it will satisfy the frogs.

In a good frog summer, I might find up to half-a-dozen tree frogs on a single small bush. That’s good news for multiple reasons. First, because I like frogs and second because when adult mosquitos emerge from their pupa skins in water, they will usually head for some nearby foliage to settle before they come into the house.

With large numbers of hungry frogs in every bush, it means no mosquito can survive the experience. Therefore in a good frog summer, we get no mosquitos.

I can’t think of a better reason to be friends with frogs than that.

1 July 2022, 10:00am Not actual car crashes — the carnage of current mainstream media reporting.

17 June 2022, 9:00am Someone needs to tell him he's not running the country.
Join the conversation
comments powered by Disqus
News updates