Puppy factories and their lobbyists under the spotlight

I have written extensively recently on the desperate bid by lobby organisations for the puppy factory industry as they struggle to stay afloat in the face of government crackdowns, and public outrage and hostility.

One of those lobby groups is the Australian Association Of Pet Dog Breeders (AAPDB).

Despite its title, this association represents no registered breeders at all, but rather is a lobby group for the puppy factories.

The head of the AAPDB is a woman called Jodi Knox. Jodi Knox has more than a slightly vested interest in keeping the puppy factories up and running, she owns one, it is called Murray River Puppies.

It is hardly surprising that the AAPDB has chosen to endorse her puppy factory, given she runs both the factory and the association. Audits showing efforts beyond requirements would appear to be like a kid setting their own homework and then marking it.

'Welcome to Murray River Puppies Pty Ltd, established in 2003, a business created by demand and developed on years of experience.'

Given years of experience is clearly something that Jodi holds in high-esteem, I thought maybe we should have a look at exactly what that experience was.

According to previous statements on Murray River Puppies, Jodi's experience pre-dates the 2003 opening of the Murray River puppy factory.

Independent Australia has documentation that highlights both where that experience came from and its nature. Some of this documentation is linked in this article

As the property title below shows, the mailing address for the Strathbogie Puppy Factory was a PO Box in Cobram. The same town Murray River Puppies is located — fittingly next to a graveyard on Cemetery Road. 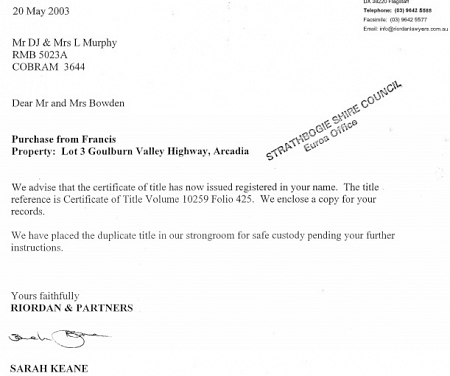 When this property was raided by council in 2005, it was reportedly one of the worst sites of wanton animal cruelty and neglect that this country has ever seen.

Imagine starving animals living in tiny cages and their own filth and faeces, many sharing their cage with other animals that had already perished from disease, malnutrition, wounds that had turned septic after being left untreated and so on. These are just just some of the allegations backed by documentation that make up the dossier I have on the factory. 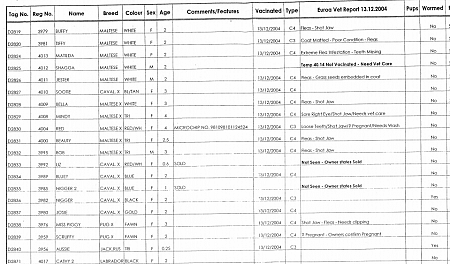 The vets invoice to council linked below also paints a picture of depravity, with a total of 60 necessary vaccinations, one euthanised cat and an astounding 17 dogs in such a condition of neglect that the vet had no choice but to euthanise them.

As stated in a leaked email from the Council's compliance officer at the time, Stuart Lansley, the reason the dogs were not seized was seemingly purely financial:

If we seize these animals we would have a duty of care to provide that treatment as the legal custodian….

That $15,000 is just the dental; add to this the cost of vaccination, flea treatment and other medical needs, as well as feeding and accommodating these animals and clearly the Council had concerns over the cost of seizure.

In another email, Lansley discusses the sites prospect for code compliance saying:

'As things stand at the moment I still have 50 plus dogs to re-house because of the last audit done by Stephanie and the Bureau (Bureau Of Animal Welfare). They do not believe the premises can be made compliant therefore we have to get every dog out or destroy them over the next few weeks.'

This history is apparently the "experience" Jodi Knox considers a feather in her dog breeding cap.

Many of the dogs from these premisses, which the vet had declared unfit for breeding, were rehoused in unknown locations.

Given the questionable history of the AAPDB and the experience that Jodi Knox (pictured right) appears to regard so highly, I thought it might be appropriate to ask her a few questions; I sent her an email with the following queries:

After a few days without an response, I called Knox, who confirmed she had received the email but refused to respond to any of the queries.

It is passing strange that one of the leading lobbyists for the puppy factories can’t even manage to speak up for herself.

It is also worth noting that PIAA (Pet Industry Association of Australia) endorse all of the puppy factories specifically represented by AAPDB.

For these people to have written submissions to government regarding legislation related to breeding is in my humble opinion akin to Ivan Milat writing submissions concerning hitchhiker safety.

The problem of cruelty in the breeding industry should not be discussed with people like these. In my opinion these people are the problem.

To grant these people an audience does nothing for a politician’s integrity either and their participation in the NSW Parliamentary Inquiry should be viewed with a more than healthy dose of scepticism.

There is a tendency by the National Party, in particular, to support these people under some sort of strange notion of offering help to struggling farmers. However, hitching your Party's wagon to purveyors of animal cruelty does nothing to assist the struggling family on the land.