Protecting the fragile soul of humanity


People must stop turning a blind eye to those they know, or suspect, are preying on the most innocent and vulnerable citizens in our society, says contributing editor-at-large Tess Lawrence.

People are raping babies – sometimes their own – and filming this depravity and putting the images online.

We are right to be concerned about the cybergalactica of children and teenagers and bullying cowards who hunt in marauding packs on social networks.

But who is watching what we adults do offline and online to our babies and children? It is out of line.

We have to confront the fact that child pornography has reached pandemic proportions. And not only in Australia.

It is so prevalent it might as well be listed as a national sport, with a membership far greater than the AFL.

'…executed 19 search warrants across Australia over the last week, arresting men between the ages of 21 and 64'.


"Each child exploitation image is considered a heinous crime scene that the AFP will not tolerate.....If child predators think that they can avoid being detected they should think again."

There are hundreds of thousands of 'child abuse images and videos' involved. That's just in this particular vile cybercoven.

Some of these men are fathers. What sort of gross moral turpitude is it, that renders a parent capable  of raping their own babies and children and inflicting such cruelty and pain. What abject betrayal of humanity. And each time that image is viewed by another creep, that child is raped yet again, and again: cyber pack rape. Raped simultaneously by thousands of people.

For every arrest and conviction that is made in relation to cybersex crimes against children is invariably a network that can involve an international web of millions of predators and perpetrators.

We know such sexual violence against babes is often a mainstay of war and revenge, of mythology, and religious tracts. But these cybercrimes do not easily fall into that category — although this is a war against our own babies and children for sure.

The perpetrators will most likely look no different from the rest of us. We will pass them in the supermarket aisles, sit next to them at the footy, perhaps go clucky and ooh and aah at these very  babies and infants. They may be our fathers, our stepfathers, our brothers, our cousins, our sons, our bosses or a male close to our mum.

We cannot afford to think these predatory psychopaths are monsters belonging to another species. They are not. They are among us and of us. They are spawned from society's loins. We share the same DNA, even if we do not share the same inclinations.

It is horribly confronting. But confront it we must.

Now, we know such people graduate from worse to extreme and continually have to up the ante in order to gratify themselves.

Now, we understand and know that sex offenders and paedophiles (as then) are drawn from all walks of life and gender configurations.

Moreover, they invariably have access to, and are savvy in, sophisticated peer to peer technologies.

The women in their lives may be the complicit handmaiden to the male's arrested sexuality and burgeoning arousal that needs to be constantly fed on depraved acts that may need supplementing with increasing levels of violence.

Or the women may deny all knowledge of such activities. They may be in denial. It is unlikely that they would be totally oblivious to acts and injury perpetrated on their own babies and children.

Often women are trapped. They can be dependent on these men, held emotional and financial hostage and incapable of breaking away — and in fear of their own lives and the lives of their children.

Hardly a week goes by without some police announcement on cybersex crime.

This is baby/child sexual slavery, no question. All nationalities are involved. It was presumed that pornography involving minors was the province of poorer developing countries supplementing family incomes and tourism on the ground and online sexual tourism in the air; more often to satiate the appetites of western men in industrialised and so-called developed countries. Like Germany and Australia; the latter to such an extent that Australia introduced new laws and penalties for child sex tourism.

That child is someone's son or daughter. These are our children. Don't we share in the responsibility for their wellbeing?

Today marks the start of National Child Abuse Prevention Month in the US. In an article he wrote on his website and also published on The Huffington Post, Democrat Senator John Kerry (Massachusetts) quotes the Department of Health and Human Services as saying a child is abused or neglected every 36 seconds in the States.

Every statistic is a victim. And the impact of these crimes upon the victim are often life-lasting and can severely contaminate their relationships with others.

So too, can the impact of the perpetrators upon their families and others. Last week in South Australia, Peter Marshall, the 58 year old so-called adopted 'son' of notorious paedophile and former children's TV host Ric Marshall, was himself sent to 12 years prison for buggery and persistent sexual exploitation of a child.

The conduct of online paedophiles often intrudes upon innocent activities and bonding in family life. Some parents agonise about when it is appropriate to stop sharing the bath or shower or bed with their little tackers.


‘The sexual abuse of children is a serious social concern in Australia.

‘According to the Australian Bureau of Statistics’ (ABS 2005) Personal Safety Survey, 12 per cent of women and 4.5 per cent of men in Australia report having been sexually abused before the age of 15 years.

‘The Australian Institute of Health and Welfare’s (AIHW 2010) data on child protection indicate that during the 2008–09 financial year, there were 5,591 substantiations of child abuse notifications for sexual abuse of children aged 17 years or less.

Many of us have been brought up to believe in the sanctity and sanctuary of the family unit - whatever 'family unit' might mean today.

So often, after horrendous crimes, including murder and murder suicides have been publicly exposed, other family members, friends, and neighbours concede that earlier, they saw bruises, heard screams, or harboured suspicions that all was not well.

We are understandably scared about reporting things to the police, because of the real potential of reprisal and being dragged into the vortex of ugliness. Moreover, how many of us have made reports to the police, or other regulatory institutions, only to be met with indifference.

So often, it is only after people are dead or injured that the authorities will step in.

And there is the ridiculous animus towards the 'dobber' or 'whistleblower' in the Community.

Such people are real heroes. Invariably, it is a thankless task and brings grief and even isolation upon those who are prepared to step forward from the shadows and do the right thing.

But don't forget that with Crime Stoppers, you can provide information anonymously. And it is recorded so the police at least have to properly evaluate the information.

How many little lives and families could we save, just by making this single phone call?

The other week I learned that those extraordinarily lifelike baby dolls do a roaring trade as a sex aide for paedophiles, who prefer them to your run of the mill, blow up doll, that is too 'old' looking for them.

We should be warned that if we think this is a viable and better alternative for the paedophile than raping a baby, we need to think again.

I am told that after such novelty wears off, and the paedophile is no longer aroused by using these avatar babies as a substitute, the heartless predator could be more inclined to seek out human baby prey that has a real heartbeat. 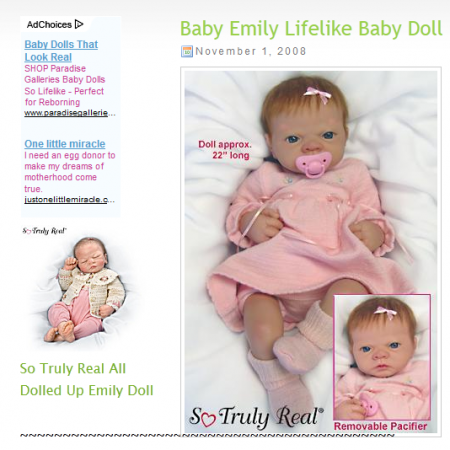