The NSW Government is ignoring its own guidelines to build a Highway upgrade through nationally important population of koalas. Sue Arnold reports.

The site of sacrifice is section 10 of the Woolgoolga to Ballina Pacific Highway Upgrade. Instead of developing a route through nearby flat cane fields, NSW Roads and has elected to ram through pristine forests. The Highway Upgrade will result is the loss of around 90 hectares of koala habitat, nearly 40% known to be supporting resident koala populations, estimated to be around 196 adult koalas.

Around 50% of the preferred food trees will be cleared for construction.

As the "important population" designation was an inconvenience to the State and Federal governments:

... the Department of Environment revised its Koala referral guidelines. The revised guideline does not require that ‘important populations’, as defined the Department of Environment’s Significant Impact Guidelines 1.1, to be identified in undertaking impact assessments due to the paucity of information about the distribution of koala populations across the range of the species. The guidelines now focus on habitat assessment, field survey, consideration of the severity of potential impacts and the likely success of mitigation as main factor in assessment.

This statement ignores a mountain of research demonstrating that virtually all koala populations in the state are in decline or extinct.

In spite of major efforts by scientists, lawyers, conservation and community organisations, in the next week, NSW Roads and Maritime Services (RMS), will begin an effort that can only be described as an environmental holocaust. What was once an “important” population will be trashed in the obscene haste to finish the Pacific Highway.

Firefighters have been working around the clock in an attempt to contain and out-of-control bushfire, burning south-west of Wardell. pic.twitter.com/YGlhw7rtvl

On September 5, a major bushfire burned over 350 hectares in the s10 Upgrade footprint, destroying koala and long-nosed potoroo habitat. The Rural Fire Service (RFS) described the fire as “hot” as it crowned eucalypt trees.

As the area has extensive peat (known for the turf’s long term burning capacity) there have been several further outbreaks and the risk of more fires is high. Firies and locals have also warned that, in the event of another major fire, animals will be trapped behind temporary and permanent exclusion fences erected by the RMS to allow construction to proceed.  There are no evacuation plans or escape routes for panicked animals.

The recent fire burned out the southern side of a local road known as Old Bagotville Road. A significant number of koalas is regularly sighted on both sides of the road. The RMS had previously erected temporary exclusion fences and “escape hutches” along a large section of the road, as the RMS intends to open up the two quarries at one end to allow trucks to access fill for the Upgrade.

Any koalas remaining on the burned area side are unable to access healthy habitat across the road as they cannot climb over the fences and the escape hutches are so badly designed that the only animal ever sighted using one, according to the NSW Environment Protection Authority (EPA), was an echidna. 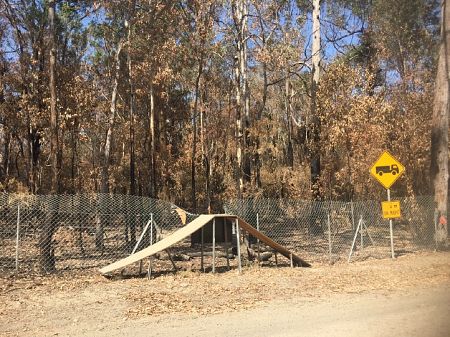 A koala would need to be Harry Houdini to make it up the RMS escape hutches (Photo: Norm Sanders)

Bushfires have not been recognised by the RMS environmental documents as a major threat, with the likelihood rated at 3% in their modelling. In spite of this unrealistic estimate – the fuel load in the area is very high, with no major fires for over 30 years – the model estimates a 40% mortality of individuals living within the fire boundary (that is, 10%) of the population (population visibility analysis (PVA) model).

David Milledge, an expert wildlife ecologist, sent a report to the Federal Government saying the modelling was flawed:

The modelling has not taken into account the increased potential for a wildfire event to cause the extinction of the eastern sub-population as a result of construction of the Upgrade. The vegetation communities east of the Upgrade route are highly fire-prone and the majority within the area have not been burnt for up to 40 years, resulting in a very high build-up of fuel loads. If a wildfire event occurred in this area, strategies for containment most likely to be adopted by the NSW Rural Fire Service would be to put the fire in a "box", which would entail a back-burning operation along the eastern edge of the Upgrade route as well as around the Wardell township, or alternatively, to let the fire burn up to the edge of the Highway. This would almost certainly eliminate most if not all of the Koala habitat supporting the eastern sub-population as well as resulting in the deaths of most Koalas in the population, likely to be exacerbated by the barrier effect of permanent exclusion fencing along the entire Upgrade length. 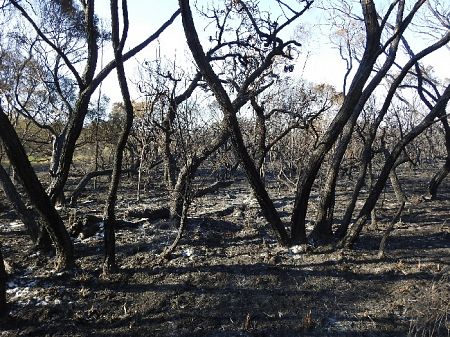 According to RMS reports, in the next week, contractors will begin logging almost 600 koala feed and shelter trees on four fronts. Blasting will begin in the two quarries at the end of Old Bagotville Road, with massive increases in noise, dust, vibrations, flashing lights and reversing alarms. 300 trucks a day plus 100 cars, including heavy machinery, 120 tonne excavators and 50 tonne trucks, will remove more than 300,000 cubic metres of rock and earth from quarry sites. This activity will happen six days a week for at least the next six months.

No underpasses or overpasses have been constructed on Old Bagotville Road.

However, a phone call to an EPA bureaucrat last week ascertained that the RMS has now re-interpreted this provision to mean that as Old Bagotville Road is a 'temporary road' whilst fill is extracted from the two quarries, there is no necessity to provide safe crossings. When the amount of fill has been extracted, the RMS will 'take down the fences'.

Propaganda has become the latest weapon used by the RMS.

'We are monitoring koalas to ensure they have access to food and water.'

It is entirely unclear how RMS can undertake this monitoring, who will be responsible, how long it will go on for and where access to food and water will be. Locals wonder if perhaps the RMS staff will be putting out bowls of water and leaves. 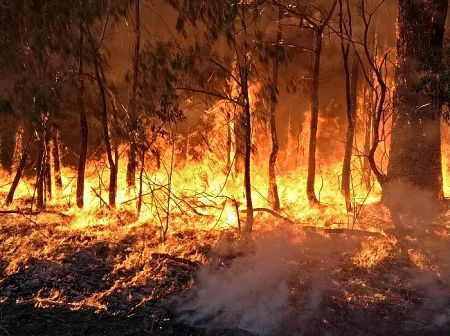 '... surveys done before and after phased resource reduction have found koalas are outside the clearing footprint. Survey reports will be published on our website.'

No surveys can be found on the RMS websites. These surveys should be publicly available.

Under current conditions of consent, the only restriction relevant to clear-felling trees with a koala present is to wait 24 hours for the koala to leave.

There are no studies or radio collaring to ensure that koalas driven from their home range have access to, or find, other suitable habitat.

Adding to the tragedy is the fact koalas are right in the middle of breeding season. RMS have ignored the advice and recommendations from the NSW EPA and the Australian Museum paper on the impacts of roads on koalas that no construction should take place during this important time.

Phone calls, emails, lobbying efforts, lawyers’ letters, massive social media protests have all fallen on deaf ears. The Upgrade is subject to both NSW and Federal government approvals as many threatened, vulnerable and endangered species are impacted by the construction. Designated a Stage Significant Infrastructure, legal options are extremely limited, with the cost of going to Court beyond the budget of most environmental organisations. Pro bono senior counsel and barristers are desperately needed in these environmentally destructive times.

There’s little doubt, given the plethora of recent reports on land clearing and the catastrophic losses of native species in Australia, that the major political parties are pursuing brutal policies of extinction for this country’s unique wildlife. Koalas are known to have been killed by being thrown out of trees during highway clearing (Photo Friends of Ironbark Forests via echo.net.au)