The Speaker's Office has just released this transcript of Speaker Bronwyn Bishop's fundraiser speech in support of her claim that her appearance in Geelong was in her capacity as speaker, and not as Liberal party hack, serial entitlements rorter and burden on those among us who actually pay taxes.

My dear, dear friends… I am with you today not in my capacity as a warhorse of the party, but as the Speaker of the House of Representatives. [Groans]

It is my intention to tell you in some detail how the Speakership works, its technicalities [More groans] and how the position can be used to stick it up Labor. [Sustained cheering]

You are all probably aware that I now hold the record for kicking the bastards out of the House [Excited foot stomping], and you are probably also aware – those of you who regularly tune in to Question Time – of how I have elevated the Speakership above mere pedestrian partisanship and turned it into an art form of political bias. [Yes, yes! Go, Bronnie!]

But enough of the Speakership… [Hooray!]

Didn’t you just love the way I descended from the clouds to be here among you today? [We did! We did!] All at taxpayers’ expense! [Woohoo!]

Not, of course, at your personal expense, dear friends. I can tell by the most cursory examination of your gimlet eyes that you’re all far too savvy to be paying personal income tax [ha, ha, ha!] and will all be well protected by your various dodges and schemes. [You bet!]

I do have some potentially sadder news to pass on to you… [Oh, no! What could it be? Don’t do it, Bron!]

Mrs Bishop’s words are inaudible for twenty seconds amid the general consternation and hubbub.

Nevertheless, it is by no means certain I will get this plum overseas posting [Thank God for that!] and that I will be able to fly down the Geelong road [Tittering] and share your next fundraiser and fine champagne and Portarlington mussels.

I do quite a lot of these things, you know… Sometimes I travel by Lear jet, should the distances be onerous – say from the Melbourne CBD to Toorak party headquarters – less frequently by luxury limousine [WTF!?]

Some say I am out of touch... [Never! How can she be out of touch with such a rigorous travelling schedule? Exactly! Just what I told my husband this morning!], some say I should step down and make way for a more contemporary hairstyle … [No, no! Stay, Bron, stay! We want Bronnie, we want Bronnie! When do we want her? Now!!]

My friends, you have me!... [Yay!] I’m yours for the night!... [Guffaw] Now let’s get down and dirty! [Mixed gasps and footstomping gradually becoming prolonged stomping] 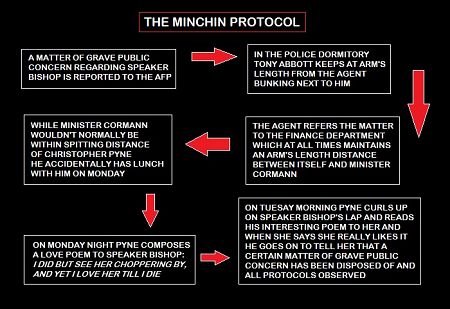 Editorial: If Bronwyn Bishop claimed trip as official business, she must resign http://t.co/VH97CSoyum via @smh

Be of good conscience. Subscribe to IA for just $5.

Order the above John Graham original by clicking here.