THERE WILL BE NO slut shaming of veterans, according to Minister for Veterans' Affairs Dan Tehan.

Do you believe him?

In our recent article headlined, 'The bureaucratic "slut-shaming' of vets and Centrelink victims, I discussed the Veterans’ Affairs Legislation Amendment (Digital Readiness and Other Measures) Bill 2017,  describing it as illegal, intimidating, malicious and cruel and unnatural punishment.

I stated that it allows politicians and bureaucrats to become judge and jury, and executioner:

Whilst the Turnbull Coalition has ruthlessly put a gun to the heads of our more vulnerable brothers and sisters, a flaccid and disingenuous Opposition has conspired with the government to pass a bill (on its third reading) that gives bureaucrats the authority to reveal personal intimate details and case histories of those pensioners and recipients of welfare benefits and social security who have publicly criticised the government and its institutions.

This is bipartisan support at its ugliest and political expendiency writ large.

... What is more, the government does not have to seek approval to release personal data about veterans and other Centrelink recipients.

It is to be the price paid by those who dare to speak truth to power. It cannot stand.

The Bill is nothing more than an attempt by politicians to blackmail critics into submission and silence, and is clearly a threat to warn off anyone even thinking of becoming a whistleblower and seeking refuge within the media to expose political and government incompetence, bullying, corruption, cover-ups and stuff-ups.

In a letter emailed to me on Tuesday, the Minister for Veterans' Affairs personally responded to our article, insisting that this preposterously legally unsafe and porous legislation:

The Bill provides the checks and balances to stop abuses of power. It does not allow veteran's personal information to be given to anyone that shouldn't have it. 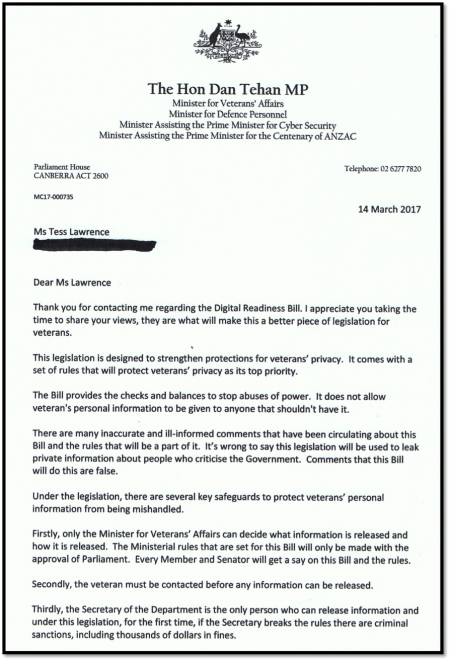 Ignorant sod that I am, I beg to differ.

Alluding no doubt to my article, the minister writes:

'There are many inaccurate and ill-informed comments that have been circulating about this Bill and the rules that will be a part of it. It’s wrong to say this legislation will be used to leak private information about people who criticise the Government. Comments that this Bill will do this are false.'

... there are several key safeguards to protect veterans’ personal information from being mishandled.

Firstly, only the Minister for Veterans’ Affairs can decide what information is released and how it is released ...

Yes Minister Tehan, but you and your ilk cannot be trusted to do the right thing. You've already proved that.

You are not trusted by many of your own bureaucrats and you are certainly distrusted by the people.

What part of "we don't trust you" don't you get?

After all, it was Minister for Human Services Alan Tudge who abused his power and privilege to viciously release intimate and private details about journalist Andie Fox — a single mum who'd written a powerful and compelling no-holds-barred article for Fairfax Media accusing Centrelink of "terrorising" her over sexually transmitted debt from her ex-partner.

But wait, there's more from Tehan:

Secondly, the veteran must be contacted before any information can be released.

Thirdly, the Secretary of the Department is the only person who can release information and under this legislation, for the first time, if the Secretary breaks the rules there are criminal sanctions, including thousands of dollars in fines. 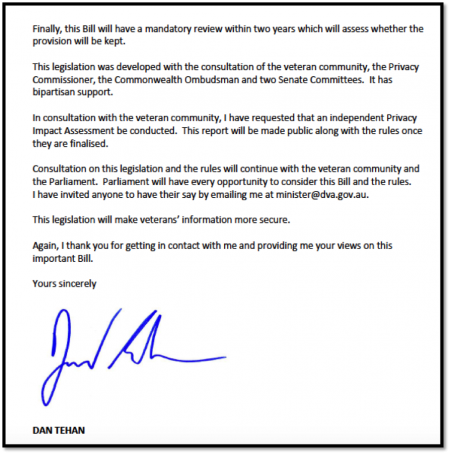 TEHAN SAYS VETERAN COMMUNITY WAS CONSULTED — AS IF

Oh yes, before I forget, the minister confirmed to me that the veteran community had been consulted.

That makes it alright then, dunnit?

Strange then, that a mere three days later, on St Patrick's Day, well-known patron saint of dodgy ministerial snakes (sorry dear snakes) when talking up the non-existent virtues of this shonky Bill to veterans attending the RSL conference in the ACT, the Honourable Minister for Veterans' Affairs Dan Tehan failed to inform his audience that they had been consulted and also failed to thank them for their consultative efforts.

SO WHY DIDN'T MINISTER TEHAN MENTION THIS TO RSL VETS?

Why do you think that was so? Wouldn't you think telling the Diggers that the legislation was developed with their help would ameliorate any justifiable concerns within the veteran community that no proper, earnest and widespread consultation process had taken place?

Besides – and this should be writ large – consultation is not asking for advice and ignoring it.

But Minister Tehan is greatly in need of some assistance himself.

In his posting on his very own grown up ministerial website about the RSL conference, he reveals he hasn't got a clue about the Veterans' Bill or he is deliberately misleading us. I moot both.

I am sick and tired and much ashamed of what is being done to veterans in our name.

There are thousands of vets in Australia. The statistics say it all.

On the whole, they are treated most shabbily and without respect. They are human beings and today I am not going to quote statistics. I'm an advocate for several of them.

Older vets are subjected to what can only be kindly described as elder abuse by the system.

Younger vets, so often lauded in ceremonies that almost deify the ANZAC legend and its inherited tradition in the public arena by politicians are, in daily bureaucratic reality, subjected to humiliating and intense forensic scrutiny that has, it grieves me to say, led some to kill themselves, often leaving behind partners and children.

I know veterans who have nothing but contempt for such military ceremonies, marinated in blood and artifice for the vainglorious spewings of various prime ministers and hypocritical defence leaders of the day who do nothing while in military office and yet spout vacuous rhetoric in civilian office.

So many of our homeless are veterans. Thousands of them are lost refugees in their own land, like many of our Indigenous brothers and sisters.

I know some. Because of my own homelessness, I have sat with them under bridges and on park benches, and in bushes near park benches and lighting. On some nights, they have watched over me — urging me to sleep. I felt quite safe.

I was made homeless because of the National Australia Talibank.

But my veteran mates were made homeless by the Department of Veteran Affairs and successive governments.

They survived the likes of the Taliban, Al Qaeda, and other disparate and desperate groups, and in Vietnam, Iraq, Afghanistan and elsewhere, only to be irreparably wounded by their own country; no odd angry shot this.

Guns remain trained on their headspace to this day; they have to prove to the system they're not just another military lingerer looking for a lifelong meal ticket pension, like that enjoyed by some of our corrupt politicians.

JUST THE OTHER DAY ANOTHER VET SUICIDE — WE KILLED HIM

Just a day or so ago, I heard of yet another suicide. This time of a 24-year-old veteran who just couldn't take it anymore. He leaves behind a wife and child.

Twice before, support from his mates stopped him suiciding.

I'm unsure if he contacted them the third time the cock crow'd.

Comment: As a struggling single mother, Centrelink terrorised me over ex-partner's debt. https://t.co/RIdvRaDN4H