With Kathy Jackson again failing this week to turn up to the Federal Court action against her by the HSU, Peter Wicks from Wixxyleaks looks at the multi-million fraud claims against her, which dwarf those of any she accused.

It feels kind of weird to be following the lead of the mainstream when it comes to Kathy Jackson, but given they are on the same page as me now and have far greater resources, I guess I’ll become accustomed to it.

However the revelations that surfaced this week regarding her are really nothing new, just some extra details on what HSU members’ money was being spent on by Jackson.

On 1 August, I gave a tally of the questionable spending I was aware of by Jackson, which I tallied up to approximately $1.7 million. At the time, I mentioned that some of the $1 million in credit card expenditure would have been legitimate spending — we are now starting to see details about some that allegedly wasn’t.

Evidence presented to the Federal Court shows some expenditure that union members allegedly footed the bill for was on Jackson family holidays. These included multiple trips to Hong Kong, New Zealand, Port Douglas, the Gold Coast, and multiple ski trips to Falls Creek and Mt Buller.

I wonder if the Fair Work Commission vice president appointed by Tony Abbott, Michael Lawler, took any of these member funded trips with her.

This new evidence formed part of the HSU National Office’s claims against Kathy Jackson for civil damages before Federal Court this week.

With the new credit card expenditure evidence, the total civil claim against Jackson is approximately $1.4 million — well in line with the amount I had calculated in August.

(At the time of publication, IA has sighted the evidence in the Federal Court matter but, for legal reasons, we cannot publish them in full as yet.)

With Kathy Jackson facing this much in civil claims, maybe disgraced former shock-jock and blogger Michael Smith should start looking for a new granny flat to bunk in…

Kathy Jackson also stands accused of double-dipping on her annual leave, by claiming a total of 1,318 hours twice. Maybe all that spending was such hard work she thought she needed extra holidays?

Also part of HSU acting national secretary Chris Brown’s affidavit was a list of cash cheques Jackson had allegedly withdrawn from the HSU #3 Branch account. In under three years, between 2007 and 2010, these cash cheques totalled $230,037 — the bulk of them allegedly being drawn without the BCOM approval Jackson has usually tried to rely upon, in the past, to deny culpability.

Bear in mind, this total is from a separate account to the NHDA account, to which Jackson has sole access, that contained the $250K she received from the Peter MacCallum Cancer Hospital so the hospital could avoid paying workers $3 million in unpaid entitlements. This means the $230k in cash cheques does not include the two cheques Jackson gave to her ex-husband for $50K and $58K.

According to Brown’s affidavit, some of the cash cheques were used to help pay for holidays and some went into Jackson’s mortgage account.

Five of these cheques, totalling $24,000, were allegedly signed by Kathy Jackson during 2008 while she was not even an employee of the branch, let alone an officer. It may as well have been me signing the cheques for all the authority it allegedly had. 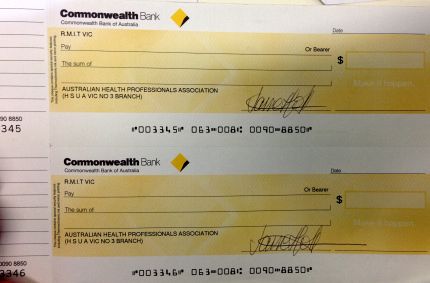 This time in Federal Court there was no phone-ins from Michael Lawler while birds sang in the background. Jackson was once again a no-show and nobody showed up on her behalf in person, via phone, or via Skype.

Jackson claimed to have been sick — something impending doom and bankruptcy may frequently be seen to bring on. Mark Irving, appearing for the HSU, wasn’t so sure about the sudden illness given Jackson had allegedly failed to comply with court orders to appear 17 times before.

Well Jackson has until 10 October 10 to make a submission to the court and then, on 14 October, she is due to face the Federal Court. Maybe this time she may even grace them with her presence? Stranger things have happened.

The HSU has made application for a summary judgement on the matter, which may leave Jackson facing around $740k in civil claims, payable to the HSU.

If a summary judgement is granted by the court, it is then expected the matter will then be referred to Victoria Police for criminal investigation.

If the summary judgement is granted, it is also expected that the $660k in credit card expenditure will be referred to the Fair Work Commission to retrieve on the Union’s behalf, once again putting Vice President Michael Lawler in an awkward position.

If the summary judgement is not granted, it will likely be added onto the civil proceedings before the Federal Court, which will then total around $1.4 million.

This is substantially more than the combined sums of those Jackson claims to have blown the whistle on.

For those of you who think this new information on credit card expenditure is the evidence Jackson was seeking to keep suppressed from Chris Brown’s witness statement, think again. This is not what we are waiting on the Royal Commission to decide as to whether they will allow it into evidence.

This, of course, means that there are even more allegations yet to emerge relating to Kathy Jackson’s behaviour.

Some people who I have spoken to suspect Kathy Jackson may be currently working hard to hold onto the money by shifting it around to avoid giving it back to union members that she allegedly ripped off without a passing thought — perhaps even by putting it into the name of her partner, Michael Lawler.

The irony of this suggestion is not lost on me.

Rewind the memory back to a couple of years ago, when Craig Thomson was the most poisonous name in parliament.

There we had Tony Abbott, his heart apparently bleeding for the long-suffering members of the HSU, telling everybody with a long face how bad he felt for these poor ripped off workers.

Now that the woman he described as heroic ‒ a Joan of Arc of the union movement, no less ‒ and someone he admired greatly is being taken to task for allegedly defrauding the same members of more than 50 times the amount Thomson is appealing his sentence for, Abbott is noticeably silent about the “poor workers”.

If she tries to hide the members money via the Tony Abbott appointee Michael Lawler, the damage that could be done to Abbott and his government should be significant indeed and the Fair Work Commission ‒ which relied almost solely on Kathy Jackson’s tainted evidence to produce their initial, now totally discredited, report ‒ may as well close their doors for all the credibility they will have left.

Bear in mind also, Thomson is appealing against his verdict.

No matter what happens, it will be interesting to see how events pan out. After all, it is clear that Jackson may have succeeded in making a mockery of the Royal Commission by avoiding cross-examination ‒ so far, at least ‒ on the bulk of allegations against her, but she is running out of excuses and chances in the Federal Court.

And Kathy Jackson may soon need to start packing for her next long vacation at the public’s expense.