Is China educating an elite class of students with the plan of seeding them into positions of power in Western democracies? Craig Hill – once a teacher at a Chinese school – alleges this is the case.

IN HIS BOOK Silent Invasion, Professor Clive Hamilton talks about a meeting in 2004 where Chinese Communist Party Secretary Hu Jintao instructed envoys from around the world that Australia was to be brought under China’s sphere of influence — politically, culturally and in every way.

The plan is apparently to put agents of influence into Australia’s major political parties and business organisations so they will support China’s position on global affairs, and submit to whatever Beijing wants.

Hamilton states that this is to test Beijing’s methods, with a view to placing such agents in other western countries in the future, to gain control there as well.

My own experiences in China support this view, with a large Chinese corporation with links to the Communist Party apparently having plans to place gifted Chinese students in positions to assume roles as leaders of western countries and international corporations.

The school describes its Ruling Program as a type of international cultural exchange program with leading schools in the United States and Britain, based on a fictitious United Nations Program model of education.

However, the clue to the real purpose of the program is in its name — the Ruling Program. It is also called The Ruling Class. 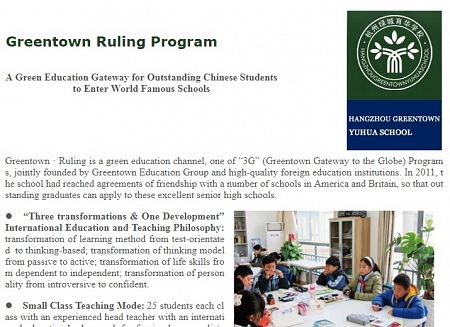 I was teaching Science, Maths and Drama in this program in 2011-12, and had discussions with the school’s Deputy Principal, Topren Sun.

Mr Sun informed me that the Year Nine students I was teaching had been handpicked from across China by government talent scouts for their high level English and advanced academic skills. They were considered the most elite high school students in China, who had parents rich enough to enrol them at the school. The parents were first generation millionaires, all of whom seemed to have links to the Chinese Communist Party. This is usually the only way to get rich in China, according to Hamilton’s book.

In a meeting with the school board about the students’ progress, Mr Sun accidentally let slip that the students were expected to be suitable to be elected as leaders of democratic countries and asked which students would be able to achieve this.

Believing it to be an unachievable pipe dream of a Chinese billionaire with delusions of world domination, I played along, stating that I would do assessments on all the students and file a report within a month. I had no intention of doing such an assessment and believed that they would forget about it within a month.

My contract was terminated a month later when I failed to submit the report.

After having read Professor Hamilton’s book, I beieve it is likely the program is not a pipe dream and that the billionaire owner of Greentown, Song Weiping, is probably an agent of the Communist Party. If what the school told me is true, it would appear that China is already training students, brainwashed into loyalty to the party, to become leaders of western democracies.

In particular, Topren told me of one student, Emily, who had been born in America to rich Chinese patriot parents running a business in the USA, possibly as a front for Chinese government operations. She spent the first seven years of her life in America. Topren stated that once she had finished her education in China, she would only need to spend another seven years in America before she was eligible to be United States president.

After having read Silent Invasion, the plans take on a more sinister perspective.

According to the book, after China slaughtered 10,000 unarmed students in Tiananmen Square in 1989, they began a “patriotic education” campaign in all the schools in China, commencing at primary school. The education campaign aimed at changing the narrative that gives the Communist Party legitimacy to rule. The principles of class struggle and how the Communist Party had overthrown feudal overlords was no longer working — Chinese people wanted the benefits that money would bring them, along with democracy.

The new narrative was to brainwash the society into believing in the so-called “Century of Humiliation”, whereby China had been subjected to 100 years of subjugation by Western powers and Japan. This narrative taught the Chinese people that they needed to seek revenge against these foreign powers, who had supposedly humiliated China.

We therefore have the situation where, if what the school has said is correct, they are planning to put Chinese patriots, hell bent on revenge against the West, into positions of power in the countries they are seeking revenge against. Bear in mind also that the Ruling Program at Greentown now involves thousands of students — only a handful need to succeed to fulfill the school’s ambitions.

It is also highly possible that similar programs are running at other schools across China.

Professor Hamilton’s book has been flippantly dismissed as nonsense by those he named as agents of influence for China, but none of them have produced any proof that what he has said is untrue. The proof that Professor Hamilton has provided, however, is quite overwhelming, and other western countries have now begun to follow Australia’s lead in resisting Chinese subversion of our political and social systems.

The claims are hard to refute and all Australians should read the book before dismissing them out of hand.

We have a lifestyle that is the envy of the world, but a hostile foreign government appears to want to take away the freedoms that we enjoy.

We need to become more aware of that and act to stop it.

Silent Invasion, by Professor Clive Hamilton, is available from the ABC Store (RRP $34.99).

12 March 2017, 8:00am Brisbane City Council has tarnished its reputation with its attacks on the Adele ...

14 February 2017, 6:30am Donald Trump needs to stop playing on Twitter and act like a leader of the free ...
Join the conversation
comments powered by Disqus
News updates