In defence of the Melbourne Cup

SOME PROGRESSIVE and left-wing people have been bagging out the Melbourne Cup.

Some of this is elitist nonsense, the usual "bogans are bad" bullshit.

So called "bogans" are working class people. Their response to capitalism is to enjoy themselves in whatever way they can, including getting pissed and being noisy. Some might even "bonk" in "inappropriate" places.

Melbourne Cup Day is one of those days where the Australian working class outside Melbourne lets its hair down for the afternoon. In Melbourne, the whole day is a public holiday.

Historically, the ruling class has cracked down ideologically – and sometimes physically – on working class drunkenness and lewdness, because those "sins" interfere with production and hence profits. No doubt, across the front pages of the press on Wednesday, there will be picture after picture showing the "debauchery" at the Cup. This tut tutting has a purpose. Get back to work. Take lower pay. Work longer unpaid hours. Make profit for us.

For workers, however, days like Melbourne Cup Day are a time for less – or no – work and for dressing up, catching up with friends around a TV, maybe having a flutter on the race or going in a sweep. For some, it is also about getting pissed.

It is their way of escaping for a few hours from the alienation that is capitalism. Certainly, it is an alienated way of escaping alienation, but short of a democratic, socialist revolution there is no solution to systemic alienation. The exploitation of workers (through the bosses expropriating unpaid labour in a normal working day) is at the heart of capitalism and that exploitation creates both profits and alienation. 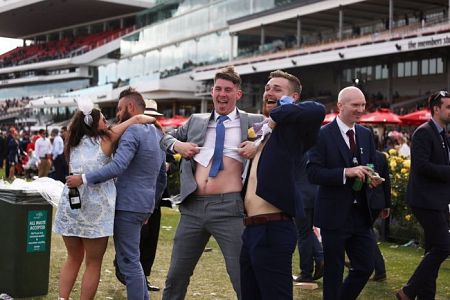 Gambling is an important part of the day. This is the nonsensical idea that by putting a small stake on a horse, or a greyhound, or football teams, or politicians, or whatever the gambling industry is pushing, will provide enough to escape from the necessity to sell our labour power to survive.

Gambling itself is a warped reflection of capitalism. With some variations on how it is done, a bookie or a betting agency takes  a slice of the money wagered for themselves and redistributes what is left to the "winners". That means the winners, overall, are the bookies and betting agencies, not the mug punters.

Some critics complain about the cruelty that is horseracing. That is true. Like greyhound racing, most horses do not survive for long. Many of the slow ones are sold to a knackery. The fast ones are whipped and often end up with ailments like blood in their lungs — a common problem. When they finish racing, many end up as dog food.

The problem is that those who complain about this cruelty do so generally without offering any alternative for those employed in the industry, or for the working class which enjoys horse racing. Least of all does looking down our noses and sneering at the Melbourne Cup bogans help us win them to the side of human liberation, and through that, to the liberation of animals. In fact, it exposes an elitism that is not revolutionary but dismissive of workers and their ability as a class to change the world.

One of the joys of Melbourne Cup is the sense of community, of togetherness, of conviviality. We meet in pubs and clubs, and workplaces across Australia, to natter and chatter about inconsequential horse racing things and to whinge about work. We are together.

Raise a glass to the Melbourne Cup. Let’s work together to help create a society where every day is a holiday and a celebration, free from exploitation and alienation.

I backed the quinella using my tried and true form guide: connections to France no matter how obscure and anything even vaguely leftish. That is analysis for you. And I drank cups of tea during the day, having in a previous life been a daily victim of temporarily escaping alienation.

Sections of the media are bashing #MelbourneCup racegoers.

Open your eyes. Subscribe to IA for just $5 a month.