In Chains: An abuser brands themselves as a rescuer

A registered pet enterprise which promotes itself as a rescue organisation and collects public donations, is discovered abusing dogs. Peter Wicks reports.

A LONG TIME AGO I had a mate at work that we all called Curly, I can't even remember his real name.

We called him Curly, not because had had curly hair, but because he had none — in fact he was a skinhead.

It is the same logic we use when we call someone Shorty when they are clearly so tall they duck when going through doorways.

I wonder if this is the same logic that Simone Dines of pet enterprise “Off The Chain Rescue” used.

A few weeks ago, in a little place called Blind Bight near Cranbourne in Victoria, residents bunkered down in fear as a man let loose with a shotgun. The man was screaming abuse at neighbours and firing at their houses with a shotgun — one woman with a young child was reportedly deeply traumatised.

In the end, helicopters were called in, streets were cordoned off, residents were advised to stay indoors and eventually the man was arrested. How nobody was injured or even killed was nothing short of a miracle.

The man, whose name is Troy Scoble, was arrested on site and released later after reportedly cooperating with police, although investigations are continuing. Why he was released back into the community so soon after going mad with firearms in a community is rather bewildering.

So what was the cause of this madness?

Scoble had a few dogs on the property he lived on with his parents — well quite a few in fact. He has had issues with several councils over the years regarding his tendency to procure and hold large numbers of unregistered dogs. These dogs were all dogs of breeds used for hunting: Staffie crosses, American Bulldogs and Staghounds. It is unclear how many of these dogs were his as many were unregistered and had no micro-chips but there were approximately 40 dogs on the property.

These dogs were held next to the house and some in a clearing in bushland several hundred metres from the house. 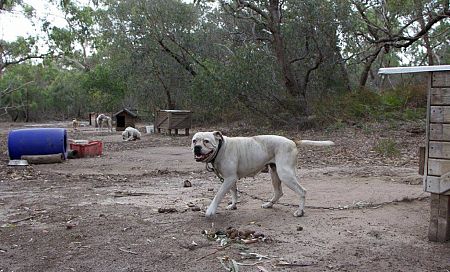 On 15 May, the property was raided by the RSPCA, police and council officers. When first questioned by the RSPCA, the man denied knowledge of the dogs in the bushland, despite being shown photographs of several dogs. However, after the raid, his memory appeared to have been jolted. This sudden jolt came about after authorities had left the house and he realised that someone had been taking photographs of the dogs under his care. Blaming the neighbours, out came the shotgun and the aforementioned siege ensued.

However, unfortunately for Scoble, it was not his neighbours that had been providing RSPCA with photographs, it was animal advocates organisation, Oscars Law.

Acting on a tip off, Oscars Law activists investigated a report of dogs that were chained up in bushland. What they found left them stunned. 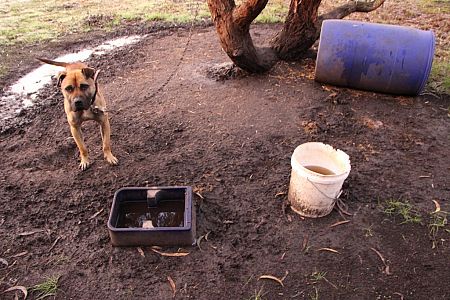 Footage from hidden cameras Oscars Law activists installed, show the dogs are fed once a day by Scoble who rocks up with food and dumps it in front of them. He does not pat them or show them any affection at all in the short time it takes to give them food. It is unclear how often their water is changed but given the distance from a tap and given that it would be difficult to transport water to the location, I assume that it is not often. The size of the water buckets and the putrid colour of the water in them, indicate that a change of water is a rarity.

To illustrate Scoble's disregard and contempt for both the law and the dogs, even after he had been raided by the authorities for his mistreatment and neglect of these dogs, the below picture shows the condition of the drinking water of the dogs when Oscars Law activists went to check on them over the weekend.

Troy Scoble, however, is not just an animal-abuser, he is the on-again, off-again partner of Simone Dines. 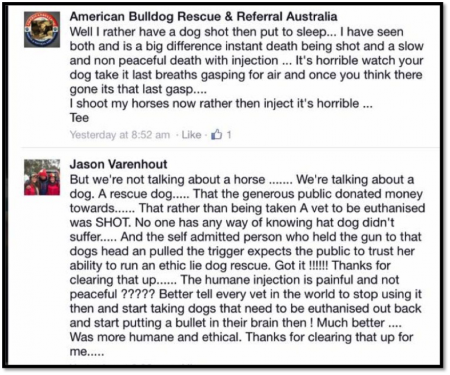 Now Dines runs the rescue group "Off The Chain Rescue – Bull Breeds", while the dogs she claims to have rescued previously, remain on chains 24 hours a day. Dines also labels herself as a dog trainer, although her label and high hopes don't count as qualifications which are something she appears to lack.

Dines even has a donation tab on her unregistered, “Off The Chain Rescue” Facebook page, where you can donate funds via PayPal into her own personal bank account. These donated funds, Dines claims, go towards looking after the dogs and, who knows, may have even paid for the chains her partner keeps the dogs permanently chained with.

Dines is also a registered breeder with Dogs Victoria, something which is surely another proud feather in the cap of the industry body which appears to be boosting its membership with puppy factories. Dines runs Simmicor Kennels and I wonder if donations to “Off The Chain Rescue” help her out to run that business, when not funding chains for Scoble. She also runs another breeding business called Rain Storm Cane Corso's.

Dines was notified by Oscar's Law about her dogs being chained up in the bush weeks ago and several attempts have been made by Oscar's Law, the RSPCA and other rescue groups, to organise for the surrender of these dogs. However, Dines has refused to cooperate.

I contacted Dines to hear her side of the story and was greeted with threats of legal action and abuse. Dines spoke furiously of how nobody had offered to help poor Scoble with the dogs.

When I suggested that perhaps the way to seek assistance from neighbours was not to shoot at their houses with a shotgun, her response was,

Not once did she display any concern or sympathy for the dogs during our discussion. In fact, it is safe to say she was wearing her “Troy Scoble rescue hat" rather than any dog rescue hat when I spoke with her.

Dines once offered this sound advice to her followers on Facebook:

Troy Scoble has been charged by Casey Shire Council with numerous offences and, I understand, police investigations into his shotgun rampage are ongoing.

Meanwhile, Simone Dines continues to take donations on her woefully misnamed “Off The Chain Rescue” Facebook page. Dines also continues to run her Simmicor Kennels breeding business, and she also goes to KCC Park at the State Dog Centre to act as a steward for Dogs Victoria.

I hope that the Tax Department and Consumer Affairs look into the public donations being made to an unregistered rescue group with a personal bank account. I hope that Bass Coast Council take a closer look at the conditions dogs on Dine’s property are living in. I hope that police and Casey Council leave no stone unturned when investigating and prosecuting Troy Scoble.

Dine's Facebook page (before she closed it down) had references to her receiving Centrelink payments. I hope that someone takes a look at any welfare she receives since it appears she runs two breeding businesses, accepts donations and also earns money as a trainer.

Not only that, I hope Dogs Victoria come to their senses and deregister Dines as a breeder. I would implore them also not to allow her to steward on their behalf, or have any connection to Dogs Victoria or the Kennel Club, whatsoever.

Most importantly, given Dines and Scoble refuse to do the right thing and have so far failed to comply with directives such as clean water supply, I hope the RSPCA can seize these dogs which are at present still chained up in the bush. This would be a good start.

You can sign the petition to Dogs Victoria to deregister irresponsible breeders here.

Thanks to all those signing & sharing the petition on behalf of the abused & chained dogs of Bilnd Bight https://t.co/69Of91PsHn #auspol

The fight to save the dogs chained at Blind Bight continues. Thank you to Wixxyleaks and Ben Wild - AJP Candidate... https://t.co/5mJlPWgulR