IT'S 8.30am on a hot December morning and I’m weaving through groups of people camped outside our office. When I open the doors they pour in, a wave of broken, disenfranchised humanity. Welcome to Housing NSW.

I work in Access and Demand, a sub-department of Housing NSW that assists the homeless with temporary accommodation. The office is always busy but at Christmas time families fight, plans break down, relationships falter and money runs out. Those that find themselves on the street discover all government departments (except Housing) are closed. We’re inundated with victims of crime, and people kicked out of home or overcome by silly season excesses.

Most people visiting Housing are in dire need. There are few low-income options for long-term homeless in the Northern Rivers, because caravan parks charge in excess of $300 per week for long-term rentals off-season and over $1000 in peak. The flip-side is the "repeat offenders" — a small percentage who complain about wasted taxpayer dollars although they have never paid a dollar of tax. These street lawyers know every loophole in the system and want their share. They don’t realise they are playing the odds to win against a system that already has their number.

I call the first ticket. A single, healthy male, who under government guidelines is not at risk on the street, sits down. I cannot help, but he still wants somebody to acknowledge that he is human and hurting. I listen to his tale of betrayal, mugging and a sleepless night in emergency. When he finishes, I offer the few suggestions I can make and he thanks me for listening. 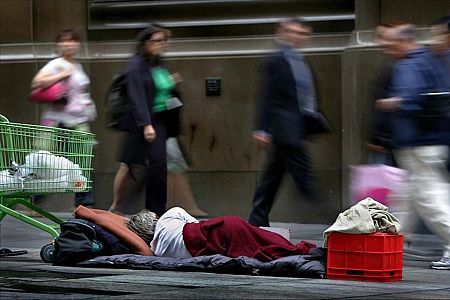 People pass by homeless person sleeping on the street. (Image via janbarham.org.au)

Some people are not as understanding due to drugs or untreated mental illness. They hurl abuse, or scratch, fidget and cry. Some slam their heads on the desk with slow precision when bureaucracy overwhelms them. Nevertheless, they all offer me the only thing they have — their terrible, heartbreaking, often futile, stories and I give them the only thing I can give unconditionally — my attention.

This region is popular because of its beauty, but scratch the surface of Lismore, Ballina and Byron Bay and high unemployment and unaffordable rents mean most low-income earners have few aspirations. As the homeless increase, the councils’ restrictive rulings on new builds keeps affordable housing understocked.

The situation is a windfall for unscrupulous landlords. Many fringe-dwellers sleep in cars, or pay exorbitant rent for private garages, sheds and caravans. The long-term homeless sleep under bridges and in parks, and wait for public toilets to open in the mornings. Nothing is done by the council to help the shifting population of rough sleepers and scant support is given to support organisations. It seems strange that a country city the size of Lismore doesn’t have a homeless shelter. It's almost criminal, too, that the council used approximately half a million dollars to install a "boat statue" on Woodlark Street while people sleep rough. The homeless joke that the dry-docked boat offers shelter from the rain but the message it sends is clear — and that’s no joke.

The longer I stay, the clearer it becomes that the people we assist are fleeing disadvantage in the knowledge that their flight path is narrow. Every tale of descent onto the streets batters another hole in my belief in an egalitarian Australia. Yes, some are embellished, but if half of what is said is true, the nation should wake up but I cannot imagine what would shake the middle classes out of their slumber, let alone make them feel responsible for the less privileged struggling beneath their full bellies.

Fortunately, Housing NSW offers temporary accommodation to people who are homeless through no fault of their own, women and children escaping domestic violence and recently released prisoners. Of course, not everyone is eligible, but it’s hard to describe my satisfaction when I help someone into long-term accommodation. Some come back to thank us and that’s an unexpected bonus. Others though, our "repeat offenders", are thorns in the side.

One for you @Bec_Scott "Inside Australia’s growing #homeless crisis" https://t.co/pujGEJMzKX Last paragraph nails it

Our repeaters bully. They cause commotion. They insist that someone listen. One of my quieter days is shattered when one arrives and demands help. I explain that she was recently helped. She leaves in a huff and returns two hours later, armed with crocodile tears and a social worker. The pair run interference, unravelling guidelines until she finds a loop and jumps through, hanging on with the tenacity of a bull-terrier. I tell her she needs bank statements, identification and a Centrelink statement to be assessed.

"Do you know how much it’ll cost me for a statement?", she asks.

I know I’m wrong, but I stare her down. That first act of callousness breaks something inside. Later, I speak to my team leader and she agrees I shouldn’t have snapped, but says it called "leakage", a side-effect of working with disadvantaged people. Hers is a steady hand on a ship sinking under the pedantic emphasis on key performance indicators. Everyone wonders at policies that make no allowances for the human in human services — but she keeps us going.

I talk about Housing to everyone I know. Not because I love it — I want to open their eyes. Some listen with hungry schadenfreude; others claim to have never seen a homeless person in the area.

One day, I meet a woman who has spent ten years on the street. I’m fascinated and appalled. She tells me she stays with a "safe group" at night. The long-term homeless have their own networks, methods of survival, private language and micro-culture.  Some live hand to mouth and abuse alcohol or drugs to numb their existence, but most wait for the holy grail of homelessness: a housing property

Securing a housing property means subsidised rent and guaranteed tenancy, as long as rent is paid and rules are obeyed. The challenge is waiting ten years plus for a government property. Many local, long-term homeless have waited over ten years already.

Around August, I notice a change. I talk in even tones and lower my voice if clients become irate. I refuse to be drawn into aggressive exchanges with people suffering more than their fair share of life’s hard knocks. Consequently, I’m rarely abused and often thanked, whether I offer support or not. The months have taught me an important life lesson about reconciling differences without resorting to confrontation or retreat.

November arrives and I’ve been at Housing for a year. The tide of homeless waxes with a day of five crying women, a young man lost in the system and an elderly gentleman who has no idea he is homeless.

Another ticket is called and an anxious man sits down. His car has broken down and he wants to continue sleeping in his own "home". I explain that we cannot help because we don’t fund vehicle repairs. He starts crying. I tell him he may be eligible for temporary accommodation, but he doesn’t want handouts. He wants a loan to fix his car. His distress is palpable. I know my days at Housing are coming to a close.

The year at Housing changed me. I’m damaged, but a better person for the experience. A shield has been lifted and the shameful secret on the streets of Australia revealed. I see homeless people.

For the facts on the homeless in Australia as well as by state, see Homelessness Australia here.

Turnbull's hypocrisy sinks to new low as he instructs Australians to "hug" the homeless while continuing to... https://t.co/MEuFf7HYYk

Australia must rescue #Rhohingya Don’t feed homeless, poor or refugees — it only encourages them https://t.co/r987a5c3AP @IndependentAus

Stand with human rights. Subscribe to IA for just $5.