SUBSCRIBE   DONATE LOGIN SHOP
SUBSCRIBE   DONATE
Wanted for Robodebt crimes: Morrison, Tudge, Robert and Co
The Commonwealth Bank's illusion of ethics
Why privatisation of the NBN would be a good thing
Get a Mark David T-shirt!
An elegy to masks and why mine stays on
Health

Since the tragic death of Robin Williams, fellow sufferer, Alex Garner, asks why it took the death of a hero for people to finally start talking about depression.

INDEED, there are countless misconceptions, intolerances and stigmas implicating the discussion about depression. But why? Why is our society so hesitant to move forward on an issue that is imminent in so many people’s lives.

While the topic has been raised a great deal more since the tragic death of Robin Williams, I can’t help but wonder why it took the death of a hero for people to finally start talking about depression.

This morning I watched an interesting video, in which American comedian, Kevin Breel, reflected on his own depression. Breel, exclaimed

“…if you break your arm, everyone runs over to sign your cast…If you suffer from depression, everyone runs the other way…we are so accepting of any body part breaking down…except for our brains”.

Well guess what? Suicide is the biggest killer of young Australians and accounts for the deaths of more young people than car accidents according to Beyond Blue.

But if we can’t come to terms with or speak about depression as openly as we do about safe driving, how is this devastating situation ever going to be resolved? 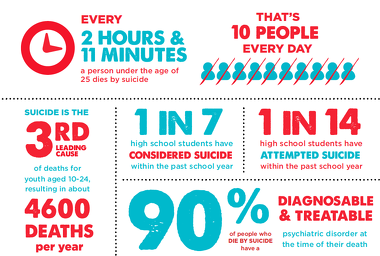 The only point I can fault Breel on is his emphasis on the phrase:

“I suffer from depression”.

While I salute him for having the courage to openly speak about his experiences, it is through this very sentence that he has unknowingly stigmatised himself. If you had the flu, you wouldn’t say “I suffer from the flu”.

Which brings me to one of the biggest misunderstandings of depression — the assumption that depression is the condition of being exceptionally sad about something/things going wrong in one’s life. In the eyes of many, my life is just about perfect.

I live in a beautiful home with a very loving and supportive family.

I have a group of amazing friends who I could count on for anything.

I went to a prestigious private school where I generally achieved good results.

I do not have any life threatening diseases.

But I still have depression.

My depression came about with no warning some time during 2009. For no particular reason, I started to feel alone, insecure and dissatisfied with anything and everything that was going on in my life.

In 2010, I lost over ten kilograms, because even eating (now one of my favourite things to do) was too much of an effort. Fortunately, it didn’t take long for my parents to realise that something wasn’t right and to quickly whisked me off to a doctor. At first and for a long time I was ashamed of my depression. How selfish was I to feel so low and dejected, when I was so fortunate compared to so many other people?

I specifically remember one acquaintance saying to me,

“You’ve got nothing to be upset about, so harden the fuck up”.

He was right. I didn’t and I don’t have any reason to justify my low feelings.

But I still have depression.

Even today, what happens in the brain to cause depression is not fully understood. Evidence suggests it may be related to changes in the levels or activity of certain chemicals, particularly serotonin, norepinephrine and dopamine which are the three main chemicals related to mood and motivation that carry messages within the brain.

Sooo, basically we can assume that depression is brought on by an imbalance of chemicals in the brain, right?

Did you know Parkinson’s disease is caused by an imbalance of chemicals in the brain?

And did you know, diabetes is caused by an imbalance of chemicals in the blood?

So what’s the big deal? Why is everyone so afraid to talk about just another biologically-caused disease?

My final year at school was probably the hardest year of my life. Tasks that I used to be able to do in my sleep became almost impossible for me. I couldn’t concentrate. I was forever forgetting things. I was distant. I was constantly exhausted and would spend more time in bed than not. One evening,

I was attempting to prepare for an English task the following day. Initially, I was frustrated with myself for not even being able to produce a sentence. This soon turned into a complete meltdown. That night, I stood on the side of Beecroft Road wondering if I would feel the impact of a car slamming into my body. Would it hurt? What would people think? The idea of falling into a permanent sleep, while terrifying now, thrilled me in that moment.

This wouldn’t be the last time I thought about killing myself, but it was the most memorable. Somehow, I managed to pull myself from that particular dark moment and when I returned home, Mum and Dad decided it would be best I didn’t go to school for the task.

The next day, I felt disgusted with myself. it felt like a self-pitying, cop out. When my friends messaged me to ask where I was, I felt sick with guilt and ashamed of what they might think of me. Why should I be able to get an extension on the task? Everyone else was under just as much, if not more, pressure than I was.

I, myself, despite having depression, was guilty of succumbing to the misconstructions surrounding the illness.

I want more than anything to tell you that my story has a happy ending, and it does but my idea of a happy ending is probably far from yours.

Despite coming off my anti-depressants during 2012, I am currently back on them and will probably be on and off them for the rest of my life.

Shortly after I started taking anti-depressants again, a boy in my year took his life. A week after that, the news of Robin’s death exploded on the news. Suddenly, depression was being talked about everywhere. People were confused, angry and sad, but at least people were talking.

Every 30 seconds, the loss of a person who killed themselves shatters the lives of family and friends.

For every person who completes a suicide, 20 or more may attempt suicide.

It has taken me a long time to come to terms with my illness, but if I can, you definitely can. The purpose of this post is to make sure the conversation about depression doesn’t fade away again. It shouldn’t have to take the death of another inspirational figure, or another friend, to remind us of the necessity to keep this conversation alive.

Depression is an inevitable part of our society, so let’s start dealing with it.

20 December 2014, 7:30am Since the tragic death of Robin Williams, fellow sufferer, Alex Garner, asks why it ...
Join the conversation
comments powered by Disqus
News updates