SUBSCRIBE   DONATE LOGIN SHOP
SUBSCRIBE   DONATE
How we prevented a Morrison dictatorship
How Howard screwed the Libs
U.S. site tries to ruin what makes fairy bread great
Bloody Idiot of the Week — Episode 28: Get used to it
Morrison's 'politics of retribution'
Victoria

By Peter Wicks | 2 January 2013, 10:35am | comments |
Over this holiday period, spare a thought for dogs being bred in despicable conditions in Australian puppy factories. Peter Wicks reports. 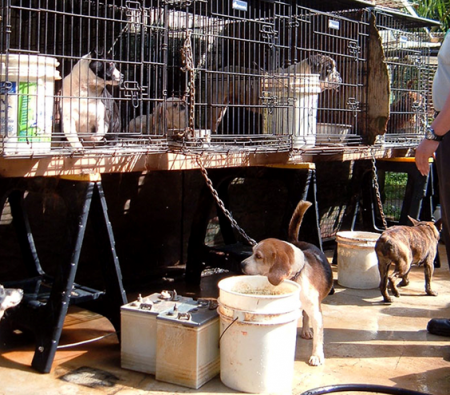 ONE OF MY favourite bands, The Eels has a song called Dogs Life. Here are some of the lyrics:

It is clear that when E wrote a song envious of the life of a dog, he had not come across some of the pooches in the sorry places I am about to talk about.

We have all walked past the pet shop windows and seen the puppies in their square glass jars playing around or sleeping. They are cute, and they make you want to go in and take them home, but what you may not know is where they have come from. 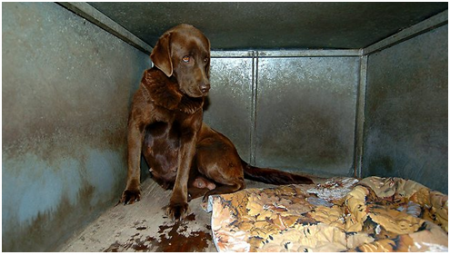 Factory dog living in a hot, filthy iron cage, with not enough room to even stand up.

We have all heard about the demise of the manufacturing industry as our dollar strengthens; we have all seen the factories closing as production lines are replaced by outsourcing in China; but there are some factories that continue to flourish. They are called puppy factories, and they are ugly places in every aspect.

These factories don’t make stuffed toy puppies; these factories are places where dogs are kept in the most appalling of conditions and bred so that you can be tempted by puppies as you walk through your local Westfield.

You have probably heard the line “a dog is not just for Xmas” — and it is true. Many dogs are dumped after Xmas, or are given away “free to a good home”.

A good home can be a huge variety of things — but what it isn’t is what many of these dogs endure. Tied by chains that are hardly as long as your arm; shoved in cages hardly tall enough for some of the dogs to stand up in; bed for a dog in these cages is just a puddle of urine or a pile of its own excrement. Food is whatever gets thrown in, usually some mould encrusted crap which will only cause the former pet to become sick, and end up with gastric problems to add to the filth on the floor and make it lose weight faster than an anorexic junkie with bulimia issues.
We treat our rapists, murderers, and paedophiles better than we allow these dogs to be treated. I guess if the dog is a “man's best friend”, than rapists, murderers, and paedophiles must be considered family judging from their treatment. The conditions these dogs often suffer are a kind of concentration camp for animals.

Many dogs, even after being saved from these farms, suffer emotional trauma. Many of them continually walk in small circles, for example, because this is all they have ever known. That is as far as they could explore on a short chain, or in a tiny cage.

Below are a couple of videos that you may find interesting, as well as shocking, appalling, and disgusting. They may also make you angry; in fact, if they don’t, I would suggest slapping yourself in the face a few times and then watching them again.

The first segment is from the Victorian edition of ABC 7.30 from last year:

What I find alarming in this video is the attitude of the relevant Victorian Government minister, Peter Walsh. Walsh said that the dogs in the video are probably trembling due to being scared of the lights and the camera. It would not have anything to do with possible beatings, being scared of being chained up, fever, starvation, maybe they haven’t seen light for months... no, it must be the camera crew.

The next video is taken in 2011 at the property of an online supplier of pets named Ann Giles. Justice moves at a snail's pace in Victoria, it seems — despite over 30 charges of animal cruelty, it was only around a week ago she was ordered in court to sell off all her puppies. She is, however, still allowed to keep seven dogs...

This is not the first time she has been in trouble either; in 2010, she was banned from owning horses (she apparently still has three) and was ordered to remove all dogs from her property, except five. Now with extra video evidence and over 30 new charges, it would seem she is now being allowed to keep two extra dogs. That's putting the Victorian back into Victoria's judicial logic.

So, you may well be wondering what to do about all of this? Well, there are a few things possible...

Don’t buy a pet you only want for a week. Seems obvious, I know, but so many people still forget that a pet is for life.

If you buy a pet, avoid pet stores, try to find a registered breeder. If you are not sure what breed of dog you want, I would suggest going to the local RSPCA to find a pet — they will have many different dogs to choose from, all in need of a good home. 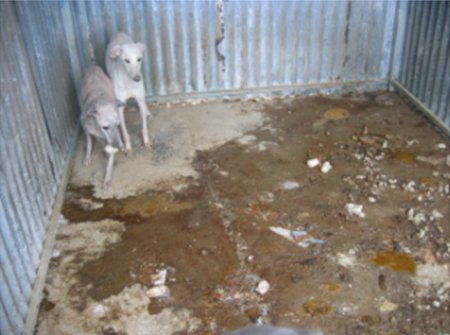 You can support organisations like Oscar's Law and the RSPCA in their fights the stop the so-called “puppy factories” and their attempts to strengthen laws and see them enforced far more effectively than they are currently. Links to their Facebook pages are embedded in the above text.

The Oscar's Law website has a list of things that you can do to assist — simple things like signing petitions, and sending letters to politicians, and so on.

Below is a link to a leaflet for Oscar's Law, that you can send around to your mates:

Remember, activities such as those described above and shown in those videos will continue unless the public react. The public has a history of not reacting to that which they know nothing of, which is why it is vitally important that anybody who cares about issues spreads the word.

Anyway, now you know — it’s in your hands.