The methods we are using to deal with troubled children is turning them into hardened criminals, writes Duncan Storrar.

The Cain Government of Victoria of the 1980s was very progressive. As such, it spent a lot of money moving from a 19th Century British approach to children in peril towards a more humane “Scandinavian” approach.

As a child in the system at that time, improvements were beginning to show. Then, in 1992. we got Jeff Kennett.

During Kennett's time, there was, in real terms, a reduction in the childcare and youth justice budget. Moreover, what money was spent was put into tougher crime measures. Governments on both sides of the fence worked out that “tough on crime” got votes and so it’s been a race to the bottom ever since. We have Americanised our prison system and youth justice system.

So, fast forward to to last Victorian State election: one of the main election issues was crime and, in particular, youth crime. The Murdoch press and Neil Mitchell expounded upon everything to do with youth crime they could find. Labor fought hardball and matched the rhetoric, blow by blow, until their youth crime and the feeder to Parkville out of home care became hell for the children in these places.

Out of home care (which is a subject for another article) is full of all forms of abuse and the children are just seen as commodities by the people that are sub-contracted by our government to look after them — our most endangered citizens.

The usual suspects in our print and talk back media give us the typical gang scare, which looks like professional thieves in a smash and rob at a jewellery store.

The press relentlessly show a caricature of smart enterprising youth that have probably been in contact with the courts and should have already been in programs that we know might work.

Those that are not in that category fit the downward spiral proffered by both parties when they are in government — to lock them up and treat them like shit, which only leads to more crime and cutting of budgets. The media shows how easy it is to rob a high-end jewellery store. So, next thing we know, jewellery shops are getting raided every day. What did they think was going to happen?

All this led to new laws being passed in both Federal and State parliaments. These laws allow children to be treated as though they are in an American federal prison. Now, staff at youth justice centres think they have carte blanche to abuse young people.

What do you think happened. We had a riots at both Parkville and Marmsbury within the space of week. This should have been a sign to the community that something is very wrong in the system. Instead, the Government used these events as an opportunity to invest money in a new super max facility for children.

The Murdoch and Fairfax press used this opportunity to terrify the community.

Youth crime on the rise in most parts of Melbourne https://t.co/NqhBEEJmlw pic.twitter.com/9FGEiozcJi

The Government should have come and told the public what they knew, but they chose not to.

The methods that we are using to deal with troubled children is forcing some of those children to become hardened criminals and a lot more children are psychologically damaged in the process — permanently. This is costing the community billions in the care these damaged children will need as we condemn them to a life in poverty. They have said we should treat these children like animals because they rioted, thereby embarrassing the Government. This avoided any public inquiry regarding what may have brought children in our care to act this way.

I live in the area code 3219; everybody here knows somebody that has been to gaol and everybody knows people who`s kids are involved with children’s services. Contact with these services is just another thing the poor has to suffer. Poor communities are dysfunctional, so that this war on troubled youth is just another attack on the poor —but again that's for another article. Living where I do made it easy to find out why we are having riots in our youth justice centers. I just asked people in my community.

And what they tell me is this: To quote one of my friends kids, “its fucking hell in there”. (He then lost the plot and went on ranting, on a tangent about hell and stuff.)

We have been keeping our kids on 23 hour lockdown. Not just one or two kids, but whole units. Violence, and mechanical and medical restraints are being used on our children.

There was a picture in the Brisbane Times the other day that explains what I mean under the heading: 'Aggressive dogs, handcuffs, face masks on kids: Censored detention facts revealed': 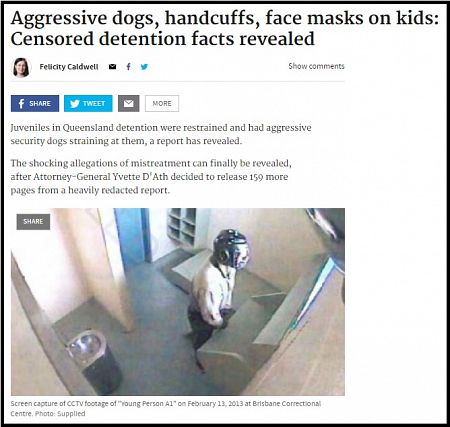 Why are we doing this to our children? When you take into account all the abuse in all forms that a child goes through, it can only be described as torture. I advise everybody reading this to go watch Dylan Voller`s testimony to the NT Royal Commission to get a feeling of what this treatment does.

I was saying to somebody recently:

“I don’t know what would be worse the sexual abuse without the restraints or 23 hour lock down,with the restraints [the kid on kid abuse is a given in this environment so we didn’t mention this] — the damage and end result is the same."

Now when these children are young adults we are just release them from this horrible world of violence, where the use of shackles and devices not seen since our horrible convict days. We are building Port Arthurs for our children — there is no other way to say it. These 18 to 21 year-olds now hate us and blame us that they have lost the capacity for empathy. All they know is violence and control.

They will come out with no prospect of work, they have no idea how the real world works and so gravitate to others like them. They form groups of friends they know from youth detention centres. Over time, they will fall into organised crime and turf wars will start. It's a cycle that been playing out for the last 120 years. In Victoria, the connection remains between children in government care and every wave of gangland violence — from the crime wars of the 1920s until the gang land wars of the nineties.

Victoria hasn’t had a Victor Pierce, or a Mr Rent-a-Kill, or a Dennis "Mr Death" Allen in recent years. These people were a product of what the State did to them while as children they were in its care or the care of the people the State sub-contracted to care for them as kids,

What we are doing now to our youth and children in State Care (no matter their crime, they are in our care) is something new. The treatment we give these children is akin to Guantanamo Bay. We can not turn the clock back. The dice has been rolled and we will have to, as a community, face the inevitable wave of violence and crime which, in turn, will start a new wave of hysteria, continuing the cycle of pain and misery for every child that goes through it. For every child that becomes a “Mr Rent-a-Kill”, there are 50 that will end up mentally scarred for life, never able to properly relate to society, thinking that the world hates them — and how can they not?

There are hundreds of reports on the shelves that say what does work in this field. Every government since Jeff Kennett is to blame for the gangland war we are about to have because they have created the circumstances for this to happen. They seem not to know any better, or do what they do just for votes, despite the billions of dollars that it will cost to fix this. These children are in our care and it is the community's problem — even if the community allows us to treat these children like animals, then it’s the government’s job to educate the community about why that is wrong, not to merely give the population the vengeance the newspaper has convinced them they want.

Dealing with poverty and treating children in care with love – and providing them with services – when they first come in contact with authority should be the first step. It’s time to stop these factories of pain and crime, and do what we know works.

The answers are in some of those reports that are rarely released. Government and parliament is meant to lead and change the world for the better, not the worse

Duncan Storrar is an advocate against poverty and has started an advocacy service for children in care and their families.