How much is that doggy in the window?

The price you pay for the dog in the window is easy to see, writes Peter Wicks from Wixxyleaks, however the heavy price it paid before it got there is much more difficult to calculate.

However, the pain and suffering it has endured to reach the glass box you first saw it in are not clear. And the conditions from which your puppy likely came and where it parents still reside (if they aren’t dumped in a shallow grave or ditch) are unknown.

For the pet shop industry body, PIAA (Pet Industry Association Of Australia), this is something they would rather people not ask about. From suffering to spin, from cruelty to cash, it’s all in a days work for PIAA.

PIAA promote the line that their members do not buy from “illegal” puppy farms, however time and time again we see that a council tick and business registration does not mean a business is necessarily moral. These puppy factories, whilst council approved, are often crime scenes in which the owners have often been found guilty of criminal acts of animal cruelty. While the premises may be technically legal, the puppy is often the product of criminal behavior — that being unimaginable animal cruelty. A bit like Ivan Milat owning a registered and legal vehicle and using it for illegal purposes.

This week, PIAA are in damage control after an investigation by Oscar’s Law uncovered the shocking story behind one puppy that had found its way into the glass cage of a Perth pet store.

The pup in question was torn away from its mother in an utter cesspit of filth in a far northern NSW puppy factory. From there, it was shipped via road and then spent approximately six hours in the cargo hold of a plane — all at the grand old age of around six weeks.

The shop in question proudly and prominently boasted that it was a PIAA member and therefore didn’t sell puppies from puppy farms, just as PIAA guarantees of all pet stores that are members of the association.

But that guarantee turned out to be made of the same substance as the smelly brown piles that litter the puppy factory cages the dog in question came from.

PIAA finds itself in an awkward position, being a body that represents pet stores selling puppies, while at the same time also representing puppy farmers. It relies on what is an outdated explanation of the term "puppy farm" to promote the intentional public deception that the two sides of the industry it represents do not have a business relationship with each other. That outdated interpretation is far from what the general pubic believe a puppy farm to be, as is clearly seen by PIAA’s reaction to this latest scandal of woeful neglect, disgraceful cruelty and industry buck passing.

After news of this latest scandal broke, acting PIAA chief executive Bob Croucher showed his loyalty towards his member in the Perth pet store claiming to Fairfax:

"This is obviously not what we are about. We have codes of practice which we ask all members to adhere to. But we are not an enforcement body. We can't take people to jail."

This statement from Mr Croucher is indicative of the level of trust the public can have in PIAA and anything to which it lends its endorsement.

Aside from the statement of the almost offensively obvious that it can’t take people to jail it clearly shows a couple of interesting facts about the industry body if the statement is to be believed.

What it clearly shows is that the industry body has a code of practice that is little more than a wish and a prayer. It is an ask of it’s members, not a requirement, and there is nothing to enforce the code even if by some miracle a breach of it came to the attention of the body. Given this admission from the Chief Executive it is a code that may as well be printed in invisible ink.

Mr Croucher followed up by saying:

“…this situation is very disappointing…”

I’m sure it is, Mr Croucher, exposure usually is.

However Mr Croucher's disappointment is something that should alarm anyone that has an association with PIAA or pays them a membership fee.

Mr Croucher's statement may as well have read:

“We will happily throw one of our members under the bus to save some face.”

PIAA followed up by putting a statement on its Facebook page after it was flooded with complaints and negative comments that were deleted as quickly as they appeared. 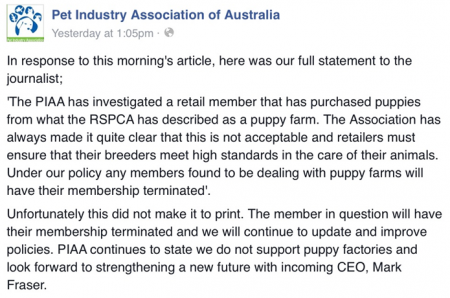 In making this statement, PIAA have made this pet store the industry scapegoat for the public's anger over puppy factories, something I’m sure the owners are overjoyed about.

It must be comforting for PIAA members to know that after years of paying membership fees and working with the body that, within 12 hours of a single piece of bad press, they will not only dump you like a bad habit, they will publicly announce their disappointment in you.

Clearly, loyalty is as cheap as an animals welfare in the eyes of PIAA.

If PIAA is as disappointed as they claim to be, one can assume that they will also disendorse any other pet store that also sells puppies from the same NSW puppy factory, as there is no doubt that this hideous factory supplies more than one customer.

I note that at the time of publication, the pet store in question still displays PIAA certification. 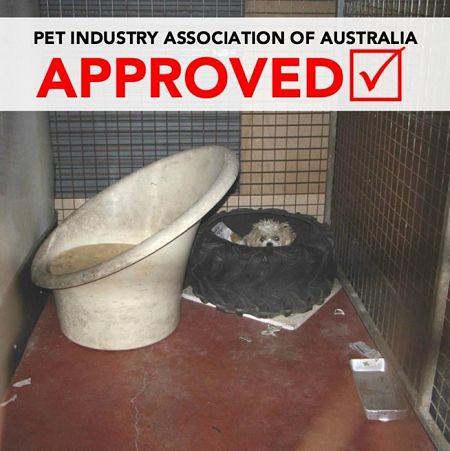 It is worth remembering that this scandal comes at a time when new legislation is being drafted in Victoria and a Parliamentary Inquiry into puppy factories is under way in NSW. PIAA is no doubt heavily involved in both of these processes and has submissions in place in NSW before the Inquiry.

We can only hope those in government who have the unfortunate role of dealing with this Association, that has proven itself to be more about deceptive practices and grossly misleading statements, are able to see through the rhetoric.

An Association that is so quick to hang a member out to dry represents nothing but itself.

If ever one needed evidence that industry self-regulation doesn’t work, just look at PIAA.