SUBSCRIBE   DONATE LOGIN SHOP
SUBSCRIBE   DONATE
ELECTION LIVESTREAM: Time for toast! Murdoch-free analysis
What to do if you spot conspiracists at the voting booth
Shop IA merchandise!
12 reasons why the Morrison Government should be ‘toast’
Independent Australia needs YOU!
Sport

How many horses must die before cruel and barbaric jumps racing is banned?

Racegoers and politicians bemoan jumps racing cruelty but why, then, is there no national ban? Peter Wicks reports.

A death that was for the sake of entertainment.

This Easter, in the United States, images were streamed live all over the world as millions watched in awe at the birth of a giraffe. The spectacle of a birth and the joy of a baby giraffe's first steps as its parents watched on proudly, was enough to pull in viewers from every corner of the globe.

In South Australia, however, we witnessed the despair of death and the horror of a horse's final agonising steps, with its front leg flapping about held on only by skin, as its executioner rushed out with a green tarp. This event and others like it didn’t have millions of viewers as most of the country – and indeed the world – have banned jumps racing due to its death and injury rate.

Below is footage of the final moments of Wheeler Fortune's life. The footage starts after the fall (it is one of two that fell that race) on the last hurdle — and a warning, it’s not pleasant viewing:

You can see Wheeler Fortune struggle to his feet in shock and then hobble around while his left front leg flops around limply below the knee. Obviously in pain and shock, he turns toward the crowd as if looking for assistance — you can see many in the crowd turn away in horror. In the background, you can see green tarp coming out. The racing industry says this kind of occurrence is not common, but the fact that they had a green tarp on the track within 16 seconds of the fall would suggest it is common enough to be extremely well prepared for.

' ... racing at Oakbank has never been safer with improvements in horse and jockey welfare.'

Yep, Wheeler Fortune would be happy knowing how safe things are at Oakbank, as would the other horse, Searaven, that fell on the same day.

“We’ve continuously taken what measures we can to make it as safe as we possibly can.”

Here’s a tip, Barney: take away the hurdles.

A spokesperson for Thoroughbred Racing SA claimed that they were concerned that if hurdles racing were banned in SA then the crowds may decrease.

While this may sound reasonable if you think that suffering should be a spectator sport, is it actually based on logic?

While I live in Victoria now, I am originally from NSW. In NSW, we looked south at the apparently progressive states with their jumps racing and blasting ducks out of the sky for a few months each year and wondered how they became known as the progressive states. I now realise it was, of course, self-imposed. 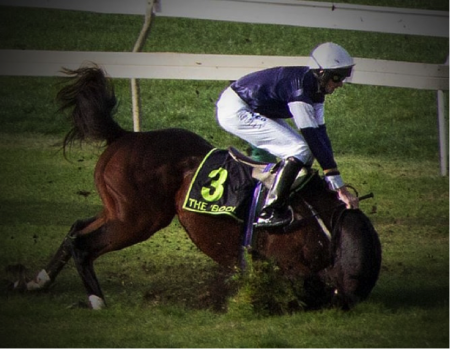 Safe as they possibly can. (Photo courtesy Coalition for the Protection of Racehorses.)

In NSW, where jumps racing has been banned since Fred Flinstone used to have a lazy wager, I would hardly say it has killed the industry. Far from it.

Up north, the non-progressive state where hurdles races are long gone is doing quite nicely. So nicely, in fact, the racing industry has set up its own organisation raising funds for the rehabilitation and rehoming of retiring racehorses — something advocates have been pushing for in progressive Victoria for years.

This year, in fact, NSW announced it was to host not just the country’s, but the world's richest horse race with prize money that dwarfs the Melbourne Cup.

Fair to say, I don’t think NSW rue the day they did the right thing and banned the barbaric jumps racing events for good.

This weekend, SA Minister for Racing Leon Bignell had a few words to say on jumps racing:

“It’s barbaric and it has no place in the 21st century.”

However, he also said banning jumps racing is "up to the racing industry".

I’m sorry, but is Minister Bignell somehow suggesting that we should elect the racing industry into government to make the rules? I’m not so sure that would work.

Actually, given the minister's strong words, I’d suggest that he should draft a bill and put it before Parliament. We have already been told by race organisers that it has been made “as safe as it possibly can be”, and we have still seen two horses down in a day, a hideous injury and one shocking death on the track. All while the kiddies watched on. A great family day out indeed.

Come and see #horses die would be a much more appropriate slogan after #Oakbank17.. #Horseracing = #animalcruelty RIP #Wheelerfortune https://t.co/sasKEBuWgM

I mean, what’s stopping the ban? Who gains from this carnage?

Is it the racing industry?

As long as this continues, the industry will always be surrounded by controversy.

Those people at the fence that turned their back in horror as Wheeler Fortune turned towards them with his leg hanging limply, I wonder if they’ll be back next year? The industry should be asking themselves this same question.

If the industry took out the hurdles races they would be replaced with other racing events, so it’s not like there would be any less for the punters to see; it may even attract more punters if they thought the events were more humane.

In fact, South Australia’s Advertiser ran a poll in their coverage of the tragedy asking the public if they thought jumps racing should be banned, 72 per cent who voted so far, think it should be.

Is it the bookies?

They don’t gain anything either. If anything, it would be better for the bookies if hurdles were banned because it would remove an element of uncertainty, thus making setting odds easier. No bookie cleaned up on Wheeler Fortune, he was out of contention and wasn’t going to finish in the first three at any rate.

The jockeys would have to be happy with a ban — even if they didn’t say so. Lying on a track with the hooves of 12 horses smashing into the soil around your head is not a position anyone would like to find themselves in. Being a jockey is risky enough without the addition of hurdles. 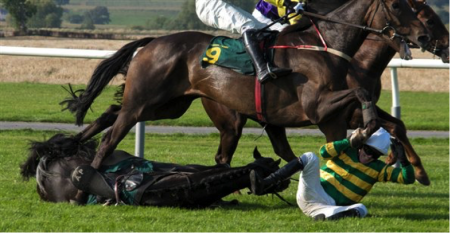 Geez, this looks fun and safe, where do I sign up? (Photo courtesy Coalition for the Protection of Racehorses.)

The public doesn't gain anything if NSW is anything to judge by. Nobody wants to see horses killed and injured, and nobody wants to see a jockey killed either. And make no mistake, that is only a matter of time. Perhaps when a jockey is severely injured or killed, their union or Safe Work Australia might actually be forced to act.

Jumps racing certainly doesn’t seem to benefit any of the major industry players; it only seems to have a detrimental impact on them.

Minister Bignell is right in a way, it would be a most welcome change if the many within the industry who oppose jumps racing would take a stand and start to back their own beliefs. I’d suggest the industry is being held back by the arrogance and stubbornness of a few “old guard” types who don’t want to be told what they can and can’t do, and their stance probably has very little to do with the actual races.

The industry in Victoria and South Australia are in dire need of some pioneers who want to bring racing culture into line with public expectations.

If the governments in these States truly want to be as progressive as they claim, they shouldn’t sit around waiting for the industry to wake up.

NSW is making a mockery of you.

Be aware. Subscribe to IA for just $5 a month.