Hold your fire President Widodo: What are you trying to hide?

This morning's explosive revelations about the bribes allegedly being requested by the Indonesian judges hearing the trials of Andrew Chan and Myuran Sukumaran is part of a wider web of corruption, writes contributing editor-at-large Tess Lawrence.

HOLD YOUR FIRE President Widodo, why are you murdering Andrew Chan and Myuran Sukumaran?

Your arrogant boast that you didn't even bother reading any of the legal briefs of those on death row who respectfully requested your clemency in good and legal faith is testimony to your contempt for the integrity, reputation and onerous responsibilities of presidential office.

It compounds the body of evidence that you are under increasing threat from the vicegrip of jihadists, who basically want Hindu-dominated Bali closed down, declared haram and Indonesia entire to revert to a paranoid Islamic state.

Not even two terrorist bombings, including one Australia could have averted, or the resultant woundings and the loss of hundreds of lives have failed to deter millions of Australians and others flocking to Bali.

It is no secret that you have either lost control or relinquished control of the thousands of Indonesians who have fled to join Da'ash (the Arabic word/acronym for Islamic State) in Syria, Iraq and elsewhere, to say nothing of the alliances and training camps that have already formed inside Indonesia, as well as the Philippines, Australia and the unattended islands in the Pacific.

You have reneged on your election promises to disinfect the rancid corruption and mandatory bribery system that still plagues the military, judiciary, police and the administrative and political systems, and which daily cause untold misery and needless pain for ordinary Indonesians who once had such great expectations of you.

And before you start your hoary rants about old colonial masters, et cetera, these opinions are also expressed by those of your own constituents who are brave enough to speak out and who have some measure of protection. Hopefully.

We are not free from any of this in Australia. Like so many of our politicians you promised so much but have delivered so little.

This morning's explosive revelations by Gold Walkley winner Mark Davis and Tom Allard confirms the abject corruption of the judicial system and what the legal teams are up against if they don't capitulate to it:

The former lawyer of Andrew Chan and Myuran Sukumaran has outlined explosive allegations of corruption by the judges that sentenced the Bali nine duo to death, saying they asked for more than $130,000 to give them a prison term of less than 20 years.

But Bali-based attorney Muhammad Rifan says a deal fell through after the judges later told him they had been ordered by senior legal and government members in Jakarta to impose a death penalty.

The judges, it is alleged, then asked for an even greater sum for a lighter sentence, money Mr Rifan did not have.

On 4 March, Independent Australia published an exclusive article about your son Gibran begging you to spare the lives of Chan and Sukumaran and others on death row.

EXCLUSIVE: Joko Widodo's son begs him to spare the lives of Chan and Sukumaran https://t.co/EeSnV8InaM @IndependentAus

WHY DID GIBRAN DENY ASKING YOU FOR MERCY FOR THE BALI TWO?

Why did your frightened son Gibran deny to the media that he had asked you to spare the lives of the Bali Two ?

Why did an hysterical and screaming Gibran apparently deny to the gullible and clearly inept Murdoch journalist Paul Toohey that he had never studied in Sydney — only Singapore ?

WHY DID JOKOWI FORCE GIBRAN TO DENY HE'D BEEN IN SYDNEY?

Why did you force your eldest son to lie and shame him in this way? Your own behaviour towards him in public reveals how you have no compunction in publicly embarassing him. It says a lot about how ruthless you have become — that you would instruct him to lie for mere political expediency.

WHY DID GIBRAN DENY STUDYING AT UTS: INSEARCH?

Why did Gibran deny that he was a graduate of the University of Technology, Sydney (UTS): Insearch?

Toohey was clearly out to do what is called a "hatchet job" on me and Independent Australia on behalf of News Corp's King Leer, Rupert Murdoch, for reasons I shan't document right now, except to say it involves Murdoch trying to suppress the truth.

Although Toohey did not name me or IA, he nonetheless said the story was "invented".  Given our story was an exclusive, this defamation is easily tracked back to us.

In effect, Toohey was calling me a liar.

A grown-up journalist would not only have accessed the marvellous research archives enjoyed by News Corp journalists, but would also have known that stablemate Greg Sheridan, that respected (by me, not Paul Toohey) foreign editor of The Australian, interviewed Jokowi in person before the furniture millionaire became president.

For the benefit of our readers and the trust we painstakingly work hard to maintain, and for the historical record, as well as to inform the malicious Paul Toohey, let me quote from Greg's article:

'More than that, Jokowi likes Australia, His son studied for two years at the University of Technology, Sydney, and he visited him there. But these matters are far from Jokowi’s mind. Every day he wrestles with the mighty problems of his mighty metropolis of 10 million souls, with a special focus on the poor.'

One of the more troubling aspects of Toohey's reports is that he apparently didn't  bother to check Gibran's student status with UTS.

Nor, it seems, did the team of journalists working on the story back here in Australia, including the female journalist assigned to inveigle from me the names of my trusted sources. They thought I would blista for a sista.

This is a "for the greater good" story and I have no compunction in sharing and supporting fellow journalists so, whilst I reminded her that sources are sacred, I counselled her to contact UTS. I assumed she already knew of Sheridan's article. 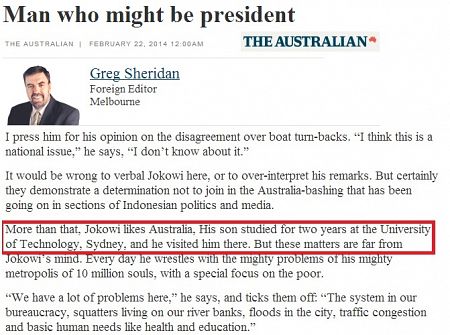 Excerpt from just one of the article's Paul Toohey ignored (Source: The Australian)

UTS HAS A CAMPUS IN JAKARTA WITH MEDIA GIANT KOMPAS GRAMEDIA

If Toohey, who at the time was in Indonesia and desperate to justify his expenses, had done even a modest amount of digging he would have discovered that not only was Gibran a graduate, but that UTS has a South Jakarta campus in partnership with the multimedia behemoth Kompas Gramedia.

But why has UTS not revealed this and why hasn't UTS made a public plea to their graduate's father President Joko Widodo for mercy for the Bali Two?

WHY HASN'T UTS ASKED JOKOWI FOR MERCY FOR THE BALI TWO?

How come UTS kept silent about this? How come Indonesia did? How come Gibran didn't say something?

Why all the secrecy? What are you trying to hide?

There are a few disconcerting dots that need to be joined. And a number of coincidences.

Here are just some, people.

WIDODO SON IN CATERING, LIKE CHAN AND THREE MORE OF THE BALI NINE

But Gibran is not the only one in this sorry saga who is invoved in the catering business.

Like Serco and G4S it is a global vulture capitalist conglomerate mired in multiple scandals and overcharging.

Their huge and greedy corporate claws excavate billions from the diminishing public purse, seemingly privatising and outsourcing all in their path — including, in Australia's case, our conscience and humanity.

Bali mortician instructed to inscribe the names and dates of death for the #Bali9 duo: http://t.co/D29eZXK97W #9News pic.twitter.com/tJsaRMIFks

The spoils of vulture capitalists are often siphoned out of the host country to be buried behind complex and fortified taxation firewalls within labyrinthine tunnels, endless name changes, partnerships, affiliates and offshoots.

Disclaimer: Let the record show that by stating certain facts, Independent Australia catagorically makes no imputation whatever about Gibran Rakabuming Raka and/or Eurest and its various related entities concerning drug smuggling by the Bali Nine.

Now Eurest and Compass, ESS enjoy a very cosy one-way financial relationship with the Department of Defence and the Australian Federal Police.

I could be wrong, but business with these two groups seems to have exponentially increased for Eurest/Compass ever since their four employees in the Bali Nine gang were captured in Indonesia.

The AFP volunteered as the prime informant in this squalid affair and, without doubt, their blood- soiled fingerprints will be found upon the triggers of any guns the Indonesian firing squad aims Chan and Sukumaran.

Oh really Andrew Colvin!!?? WRONG, Fed Police DOES have blood on it's hands for handing over #Bali9 duo!! 😠 http://t.co/Xm8ZAsd1J0 #AusPol

AFP AND A CONSPIRACY TO MURDER

In the public interest, below are just some of the lucrative contracts for you to persuse. They are enlightening to say the least.

If an army does indeed march on its stomach, where does that leave the gutless AFP in relation to aiding and abetting President Joko Widodo in the killings of the Bali Two?

They could have stopped this matter even before it began. They did not.

Even now, they could stop it.

One day, it could prove tantamount to a conspiracy to murder — if not by intent, then perhaps through cowardice, negligence and the lack of duty of care for Australian citizens.

No doubt, Mr Big, who remains as free as a lark will crack open a bottle of Bolley at the same time as the firing squad unleashes its volley of fire. And Australia will be down another two kids not just because of drugs, but also because they were betrayed by the AFP. 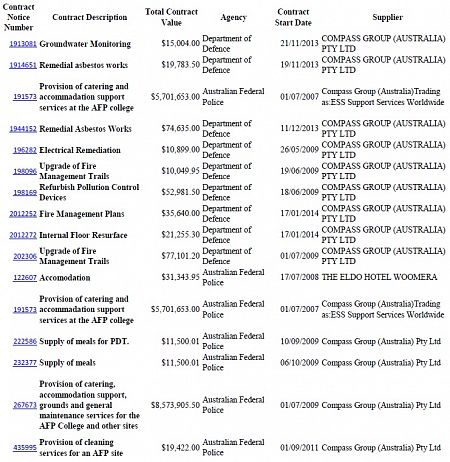