Here we Joh again! The truth about bikie laws and crime in Queensland

The Newman Government's campaign pitch about its anti-bikie laws causing a decrease in crime in Queensland is nothing more than spin, writes former Gold Coast detective Assistant Professor Terry Goldsworthy via The Conversation. 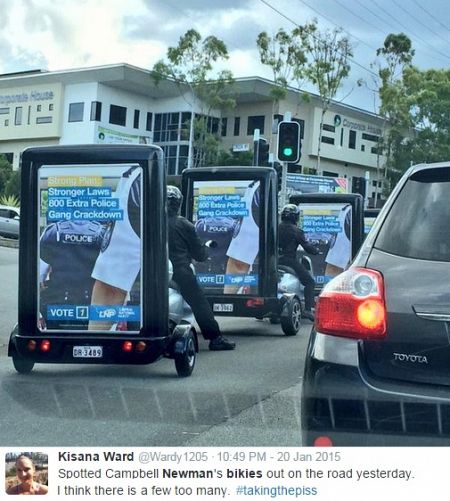 Queensland’s Liberal National government has made law and order – particularly its anti-bikie laws – a key part of its re-election pitch.

The Government recently claimed that 'Criminal Gang laws (are) keeping Queenslanders safer' and that they have driven a general decrease in crime.

Yet when you compare those claims against Queensland’s crime statistics, something soon becomes clear: the spin and the statistics tell two different stories.

An examination of the overall crime rate in Queensland indicates that it has been steadily reducing for the past 12 years. Apart for an aberration in 2011/12, this trend has been consistent.

A reduction in general offences, such as robbery, break and enters, and stolen vehicles was also attributed to the introduction of the Vicious Lawless Association Disestablishment (VLAD) laws, aimed at criminal bikie gangs.

However, comparison of the levels of reported property crime in Queensland year-to-year clearly show that property crime was already substantially reducing in 2013 — before the VLAD laws came into effect. Previous analysis of official data shows that bikies had little involvement in the type of offences being put forward by the Government. As I’ve explained before, Queensland Police data indicates that outlaw motorcycle gang members commit only about 0.6% of overall crime.

Senior Queensland police have also made similar claims linking the bikie crackdown with falling crime rates in the State.

As part of the bikie war, the police have worked hard to win the media war, wooing and winning over most of the mainstream media, in particular the print sector. This is in alignment with objectives set out by the bikie Strategic Monitoring Team to reduce bad news stories — and their efforts have paid off.

Critically, the bikie crackdown has been strongly backed by The Courier-Mail – Queensland’s only major statewide daily newspaper – as this recent editorial shows:

'The Courier-Mail has been unashamedly supportive of the crackdown on outlaw bikie gangs, reflecting genuine fear among Queenslanders who were terrorised by these thugs acting like they ran the state.'

Instead of much-needed investigative journalism on law and order, there has been far too much of what could best be described as regurgitative journalism. Too often, the Government line on “cutting crime” is repeated without meaningful analysis or independent opinion being sought.

However, some media outlets have remained independent and, on occasion, have taken the propaganda to task.

An analysis of media reports on the bikie war by the Courier-Mail and its weekend News Corp stablemate the Sunday Mail over a two-month period showed that 60% of stories had a police viewpoint, while only 20% had independent input. Queensland’s media has been flooded with operational police stories, with seemingly every bikie arrest the subject of a specific media release.

In the same period, other offenders arrested for similar offences often didn’t rate a mention.

In a Government media statement released the day before the election was called, Queenslanders were told that since the anti-gang laws were introduced, more than 1700 “criminal gang participants” had been arrested.

Yet Right to Information data from the police showed that there were only 900 gang members in Queensland in 2013. No information was provided to the media as to exactly how many of the 1700 “gang participants” were actual criminal gang members. Perhaps no-one bothered to ask.

Politicisation of the police

In July 2014, Queensland Police Commissioner Ian Stewart went public claiming a crime reduction of at least 10% before the official crime data was settled.

As the Courier-Mail reported at the time:

Crime in Queensland dropped at least 10% in the past financial year, according to Police Commissioner Ian Stewart, who attributed the fall to sweeping reforms and a crackdown on bikies.

The state’s top cop says he can’t release official figures yet but declared he expected to exceed his target of a 10% decrease in crime.

“I don’t want to crow about it but when I started last year I said I was hopeful we would get a 10% reduction in crime, that is the reported crime … I think we’re going to exceed that and quite honestly that is a real hallmark and milestone figure."

Stewart was rightly criticised for making that claim. Less than a fortnight later, the data showed that the overall crime rate had decreased by only 2.1% and not “at least 10%”, leading to calls for an independent body to interpret and publish an overall view of crime statistics.

Here we Joh Again! The Queensland Police and the LNP https://t.co/Hg4U8XpKTz @IndependentAus Cops on call anytime for LNP

Perhaps worst for the government was the fact that in an attempt to claim the much higher decrease they had discarded an entire crime category, 'other crime', as not being crime important to “mum and dads”. This category contained domestic violence crime, which had increased some 15%.

Within days of this being identified in the media, the Government suddenly announced an inquiry into domestic violence in Queensland.

Claims by police that they could not have achieved the overall crime results they have without the bikie legislation are unsustainable.

The separation of powers doctrine would dictate that comments with political connotations, such as the ones we have seen from senior police, should not have been made. It was the government’s failure to observe these principles in its unfounded criticism of the judiciary that led to a public backlash and an apology from Newman in July 2014.

Tellingly, despite the High Court decision in November 2014 clearing the way, not one other Australian jurisdiction has moved to implement similar bikie laws to Queensland, despite having ample time to prepare and do so.

In reality, other jurisdictions appear to see the VLAD laws for the distraction that they are and to realise that the laws remain untested despite government claims to the contrary.

The opposition’s plan – what plan?

If the Liberal National Government’s VLAD laws are unpalatable, the alternative proposed by Labor is hardly more enticing.

Labor has mooted a return to utilising their Criminal Organisation laws — laws that also have an association aspect.

Introduced in 2009, the “elite” anti-bikie squad, Taskforce Hydra, failed to make a single successful application in the four years following. The only application sought was against the Gold Coast Chapter of the Finks and this action was discontinued in the Supreme Court in 2014.

Labor has been all over the place in its stance on bikies and crime.

The opposition voted with the Liberal National Party to pass the laws in October 2013, even while criticising the Government’s rushed approach.

Opposition leader Annastacia Palaszczuk has since complained that the laws had

"... gone too far, affecting innocent Queenslanders whose only crime is to ride a motorcycle."

Labor is now promising to “repeal, review and replace” the VLAD laws, with little detail on what would replace them.

As a former Gold Coast police detective with 28 years' experience, I’ve investigated my fair share of bikies in the past and, as I’ve said many times, being a critic of poor policy does not make me an apologist for criminals in the bikies' midst.

It’s just a pity that we’ve seen this area of law-and-order policy become so politicised from all sides, at the expense of giving more credit for falling crime rates where it’s due.

Who deserves more credit for a safer Queensland?

The current Queensland crime rate is more likely to be the product of a long-term, declining trend, combined with the Newman Government employing an extra 800 police.

Those are certainly more likely to be significant factors than laws that have only been used minimally, on a single group, which commits a very small amount of crime.

The issues of better resourcing, better crime management and an actual commitment by senior police to deal with criminal groups are the real reasons for recent successes.

The government’s own bikie Strategic Monitoring Team has recognised this. Last year, the former army officer heading the team told the ABC that significant decreases in Gold Coast crime could “be attributed to more police available to carry out operations on the Gold Coast and the targeted nature of the enforcement activity”.

Politicians of all stripes will always try to take credit for falling crime rates. But the media and voters need to look beyond the official spin and give credit where it’s really due for the long-term decline in Queensland crime: in particular, to the many unheralded police officers doing their jobs.

This article was originally published on The Conversation under the title 'The revealing facts on bikie laws and crime in Queensland'. Read the original article.

The Courier-Mail spins Palaszczuk campaign launch speech. http://t.co/Ftak1qkImr I wish we could vote News Corpse out in Queensland.