A great Australian was given a great send-off. Barry Everingham joined hundreds of mourners to celebrate the Life of Sir Zelman Cowen. 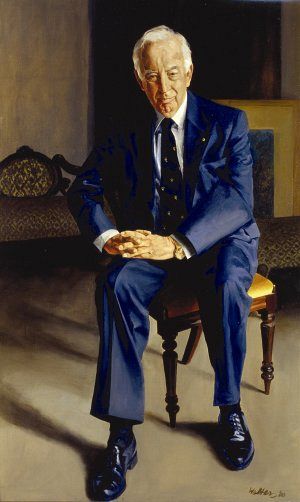 It was fitting tribute to the man who “healed the nation” after Sir John Kerr’s incredible sacking of the Whitlam Government in 1975, which divided the country and brought on a push for a republic.

Speaker after speaker at the Memorial Service alluded to Sir Zelman’s and Lady Cowen’s influence, which soon put the incident on the back burner.

Readers will, I hope, excuse me for bringing politics into this tribute to one of the greatest-ever Australians, but I was sorry I couldn’t see Tony Abbott’s face from where I was sitting – he was late arriving and obviously wasn’t sitting where he should have been – when the speakers referred to Sir Zelman’s love for humanity, which was displayed so brilliantly at citizenship ceremonies at which he officiated.

Those ceremonies would have included migrants who came by boat and who the Opposition led Tony Abbott continues to disparage.

A quote from The Memoirs of Zelman Cowen, A Public Life was published on the back page of the Order of Service and read:

‘On occasion, when I spoke at citizenship ceremonies, I would recount the story of Isaacs, the son of poor immigrants, who had arrived in Australia only a year before my birth. I could reflect that my own story, while different in some respects, was not so very different, and I said that I believed that this should carry a message to those who participants in such ceremonies, and who could see the evidence of great human opportunity in such life stories. We have reason to be very proud of a country which makes this possible and actual.’

Speaker after speaker eulogised Sir Zelman: his son Rabbi Dr Shimon Cowen; Emeritus Rabbi Dr John Levy (who was the main celebrant at the Service); Professor Don Marwell, Warden, Rhodes House, Oxford; Steven Skala; and the Member for Kooyong, Josh Frydenberg who kindly sent me a copy of what he had to say.

Frydenberg described his friendship with Sir Zelman as “the most special  friendship  of his life”.

He said he met Sir Zelman two decades ago, when he was a law student who dreamt of going to Oxford.

“He was colossus, whose public life had few parallels and it was not a meeting of equals.”

Frydenberg recalled his “Sundays with Zelman” and said it didn’t matter if it was a discussion about literature or music, philosophy or the law, Zelman was equally in command.

He was a polymath and great conversationalist.

He said Zelman described his time at university as a place of riches for “it gave his mind the space to roam”.

Among the many anecdotes we heard, this is perhaps the best and it goes as follows:

Zelman recalled the weeks after which he was officially asked to be Governor General but could not make it public.

In July 1977, a law professor at the University of Queensland brought along a visiting American academic to see Zelman.

During the conversation, the professor asked Zelman’s thoughts about who would be the next Governor General. Zelman started coughing into his hands, reluctant to give anything away. Then, without hesitation, the American academic “with some knowledge of the current controversies” asked ‘what superannuated old fool would wish for such an appointment?’

Zelman would later say the only issue he would take with this was that he wasn’t superannuated!

His academic honours were legendary and were listed in the Order of Service along with the other honours bestowed upon him — including his three separate knighthoods.

The Service was a fitting tribute to the man whose like will probably never see again, but whose legacy will live for generations.