In the spotlight for all the wrong reasons after Four Corners last night, things get worse for Tom Tate as IA releases the first part in a comprehensive new investigation into the "unorthodox" activities of the Gold Coast Mayor.

Today, Independent Australia releases the first part of a stunning new investigation into Mayor Tate, exposing his allegedly underhanded practices as a developer prior to becoming Mayor.

The investigation, published with comprehensive supporting documentation, shows how Mayor Tate in 2005 entered into a partnership to develop land in Albury with that City’s former mayor, Amanda Duncan-Strelec and her husband.

Then, rather than keeping his side of bargain, Tom Tate sold this land to a third party without the approval of the Duncan-Strelecs and despite a court sequestration order being placed on the land. This led to intensive litigation and has been reported elsewhere in the media.

What has not been reported is that the man Tom Tate sold the land to, out from under former Mayor Duncan-Strelec, Francis Kovacevic, was a bankrupt at the time who continued as a company director under one of the four names he has registered with ASIC — a serious criminal offence.

Court testimony subsequently revealed that Tate was a personal friend and business associate of Kovacevic for ten years prior to the sale, leading to the question: did he know he was trading with a bankrupt? 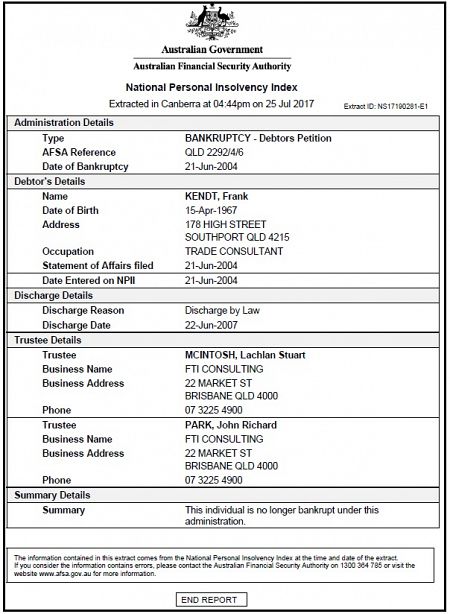 In what should concern all Australians, when ASIC was alerted to the fact Kovacevic was a bankrupt, under his alias Frank Kendt, it declined to investigate.

Just as concerning, IA investigations have revealed that there is no provision in Australia's corporations law prohibiting any person registering as a company officeholder under a false name and/or birthplace, unless an intent to commit fraud can be shown. And despite compelling allegations of just that, fraud, police have also declined to pursue the matter.

In addition, the bankruptcy trustees for Kovacevic, under his alias Kendt, did nothing to prevent him from continuing to do deals whilst insolvent. Also an offence.

The Supreme Court judge hearing Amanda Duncan-Strelec’s 2010 action against Tate declined to allow her to question the now Gold Coast Mayor over his relationship with Kovacevic/Kendt. The Duncan-Strelecs subsequently lost the case, leading to their eventual bankruptcy.

Kovacevic, however, continues to operate as a businessman on the Gold Coast to this very day.

This investigation highlights the need for a 100 point check for identity for company directors ‒ as proposed by the Labor Party, though not yet endorsed by the Government ‒ to stop phoenix directors like Kovacevic preying on the unwary.

It also, like Four Corners last night, puts a spotlight on the integrity and probity of Gold Coast Mayor Tom Tate. The question many will be asking is whether he is a fit and proper person to lead Australia’s second largest municipality — and one flooded with money from developers.

This is the first in a series of articles examining various aspects of Tom Tate’s development activities prior to becoming Mayor of the Gold Coast. The next part will investigate the fake forestry bonds distributed by Kovacevic, which formed part of the consideration for the sale of the Albury land mentioned above, and which was also used in several other highly questionable transactions.

You can read the full investigation – ‘The mystery of the mayors and the phoenix with four names’ – HERE. 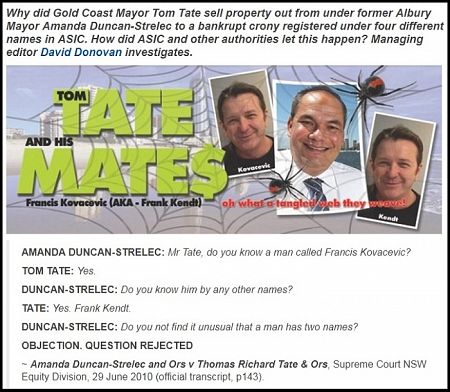 Do you have any more information about anything to do with this story? Contact us, in confidence, HERE.

Find out more about this story HERE.