Independent Australia has been informed that Patten owes Pell his job and felt obliged to respond to Pell's plea for help after a series of public relations blunders and manoeuvres scripted in Rome and Australia backfired on the increasingly beleaguered Cardinal.

Further, IA is aware that some Vatican and Australian communications personnel have become increasingly disaffected with what they interpret as Pell's disingenuous conduct, and his continuing lack of duty of care and compassion for victims/survivors.

As well, there is also some antipathy between Pell's Roman staff and the office of the Archdiocese of Sydney whom, we are told, are getting fed up with being on call 24/7 and acceding to the demands of the autocratic Pell and his various acolytes.

Pell apparently still treats Sydney HQ as his own turf.

In July 2014, the erudite and personable Patten was made president of the Vatican's extensive media and communications divisions, charged with overhauling all print and electronic matters and to usher the Vatican into the digital age.

Much to the ire of many, Patten was recruited in a phone call "out of the blue" by George Pell, but why was the Prefect of the Secretariat of the Economy now lording it over the Vatican's communications unit and hiring staff, and overruling incumbent administrators ?

On the surface, Patten's appointment was ostensibly to cut costs but it was enough to ruffle the feathers of angels.

In response to an earlier report on the Vatican's media and communications by consultants McKinsey & Company – famous for their Anil Kumar and Rajat K.Gupta insider trader scandals – to overhaul media, Patten was eventually appointed and now oversees a committee that includes former Singapore Finance Minister, George Yeo.

From BBC to right hand of Pope: Patten to advise Vatican on media strategy < can we expect honesty & transparency? http://t.co/a3gcimVUDc

It has been put to IA that Pell's modus operandi was this: that by engaging His Lordship to the Holy See, he would also be able to "use" Patten to mount and oversee a pro-active media counter insurgency against fallout from the Royal Commission and witness statements, as well as the unresolved allegations of sex abuse against the Cardinal contained in the 2002 Southwell Report.

Independent Australia makes no imputation whatever against Cardinal George Pell.

We have been informed that not only was Pell dissatisfied with his media advisers, but there were some in their midst he did not trust and rightly doubted their loyalty to him.

Pell and Patten are said to have become firm mates and share a number of similarities. They seem to have man crushes on one another. Pell is notorious for his fawning and courting of members of the establishment, the rich and powerful. Patten, not so much, perhaps because he is already of the Establishment.

They're both Catholics, although only one of them seems to practice the faith. And it's clearly not Pell. They both enjoy a drink. Top shelf. Champers. That sort of good thing. Amen to that.

Both are alpha males.

Both assisted with visits by Pope Benedict XVI to their respective countries — the UK and Australia.

Both have had heart surgery.

BOTH PATTEN AND PELL HAVE HAD HEART SURGERY — DEJA VU?

Heart surgery has led to both either resigning from work or modifying conduct and duties; such as Pell not being able to fly to Australia to give evidence in person to the current sittings of the Royal Commission into Institutional Responses to Child Sexual Abuse and Patten standing down as Chairman of the BBC Trust.

They've both with involved with (mis)handling the historical (and other) scourge and aftermath of systemic sex abuse of children and adolescents within their respective institutions.

@GayCarBoys @bustersdah #Pell was NEVER exonerated by the Southwell Report, but the report nearly disappeared https://t.co/Ofysyzkdio

One of them, Pell, has also faced allegations of sex abuse. He claims he was "exonerated" from such allegations. That is incorrect, as Independent Australia revealed yesterday in our comprehensive article on the 2002 report by AJ Southwell QC.

You will recall that it was Christopher "Mount" Patten, known as "The Last Governor" who helped the sun to finally set on the British Empire's rule of Hong Kong.

Last week, Britain's Dame Janet Smith released her report into the BBC's culture and practices during the Jimmy Savile and Stuart Hall. The report on the latter was done by Dame Linda Dobbs.

The reports make turgid and difficult reading, but some of the material and witness statements, including the excuses and the memory fails, will, sadly, be so familiar to those of us who have been following the Royal Commission and State Inquiries into child sexual abuse.

Jimmy Savile's name was synonymous with the "Beeb". The Corporation's own Savile profile cites:

Savile was one of Britain's biggest stars, a larger-than-life character who was known for tea-time TV favourites like Top of the Pops and Jim'll Fix It as well as stints on BBC Radio 1.

At the same time, it has since come to light, he was exploiting his status to prey on hundreds of people - girls and boys, men and women, but mostly vulnerable young females.

He assaulted and raped them in television dressing rooms, hospitals, schools, children's homes and his caravan.

The scale of Savile's crimes was "to the best of our knowledge unprecedented in the UK", according to a report into his activities titled Giving Victims A Voice, which was published in 2013.

The abuse was thought to have begun in the mid-1940s, when he was in his late teens or early twenties, and lasted until 2009, two years before his death.

A former popular BBC TV presenter, 86 year old serial paedophile Stuart Hall is now in prison after eventually pleading guilty and being convicted in 2013 to indecently assaulting girls as young as nine to 17 years of age.

LORD PATTEN AND THE COVER-UPS, PAYOFFS AND SCANDALS

Lord Patten's stint at the BBC was not as as easy for him as cutting the empire's umbilical chord between the United Kingdom and Honkers.

When he resigned in May 2014, after his heart operation, it has to be noted he left the BBC in a time of turmoil and torment.

As the UK Telegraph's Gordon Rayner wrote of Patten at the time in an article headlined 'The cover-ups, payoffs and scandals of Lord Patten's reign':

He had hoped to bring in a “golden age” of governance at the BBC, but instead Lord Patten presided over arguably the most crisis-ridden period in the corporation’s history. The epitaph for his chairmanship will be dominated by three names: Savile, McAlpine and Entwistle.

Whilst reading Lord Patten's resignation statement, I was gripped with a feeling of acute deja vu, that was compounded by one of my well informed sources who told IA:

As is well known, I underwent angioplasty while in Hong Kong and a cardiac ablation procedure some seven years ago; and since then I have been regularly assessed by my cardiologist. Last year, for example, I had both a cardiac scan and a treadmill test. But on 27 April, I experienced serious chest pains and was admitted to Chelsea and Westminster Hospital that night. I was transferred on 28 April to Royal Brompton Hospital where I was successfully treated with a combination of bypass surgery and angioplasty, which had been developed by doctors at the hospital (this is discussed in a footnote below). These procedures have been successful and have ensured no permanent damage to my heart....

....On the advice of my doctors, however, and having consulted my family and friends, I have concluded that I cannot continue to work at the same full pace as I have done to date, and that I should reduce the range of roles I undertake. On this basis I have decided with great regret to step down from much the most demanding of my roles – that of Chairman of the BBC Trust. This is a position that requires and has received from me 100 per cent commitment, and has been my priority at all times. It would not be fair to my family to continue as before; and equally it would not be fair to the BBC and those it serves not to be able to give that commitment which the role demands. I have to begin by taking a six week break from any work at all.

"It's a sad story and wasn't of much interest to me" - George Pell speaking about Ballarat's Gerald Ridsdale #7News https://t.co/XzRAwkXzP2

FATTY PANG GETS A CALL FROM GEORGE PELL

I was not the only one surprised when just about on the knocker of six weeks, old Fatty Pang (a Chinese pet name for Patten) gets a call from Cardinal Pell, who offers him a job with the Vatican.

Throughout the Pell black ops campaign – for that is what it truly is – there have been some deft moves apart from the constant redacting and deleting of material from the web.

Some of the statements issued on behalf of Pell are not on Vatican letterhead – or any letterhead.

These are sophisticated and pre-emptive damage control procedures. They are not accidental.

Some of the victims also have a nickname for Cardinal George Pell.

It is not as cute as Fatty Pang.

Cardinal George Pell appears for the third straight day today (2/3/16) in front of the Royal Commission via videolink from Rome; watch it here: 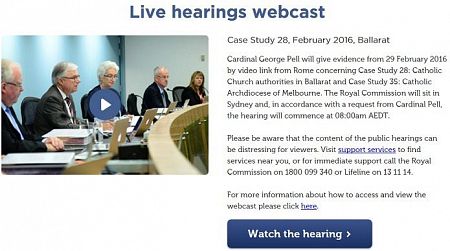 DISCLOSURE: Tess Lawrence has worked for the Christian Brothers in matters specific to child sexual abuse, and continues to do pro bono work for victims/survivors, families, friends, supporters, carers, and legal and other advocates.

Father of abuse victims says he has given up hope Cardinal George Pell will help fix things https://t.co/wnge1ahkPl