Highlighting the dangers to resource-rich Australia from ISDS clauses in trade agreements such as the apparently imminent TPP, a Canadian company is suing Romania under a trade pact after it blocked an open-cut mine over environmental concerns. Deirdre Fulton reports (via Common Dreams). 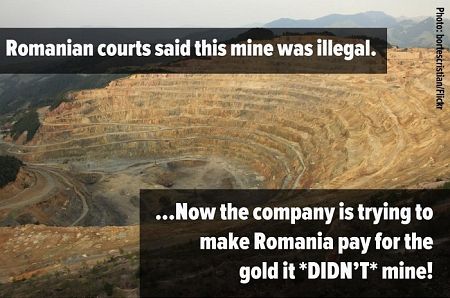 OFFERING A STARK WARNING of how corporate-friendly trade pacts, such as the Trans-Pacific Partnership (TPP) put both democracy and the environment at risk, a Canadian company is seeking damages from Romania after being blocked from creating an open-pit gold mine over citizen concerns.

Gabriel Resources Ltd announced last week that it had filed a request for arbitration with the World Bank's International Center for Settlement of Investment Disputes — a body not unlike the secret tribunals that critics like Senator Elizabeth Warren (D-Mass.) have warned against.

The corporation's Rosia Montana open-pit gold mine project stalled after a series of protests in cities across Romania in 2013 demanded Gabriel's plan be dropped. As reported at the time, Romanian residents and environmental activists have opposed the mine since it was proposed in the 1990s, charging that it would blast off mountaintops, destroy a potential UNESCO World Heritage site, and displace residents from the town of Rosia Montana and nearby villages. In particular, local communities opposed the use of cyanide as part of the extraction process.

Such opposition led to widespread street protests in 2013, which in turn pressured the Romanian Parliament to reject a bill introduced by the government that would have paved the way for the mine.

Now, Gabriel Resources, which holds an 80 per cent stake in the Rosia Montana Gold Corporation, says  [PDF] the country has violated international treaties.

Bloomberg reports that, in 2013, Gabriel threatened to seek as much as USD $4 billion of damages should Romanian lawmakers vote to oppose its gold and silver project in the country.

But as Claudia Ciobanu, a Romanian freelance journalist based in Warsaw, wrote on Monday:

'Gabriel is...effectively trying to make Romanians pay for having pushed their legislators to do the right thing.'

'With the vast expansion of the use of investor-state dispute settlement brought about by the TTIP...Romanians and other Europeans can only expect more of such cases. According to some analyses, the TTIP and a few other trade agreements negotiated at the moment would expand the coverage of investor-state arbitration from around 20% to around 80% of investment flows to and from the U.S. and the EU. Additionally, current experience shows that developing countries are much more often targets of corporations than rich ones.'

'The recent case opened by Gabriel Resources against Romania serves as an omen of what Europe's future may look like if citizen power is not restored.'

This story was originally published in Common Dreams on 28/7/15 under the title 'European Mining Dispute Illustrates Risks of Corporate-Friendly Trade Deals' and has been republished under a Creative Commons licence.

28 May 2022, 4:00pm After a series of tragic mass shootings in the U.S., students are standing up to ...
Join the conversation
comments powered by Disqus
News updates