Investigations editor Ross Jones reports on the visa saga of one small-time offender and why Ray Hadley, News Corp and Peter Dutton seem obsessed with him.

AHMET CANDEMIR was born in Turkey in 1968. In late 1969, when he was 18 months old, his family – parents and four older siblings – migrated to Australia. When he was 16, his father suffered a stroke and Ahmet left school to help support his family.

... offences of aiding and abetting or counselling to pervert the course of justice, doing an act with intent to pervert the course of justice, resisting or hindering a police officer in the execution of duty, possessing prohibited drug (amphetamine), goods and personal custody suspected of being stolen, dealing with property suspected proceeds of crime, and driving a vehicle recklessly or in a dangerous manner.

Candemir had returned to Turkey in 1988 and there met his future wife, who migrated to Australia to live with him.

The son suffers a serious affliction:

The applicant’s son has Joubert Syndrome, a genetic disorder that causes physical and intellectual impairment.

That is mainly because of Ahmet’s colourful history as a junkie. His story reads like a down-the-food chain character in an Elmore Leonard novel — details of his chequered career, if that is the word, can be read in full here.

Ahmet was most recently arrested in October 2012:

Ahmet was denied bail and sent straight to the slammer, where he lingered for three years awaiting trial. Apparently, the prosecution kept asking for delays on the grounds they were not yet ready. It was not until November 2015 that Ahmet was tried for the 2012 charges. At trial, the prosecution dropped the most serious charges and Ahmet was given a sentence of three years one month, for the relatively minor supply charges. IA understands the most serious charge was the supply of 5.4 grams of heroin.

Whether you agree or disagree with the decision to reinstate Ahmet’s visa, it was a valid decision handed down in a procedurally and legally correct fashion.

On 8 March 2016, four months after he was sentenced, Ahmet’s class BB subclass 155 five year resident return (permanent) visa was mandatorily cancelled under section 501(3A) of the Migration Act 1958 and, on 29 May 2016, Ahmet was taken straight from prison to the Villawood Immigration Detention Centre.

Ahmet appealed the decision. On 11 August 2016, his first attempt was knocked back. He sought a review of this rejection decision and, in late February 2017, this review was heard by the Administrative Appeals Tribunal (AAT).

This time Ahmet was successful and, on 21 April 2017, the Tribunal decided:

'The decision under review is set aside and in substitution, the Tribunal decides that the cancellation of the applicant’s visa is revoked under section 501CA(4) of the Act.'

On 21 April 2017, Ahmet received a letter from the AAT advising him that:

We have decided to set aside the Department's decision to cancel your visa. This means that your application has been successful.

So that went pretty well, but the Minister still had 35 days, or until 27 May 2017, to appeal the decision.

Whether you agree or disagree with the decision to reinstate Ahmet’s visa, it was a valid decision handed down in a procedurally and legally correct fashion. The full story is laid out here. 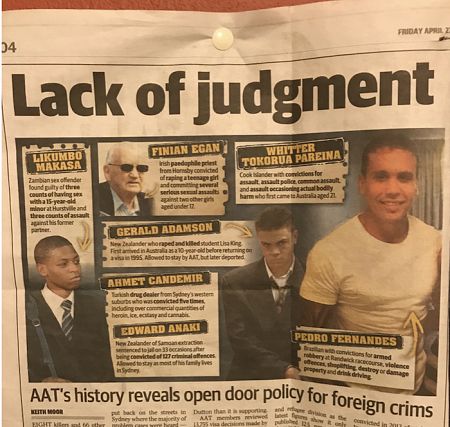 The article took the AAT to task – in the usual News style – about the number of visa cancellations it had overturned:

'AAT members reviewed 13,755 visa decisions made by ministerial delegates in the past financial year, rejecting 5,276 of them while only affirming 5,110. The rest were either withdrawn by the applicant, dismissed by the AAT or the AAT had no jurisdiction to hear the cases.'

'The Minister personally makes all the decisions...people are...separated from their families for a long time, and the Dept does not consider their families or their caring responsibilities.' Cancelling visas on ‘character’ grounds: The Ombudsman reports https://t.co/oYR8DQdMde

On 17 May 2017, the Daily Telegraph ran a story headed, 'Turkish drug dealer Ahmet Candemir allowed to remain in Australia despite previous convictions’:

'A Turkish drug dealer convicted five times including over commercial quantities of heroin, ice, ecstasy and cannabis was allowed to remain in Australia after the Administrative Appeals Tribunal quashed a decision to deport him.’

For some reason, of the 5,276 individuals who had their visas reinstated, News Corp seemed particularly interested in Candemir.

Ahmet had been on methadone since his October 2012 arrest. He stayed on the methadone and did not offend again. The 27 May 2017 deadline for the minister and his department to appeal the decision came and went with no further notifications. Ahmet and his daughter started a small business making and selling scented candles, and built a wholesale customer base so that the modest business was keeping its head up and growing.

Then, out of the blue, on 18 December 2017, Ahmet received a letter from the Department of Immigration and Border Protection, advising him that four weeks earlier, back on 8 November 2017, the Minister had overturned the AAT’s most recent decision and again revoked his visa.

The purpose of this letter is to advise you that on 8 November 2017 the Minister set aside the Administrative Appeals Tribunal's decision to revoke the original decision. The Minister cancelled your visa under s.501BA of the Migration Act because he was satisfied that you do not pass the character test due to of the operation of s. 501(6)(a) and the Minister was satisfied the cancellation was in the national interest.

The date of revocation, 8 November 2017, was 31 weeks after Ahmet was handed his visa back. The date Ahmet was advised of the decision, 21 December, was 43 weeks later. Both were a lot more than 35 days.

Then, nothing. The Turkish drug dealer was ignored, free to live with his family and mingle in the community.

Until, on 13 November 2018, a full year after Dutton overturned the AAT’s decision, Border Force turned up at Ahmet’s unit block, stuck a finger over the security camera and rang the bell.

Ahmet was taken directly to Villawood, where he currently resides.

For some reason, Ahmet’s case drew the attention of 2GB radio shock-jock Ray Hadley. Not long after Ahmet was taken to Villawood, Hadley used his show to paint him as a poster boy for immediate deportation, regardless of the known fact that he had lived in Australia since he was 18 months old and so, while certainly a drug dealer, was hardly Turkish — more western Sydney.

Hadley regurgitated the News article that Ahmet had been convicted of supplying commercial quantities.

Ahmet’s daughter wrote to Hadley, explaining her father’s circumstances, noting his conviction had been 5.4 grams of heroin, that he had not committed any further offences since his release from prison and asking Hadley, politely to get his facts right.

Hadley responded with the News article, writing, ‘This is your father, he should be sent packing ASAP’.

Ahmet's daughter then pointed out her father was a drug addict. The same as Hadley’s son, a serving NSW police officer, who got done for possession of 0.79 grams of cocaine — busted in a pub.

'Don't involve my son in this discussion, you grub. Your father is getting what he deserves. Thanks for the email today, it gives me another chance to talk to the Minister about sending him back to Turkey.’

It can be argued that possession of illegal drugs by a serving police officer is a much more serious offence than a two-bit crim packing a few grams. It goes to the very fabric of law enforcement. How many mates did this cop have who knew what he was doing? How many other times did he break the law? Bent coppers are the worst of the worst.

Why are News Corp and Hadley so obsessed with a small-time drug user and peddler? Why has Hadley been talking with Dutton about one detainee out of 5,276? Why Is the Minister so down on this guy when much bigger fish, like William Betham, are free to roam the Gold Coast?

Hadley/Dutton/News — an unholy triumvirate if ever there was one.

Order the Ashbygate book by clicking on the image above.