LET ME START by saying I only speak for me.

I don’t and never will claim to speak for other survivors of institutional sexual, physical or mental abuse.

Too many people do this meaning well, but the group of people into which I fall is a special group: we are the state wards from 1980 to 1990-95. We were the street kids that Father Bob was trying to save.

Here is the sequence of these places over a four-year period: Mercy Family Care, Baltara (Parkville Youth Detention), Glastonbury, Turana Youth Detention Centre, Lismore House, back to Turana, then Lismore House again, where I was shown the door for my 16th birthday. 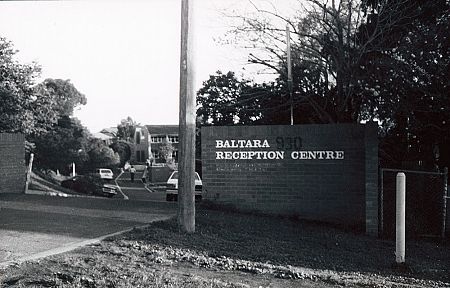 Baltara Youth Detention, circa 1970s. 'You’re going home In the back of a divvy van', meant something different to us kids.

In all these places, I was sexually, physically and mentally abused. I also ran away a lot and hung out in the city or took off to Queensland. Over my life, I have had many jobs and lived a pretty much dysfunctional life. My formal education stopped at 13.

In this world, you become one of two things: predator or prey. These lessons you keep forever and they lead to a life of crime, or a life of abuse as that is what they taught us — to hate ourselves, to cut ourselves.

I can ramble on here as to write of this sets me off. It still hurts — I am 47. The other effect of a life in "Out-of-Home-Care" (those are the pretty words we use now) is that we live a life without secure housing and in poverty.

I tell you this, not so you will feel sorry for me; I tell you this, so you understand the maze in which we, as survivors, find ourselves if we choose to ask for redress in court.

Who owns these places? What abuse can I prove? Will I have to go to court, or will they negotiate? The answer to these questions is that the places to which the government sub-contracted care are too hard to sue. So I’m lucky I was raped by staff in Turana … yes, that’s what we are dealing with. I get to sue because staff raped me in a government-owned institution and, when I complained, they housed me with a known sex offender as punishment.

This is one instance. I was abused daily for four years.

Getting screamed at daily can have the same mental effect as being brutally raped — we are all different.

And people ask why we need a decent redress system. We take (I use the word "take" as we still do this) little kids and abuse them — nothing has changed in 30 years. I am telling you this in the hope you get a feeling of what we have endured and why we want real redress. Not for pity. I write this because I have learnt to lose the shame where others haven’t, so I can speak. Men often don’t tell other men how staff let other kids attack you, then let you know the attacks can stop if only you do this. I don’t feel the shame that speaking of this brings. I`ve found healing in speaking of it. We all heal differently and the one good thing about this is that letting the public know gives me power.

I am involved in setting up a charity that hopes to make the life of kids in care better and improve lifelong outcomes and, as I suspected, this began to trigger my feelings of depression. I’m lucky I have friends that understand my issues and who spoke to me, and stopped this news triggering of deep depression. (You know who you are — thank you.)

As this redress scheme will become the standard, basically setting a price on abuse, it’s important to understand why this is bad. And it’s not about the money — abuse victims have been kicked so much since childhood that we always knew we would be rorted (or ripped-off) on that. It’s the Coalition's "we won’t help anybody out of poverty" stab in the guts that hurts. As somebody who left school at 13, with dyslexia, and on the bottom rungs my whole life, I have to ask, does Mr Porter think if one of us gets out of poverty, he or one of his friends must take their place down here?

So, let’s start with the money. It’s an insult but, like I said, we always expected it. If you’re going to give somebody like me without housing (I sleep in my childhood home) just money, no services, (as this Bill proposes) the $150,000 just doesn't cut it.

Malcolm is in furious agreement with Bill. The commonwealth redress scheme that lets the Catholic Church off the hook. #qt

We need secure housing. We are terrified that in our old age the same organisations that abused us at 13 will be there to do it at 83.

We need secure income. I have been on and off the pension all my life until Mr Morrison put me on Newstart. This has left me in absolute poverty and financial obligations have sent me to mental wards. I have had drug habits before. So, special cases like me would receive $150,000 and most will only get between $15,000 and $30,000, I think. Who makes these decisions and on what basis?

Now the whole premise is, apparently, that they must set redress at a low enough level so that every organisation responsible for abuses signs up to the scheme. We are not the priority here, we are just the plaything of the government. So, to us, it looks like the people that committed the crimes sit about and decide on what they are willing to pay and if we say no, we get nothing. Yes, "forgotten Australians", that is the perfect term for us.

There is no support in here either for medical or psychological help or funding for forming groups so we can speak and support ourselves. None of this.

Now, if you look at what a place like Open Place does (this is where I receive psychology funding for 25 visits a year) they help with record finding and dental work. This is important as we all have rotten teeth — you don’t brush your teeth when you think you're worthless. They also run monthly lunches and social events for people like me —  wards of the state before 1995. The story behind this funding and how it relates to governments worried about legal bills is long and I don’t have time to cover it here. There are many twists and turns in the history of state care. Open Care is a great model for this sort of service.

The other evil thing in my opinion, on Porter's redress, is the exclusion of people that have committed crimes they consider serious. This government tries to deport autistic kids to Canada for graffiti on the grounds that it's a "serious" crime. Most of us have committed crimes, such as drug taking, or some of us have sold drugs. So Mr Porter has just excluded most of us. He also has measures that say "take it or leave it" and gives people 30 days to decide.

This will result in some people killing themselves.

And the final point on my bad list (though there are many more) with this scheme is about my mother. Last year, the telly was on and I was yelling at it. Mum noticed that it was about a place I had been in. I could see the cogs rolling around as it clicked. See, you don’t become a ward of the state for nothing, I was well messed up. But from day one I complained. From day one, Mum asked about the things I said on weekend leave (yes, we were in training for prison life and we got "buy-ups" and seven smokes a day, just like gaol). She was told, "He is just lying, he's a little shit", and she believed it — she comes from a world where you believe people in charge.

When it comes to redress for child sexual abuse, all victims should be equal https://t.co/q7ac0QN6NL via @ConversationEDU

Then I watched her collapse as she realised that she had sent me off to government care and this had happened. All my mental problems made sense and she blamed herself. Now my mother would never ask, or even admit, that she should speak to somebody about this. But therapy for the family of abuse victims is so important. I have put my family through hell. When I have been found in a ditch with my wrists slashed at 3am, it’s Mum the police ring — of course, she needs therapy.

Now that I have taken you all to a dark place, let me say this is a time for hope. Mr Porter may have read his horrible rubbish out in Parliament, but that doesn’t have to be what passes. Politicians can now change in both houses. They can do what we expect of our Parliament and do the right thing and make changes — big changes.

So, with that in my mind, here is what my redress looks like.

My redress considers our needs. Housing first. Stable, safe housing is the start of all recovery. I have been on a waiting list for 15 years in Victoria for a one bedroom flat, as an ex-state ward — this is a disgrace. So at the very least, state housing should be available to us.

As I stated before, the model of Open Place, put in place by the Victorian Government for state wards before 1995, is a great model and can be duplicated.

So now we get to the delicate side of money. Again, as a victim, I speak for myself and nobody else.

I would settle for a nominal amount of $50,000 if I was given a pension above the poverty line. It could be written into the Social Security Act and be available to all former state wards that need social security. That way, we would have financial security for life and not be constantly made to feel like crap by our government because we have problems getting our lives together. The government broke our lives and they can’t be fixed. You can at least do this.

So now isn’t the time to feel bad, it’s the time to demand to see your Federal MPs and tell them what your redress should be — I just listed mine.

Duncan Storrar is an anti-poverty advocate and has started an advocacy service for children in care and their families.

Child abuse redress scheme: Church says it won't sign up unless states and territories do, billions on the line https://t.co/cWWKZeodwD via @abcnews