Dirty money and the RBA

By Tess Lawrence | 17 September 2012, 11:26am | comments |
The grotesquery of corruption within our banking systems seems endless, writes contributing editor-at-large Tess Lawrence, with vaultlines leading to the Reserve Bank of Australia. 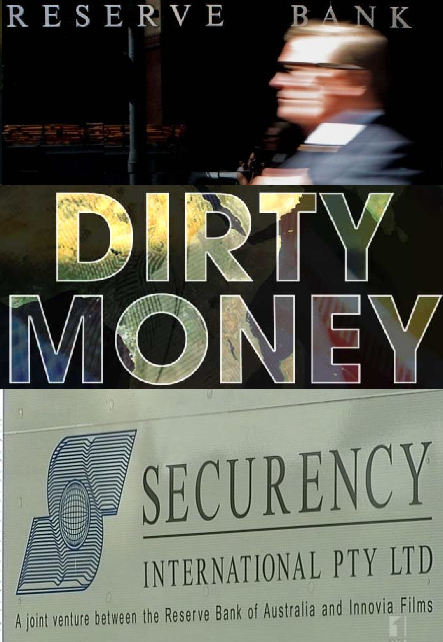 THE CORPORATE sanctioned muck of fraud, bribery, collusion, mutual scrotum and back scratching could not exist without corrupt bedfellows in the national executive elite.

It could not flourish without the rich and powerful and those who aspire to be like them, or without the various regulatory and policing bodies, institutions, the judiciary, the legal system, state and federal governments and people who are prepared to lie before they buy and sell silence — such are their shares and stock in trade.

On Saturday, Australians wake up to yet more explosive revelations in Fairfax publications that, in an ongoing saga, compounds all and more of the above:

The Australian Securities and Investments Commission announced in March that it would not act on a federal police referral to investigate the RBA bank note scandal, despite the AFP and government lawyers finding compelling grounds to do so.

The Saturday Age can reveal that so strong is the evidence of possible corporate malfeasance that prior to referring the matter to ASIC, the federal police considered taking the rare step of getting a special delegation from the Gillard government to investigate corporate law offences.

ASIC's failure to conduct the most basic of investigations into the matter has not only infuriated senior law enforcement sources in Canberra, but left a major part of Australia's worst corporate corruption scandal untouched. It has also sparked questions about whether the intense political sensitivities that could flow from a probe that ensnared top serving and former RBA officials has influenced ASIC's conduct.


It is a ploy of fraudsters, banks and their lawyers and police and others included, to deliberately do the following: misspell a name, incorrectly date a letter, incorrectly address a letter, delay service, fabricate service — as I can attest in my own experiences with the National Australia Bank.

Australians have a right to expect ASIC to act on our behalf.

A senior legal source aware of evidence implicating some of the directors of allegedly corrupt RBA subsidiaries Securency and Note Printing Australia said it was ''very strong'' and included the reckless approval of payments to a suspected corrupt arms dealer and to front companies in known tax havens.

Yesterday The Age revealed that several directors of both companies - including top RBA officials - were told of explicit bribery and corporate corruption concerns in 2007 but chose not to call police.

The article, written by Richard Baker, Nick McKenzie and Maris Beck, is the latest in an outstanding and ongoing investigation that even in its early days should have prompted an immediate response from our government and the authorities — and the mainstream media.

Last year, with a two-part article published in The Age on August 11 entitled 'RBA held evidence of bribery / Who knew what when’, Baker and McKenzie won a Walkley Award for their painstaking work.

On the same night, Wikileaks founder Julian Assange also won a Walkley for the most outstanding services to journalism.

He was in good company.

Baker and McKenzie have led this forensic investigation and both they and The Age are to be congratulated not only for their services to journalism, but also because of their services to the Australian people.

They have done what the Board of the Reserve Bank, the Government, the police and ASIC have all failed to do, have refused to do and that is, to investigate and act on the matter.

But where is everyone? Where are our political guardians? And I don't mean just for today?

Where were they months and years ago, when Baker and McKenzie first held a Securency note to the light to see if it was fair dinkum?

The Age quotes Independent Senator Nick Xenophon as questioning ''the extent ASIC has been blindsided by the fact that these allegations involve subsidiaries of the Reserve Bank''.

''It seems extraordinary that given the seriousness of these allegations and what is at stake here, that not one relevant witness has been interviewed by ASIC,'' Senator Xenophon said. ''This is serious enough to warrant a special taskforce from ASIC.''

Well, I reckon you're on the money, Senator.

But where was Prime Minister Gillard? (Without question I am not referring here to her private sadness and absence from the public stage. Like millions, I empathise so very much with her at this yuck time and wish her and her family great strength and have only kind thoughts, my condolences and no platitudes)

Where was Attorney General Nicola Roxon?

Where is Foreign Minister Bob Carr?

Where was former Greens Leader Bob Brown and where is Christine Milne?

Where is the Leader of the Coalition Tony Abbott? He should be punching the lights out of the Reserve Bank of Australia and ASIC, metaphorically of course.

Where is Bob Carr's jealous rival for the top job?  Julie only has to lose one more shoe (two so far) and he's hoping he'll be a shoe-in. We're talking globe-winning treasurer here, Wayne Swan.

Where's the Commissioner of the Australian Federal Police, Tony Negus?

Well, there you go girls and boys, I've given you the starter pack for Reserve Bank of Australia Investigation 101. Now go forth and multiply, as I tell my students.

Oh, and I think I've spelled the names correctly.

But I know what you're thinking. That I haven't mentioned the Chief of the Reserve Bank of Australia himself, Glenn Stevens.

The fact is, the disgraceful and entrenched misconduct of some sections of the RBA were done in the name of the Australian people. Once again, we have been ill-served.

The moral and political cowardice of ASIC is offensive in the extreme. Who do we turn to when our corporate watchdog appears to have been debarked.

What I want to know is, whose is the tail that wags the watchdog?