Sydney bureau chief Ross Jones gets on the line to Alan Jones in the wake of his sensational interview with Malcolm Turnbull.

Let me start by saying I am in full sympathy with you.

It is infuriating to think Nguyen has taken over from Jones as Australia’s most common surname. I, for one, am pissed off. And rightly so if you ask me. Can you do something about this?

Now I am on the line, and thank you for taking my call, can I also say I thought your interview with Malcolm Turnbull was masterful, just masterful.

You had him smack in the headlights — he refused to take dictation from you! Talk about front.

Malcolm had to say:

"I support the re-prioritised funding of official development assistance."

Now, I don’t know about you, Alan, but where I come from, that’s piss-weak; you had him there mate. He’d never get away with crap like that in the Club.

And the way you reminded him you’d been a rugby coach? That put him in his place. "This is not football," he said.

Mate, we all read the paper from the back and I’ll tell you half the paper is football before you get to the chicks, then Piers and Andrew.

Football is life, isn’t it? So where does this traitor get off?

He’s in bed with that fat commie coal miner; they’re plotting against the best Prime Minister this country had ever had. Remember Juliar? God almighty.

Alan, I love the way you grasped Malcolm’s leadership sword and broke it over your gorgeous knee:

"You have no hope of ever being the leader. You’ve got to get that into your head. No hope ever."

And cripes, accusing you of colluding with Andrew Bolt! Talk about laugh. What have you and Bolt got in common? He’s a writer, and a bloody good one, and you are on radio. Can I venture you are the king of radio? For an old bloke, Andrew looks young, don’t you think?

And he’s on the ball. Even Turnbull said he wouldn’t ‘argue with Andrew Bolt’. Bolt by name, eh?

Malcolm is a girl, mate — you know what I mean? I had real chuckle when you told him you weren’t abusing him. Lefties can’t hack abuse.

But I’ve got to say, Malcolm is good to women and that’s important in this day and age. I mean, he even sent a note to Palmer telling him he ought to apologise to Peta Credlin about, you know, the IVF thing. God, what that woman has been through! What, with her marriage and all. Must be tough.

But is there any possible excuse for Malcolm to hang with the ABC? I for one am sickened by this and I am gratified you agree. As you rightly point out, this is the same ABC that broadcasts the weekly Question and Answer program that religiously has a panel dominated by left-wingers. This is just wrong. I never watch it myself out of principal because, Alan, all I need is you.

Ray is okay but he doesn’t have your voice. And, let’s face it, there is no way you are a bully.

Anyway, as I said, thanks for taking the call. Me and the missus are off on a 2GB Rhine River Cruise next week with a stop-over in London. Maybe I’ll see you there.

For the full transcript of the Jones Turnbull interview, click here.

Apparently Alan Jones was upset this morning after Turnbull ripped him a new one #auspol pic.twitter.com/aw4EvZ9Zg5 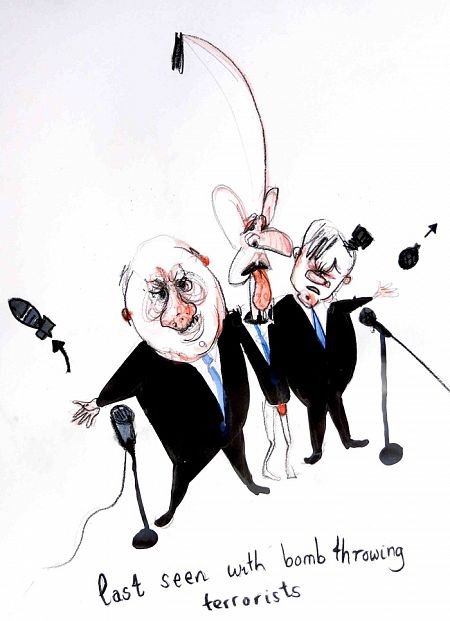 John Graham originals – including the picture above – may be purchased from IA's online store. (See more of John's political art on his Cartoons and Caricatures Facebook page.)