Corpse controversy: Are the bodies of tortured Chinese prisoners being used in Sydney exhibition?

A macabre exhibition has opened in Sydney, but suspicions have been raised as to the origin of its gruesome content, writes Victoria Pressler.

AN EXHIBITION THAT OPENED in Sydney on 14 April is under scrutiny about the origin of the bodies that are being featured. Real Bodies: The Exhibition features around 20 human bodies and over 200 body parts, in an attempt to ‘dig deeper into the beauty of the body, mind and soul than any other exhibition of its kind,’ according to their website. However, after digging deeper into the origins of these bodies, concerns have been raised that the origins of these bodies may be more accurately described as horrific than beautiful.

“There are grave concerns that the bodies are not freely and willingly donated.”

Ms Bryskine went on to explain her fears about the source of the cadavers:

“The origins of these bodies have been questioned and believed to come from China — either death row prisoners, or as suspected by independent investigators, tortured prisoners of conscience.”

In just 8 days you will be able to dig deeper into the beauty of the body, mind and soul across 10 galleries .... come and immerse yourself! From 14 April - Book Now 👉 https://t.co/e9y3BDn13Z pic.twitter.com/n4B8IrCVnn

The organiser of the event, which has already been seen by over 50 million people, Tom Zaller, denies allegations that the bodies could have come from prisoners of conscience, calling them unfounded and offensive. However, there have been concerns raised about other cadaver exhibitions in the past that draw alarming parallels to the current exhibition. In 2014, an exhibit in Canada called Bodies Revealed drew criticism from human-rights group Choose Humanity, which expressed concern that the bodies used were from Chinese prisoners of conscience.

When questioned about the origin of the bodies, Premier Exhibitions, who created the Bodies Revealed exhibit, admitted at the time that they:

“...cannot independently verify that they do not belong to persons executed while incarcerated in Chinese prisons.”

The cadaver trade in China is extremely profitable, with the demand coming from international medical schools and pharmaceutical companies. Sellers are taking advantage of this trade, with some merchants even advertising the bodies and selling them online. One seller appeared on popular Chinese retail platform Taobao asking for 126,500 yuan (AUD $21,000) per cadaver, with a two year warranty included and a full medical history. They would not, however, disclose the origin of the body. 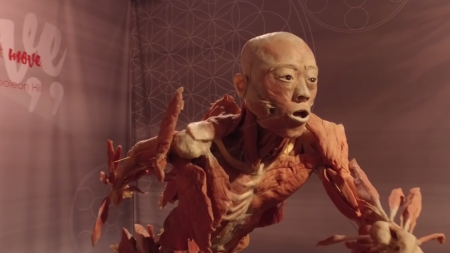 In a disturbing trend that has seen more bodies and body parts being sold, China’s organ transplant waiting list is currently the lowest in the world. The wait time for an organ in China is incredibly short, where a kidney donor may only take a week to find. This figure is startling compared with nations such as Australia, where an organ transplant recipient can wait up to four years for a donor to be found. It wasn’t until the year 2000 that China’s organ transplant industry took off, as the number of liver transplants performed increased tenfold. Six months prior to this, the Chinese government declared Falun Gong, a religion practised by up to 70 million people in 1999, illegal. Soon after the practise of this religion was declared a felony, members began to disappear, with many witness reports stating that those caught were imprisoned and some used for donor transplants.

The bodies for the Sydney exhibition were provided by Dalian Medical University Biology Plantation.

In a statement from Hong Jin Sui, Professor of Anatomy at Dalian Medical University, the specimens were:

“...originally received from the city morgue and then transferred to medical universities in China and ultimately were legally donated to the Dalian Hoffen Bio-technique Laboratory preservation, dissection and exhibition.” 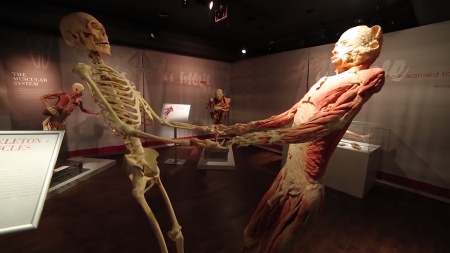 The displays are designed to give us a better understanding of where we came from, but where did these cadavers come from? (Image via YouTube screenshot)

This came as a university student questioned the multitude of available bodies at their university. In an anonymous letter to Minghui.org, the student wrote the following:

Our tiny, amateurish medical college in Changchun somehow has more bodies and organ specimens than Waseda university in Tokyo. I asked the teacher whether these bodies were donated, but the teacher told me not to ask. Later I discovered that in the suburb and district of Changchun there is a corpse processing plant. Today in China, do we really have so many cadavers from voluntary donors, so many that we need corpse plants?

The question is one that no doubt sits uncomfortably with many people. Recently, a group of human rights experts, including lawyers and University of Sydney academics, have joined forces in an open letter to the Australian Federal Government asking them to shut the Sydney exhibit down. The experts questioned how the bodies could have been legally obtained from a morgue, as rules in China dictate that bodies must be unclaimed for 30 days before they can be released, whereas the plastination process must begin two days after death.

In the letter, they said:

It is not possible the bodies were “unclaimed”, as according to regulations and autopsy rules ... bodies can only be declared “unclaimed” after 30 days. The plastination process, which involves the use of silicon, epoxy and other polymer mixtures to replace the fluid in the human body, must occur within 48 hours of death. Therefore, it is not possible to plastinate a corpse that is 30 days old.

Whilst the Australian Federal Government has not made a comment regarding this, several countries, including France and Israel, have banned cadaver exhibitions due to the probability of human rights’ violations.

Victoria Pressler is a freelance writer who grew up in the UK and is currently living in Melbourne. She has a Bachelor's degree in English with Journalism and has a strong interest in human and animal rights.

Corpse controversy: Are the bodies of tortured Chinese prisoners being used in Sydney exhibition?

10 May 2018, 4:30pm A macabre exhibition has opened in Sydney, but suspicions have been raised as to ...
Join the conversation
comments powered by Disqus
News updates