Clive Palmer is rich so we should hear him out

Tempting as it is to dismiss Clive Palmer’s allegations about the environmental movement being a CIA front as the preposterous, demented, ravings of an obviously unsound mind, we shouldn't be too hasty, says JD Lang — after all, he is rich.

I read with deep concern Clive Palmer’s allegations that Greenpeace and the Greens are being funded by that shadowy sponsor of foreign despots, corrupt regimes, and environmental movements everywhere — the CIA.

It is tempting to dismiss these allegations as the fantastical ravings of an obviously unsound mind; the preposterous demented squawks of a man possessed by a feverishly overactive imagination, complete lack of general knowledge, and a pitifully underdeveloped cerebral cortex.

It is tempting to do so; overwhelmingly tempting some might say – while others might say it is just common sense – nonetheless, we should resist this temptation. Resist it with every sinew. Resist it at all costs!

And, by the same token, it may also seem hard for some to not adjudge Palmer’s rant as being merely the bizarre ramblings of another fatcat mining billionaire out to protect his own narrow interests and profit margins, even if it means making ludicrous, outlandish, and obviously false allegations about a fictitious alliance between two groups with almost entirely conflicting aims.

It would be easy – yes, so very easy – to simply dismiss Palmer's claims out of hand like that — but we would be wrong – oh, so wrong – to do so.

Wrong, wrong, wrong — because Clive Palmer is a man of substance. A man of impressive substance. A vast, beefy, ball-shaped, wobbly-jowled, lurching, lolloping man of ever expanding substance. And a rich man. Yes, extremely rich. Let’s not forget for a picosecond how very, very, very, VERY rich he is.

So, if he says the CIA has paid for something, he doesn’t just say it like Joe Bloggs who works at the local bakery or bank. No, in fact, Clive probably owns the local bakery and bank! Instead, he says it in a press conference in front of dozens of journalists, with steadfast conviction, and with hundreds of thousands of crisp hundred dollar bills standing and nodding knowingly behind him, clapping enthusiastically during the appropriate pauses. Consequently, he is much, much, much, more important than you, me or anyone else who may not have a lazy 5 billion attracting interest in his or her local bank (that he probably owns). This means that Clive – and indeed his Western Australian twin, Gina Rinehart – should be listened to intently, in silence, with profound and studious respect — no matter what apparently ridiculous and seemingly stupid comment – or appalling doggerel verse couplet – may be haphazardly lurching or stumbling its way out of their fleshy chicken-fat covered mouths at any particular moment.

Moreover, Clive Palmer is not a man to make rash and unconsidered statements. No. You don't get to be so very, very, very, VERY rich by living in a complete fantasy world of spooks and conspiracies and reds under the bed all looking to take away your vast, vast, fortune (my precious), do you? Of course not.

For instance, this is the man who once claimed that his personal soccer team, Gold Coast United, would go through the entire A-League season undefeated! Even though Gold Coast didn’t meet this expectation – in fact, they didn’t even come close, not even making the finals – still this statement was a technical possibility at the time he made it — proving that not everything Palmer says can simply be dismissed out of hand as the kooky ravings of a barely coherent crackpot.

Of course, Clive’s team has recently been excluded from the A-League by Football Federation Australia. An announcement about FFA chair Frank Lowy being an agent for Mossad is expected at literally any second. 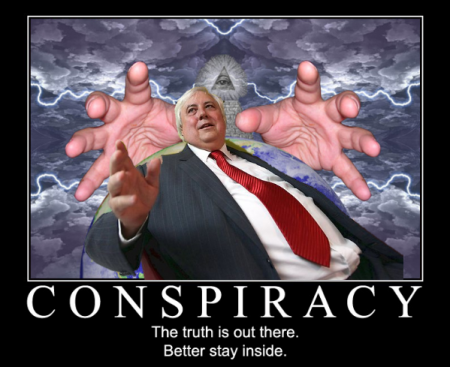 So, even though on the face of it Clive Palmer’s allegations about Greenpeace being a CIA front have that crystal clear ring of arrant stupidity and clutching self-interest about them, we should be wary about just falling over each other crying tears of laughter about these remarks, before summarily discounting them as being quite obviously false and, indeed, rather embarrassing. Clive Palmer is, after all, a miner and miners are used to getting down in the muck and uncovering layers of topsoil, stones and bedrock to get to those elusive nuggets of truth buried deep underground. Well, OK, miners are mostly looking for iron ore or coal or something, not truth, but I’m sure if they found some truth in the ground there somewhere, they wouldn't necessarily be averse to dumping it into the back of one of their oversized trucks — providing they could sell it to China at a reasonable price. Anyway, you get the general point — Clive’s job is to be an uncoverer, and so we shouldn’t laugh at him when he thinks he’s uncoverered something really important.

Yes, Greenpeace and the CIA being secretly in cahoots might sound implausible – and maybe even completely and utterly ridiculous – but I just get the feeling Clive Palmer is onto something here. And anyway, he’s rich, so in my book he deserves the benefit of the doubt.