The Turnbull Government has introduced legislation to enable investment in coal with carbon capture and storage despite the fact that there is just no such thing as "clean coal", reports the Climate Council.

It is not coping with escalating extreme weather, like heatwaves and storms. It is not adequately adapted to 21st century, smart technology.

Australia’s Chief Scientist, Dr Alan Finkel (together with a panel of reviewers) has now released the findings of a review into the future of the National Electricity Market. The 'Finkel Review' finds the electricity system must achieve four key outcomes:

Coal power doesn't meet the above criteria. Yet the Federal Government has introduced legislation to enable the Clean Energy Finance Corporation to invest in coal with carbon capture and storage (CCS).

In addition, some Federal Government MPs are pushing to have coal qualify under the Finkel Review’s proposed Clean Energy Target and for taxpayer funding to build new coal power plants. Australia’s coal-fired power plant fleet is ageing, inefficient and polluting.

The Finkel Review acknowledges that by 2035,

'approximately 68% of the current coal generating plants will have reached 50 years of age.'

1. There is no such thing as “clean” coal

When dug up and burned, coal pollutes the environment and damages our health. Burning coal for electricity emits toxic and carcinogenic substances into our air, water and land, severely impacting on the health of miners, workers and communities. The Australian Academy of Technological Sciences and Engineering  (ATSE) estimated coal’s health impacts cost taxpayers $2.6 billion every year.

Coal, and new coal mines such as the proposed Adani Carmichael mine, pose a serious risk to the environment, public health and the economy.

A new high-efficiency coal plant run on black coal would produce about 80% of the emissions of an equivalent old plant (Figure 1), while renewables (such as wind and solar) emit zero emissions. Coal plants with CCS can result in more emissions than a standard coal plant once this extra extracted oil is burnt. The two coal power plants with CCS currently operating (and the further power plant under construction) all pump their emissions underground to extract more oil. 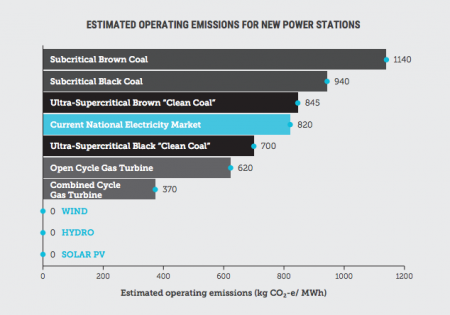 So-called “clean coal” does not help Australia meet its obligations to reduce its economywide emissions 26-28% by 2030 below 2005 levels and will certainly not help Australia be on track for limiting global temperature rise below 2 degrees Celsius.

One of the largest long-term risks to energy security is escalating extreme weather, driven by climate change.

We have seen the impact of extreme weather on power systems over the past year in Australia. In September 2016, an extreme storm knocked down 23 transmission towers in South Australia causing a blackout. New South Wales and Queensland have experienced record-high electricity demand during extreme heatwaves in January and February 2017.

SA blackout: The 'renewables and Labor did it' tale https://t.co/AYEzLr0QXi @IndependentAus More about coal than facts. #auspol #environment

In New South Wales, around 3,000MW of coal and gas capacity was not available when needed in the heatwave. Infrastructure relying on long distances and single massive sources of power, like a coal power plant with a long grid, is more vulnerable to extreme weather than a distributed grid with a number of sources of power.

Cities that have experienced severe damage to their electricity infrastructure from extreme weather, like New York, have diversified the sources and location of power generation. Modern renewable energy means that power can be generated and stored where it is needed. This can reduce risks for critical infrastructure of grid failure.

The Australian grid has been built for coal-fired generation, it must be modernised as new power sources come online. Massive coal fire generation will not be the future. It is simply too expensive, too risky an investment and too polluting. New coal is no more secure than other power plants — these large generators are vulnerable to heatwaves, fires, floods, water supply concerns and mine subsidence.

Power security can be improved by, for example:

New wind and solar plants both in Australia and overseas are cheaper than new coal, gas and nuclear plants. Stockyard Hill Wind Farm will deliver power to the grid at a price of $55 per MWh, compared to new coal potentially costing as much as $203. Bloomberg New Energy Finance finds the cost of new high-efficiency coal plants would range from $134 - 203/MWh, compared to wind ($61-118/MWh) and solar ($78-140/MWh). The cost of coal with CCS would be even higher, at around $352/ MWh.

The cost of new coal power is nearly three times the wholesale cost of electricity recorded last year. These costs eventually get passed on to households and businesses, through electricity bills, which rules out the Federal Government’s proposal of “clean coal” as affordable. New coal power stations are risky for private investors and expensive for energy users.

The Climate Institute calculated that a new coal plant would only get built with a government-guaranteed subsidy of around $27-44 billion because, for example, new coal stations will need electricity prices up to four times higher than today to earn sufficient revenue.

Fossil fuels drive climate change and that is bad news for all us. It means more extreme weather events such as catastrophic bushfires, severe storms and deadly heat waves. Climate change endangers homes, our businesses, communities and us. It even led to an entire state being plunged into darkness when storms in South Australia took out over 20 transmission towers.

This is why many countries around the world (such as Canada, Germany, the UK and China) are moving away from coal. They are shutting down existing coal-fired power stations and embracing renewable energy.

A Climate Institute survey has consistently found that Australians overwhelmingly support renewable energy both in terms of emission reduction and in ideal energy mix. Solar, wind and hydro are the preferred energy sources. Coal is consistently ranked last, behind nuclear.

Building new fossil fuel power plants is expensive, polluting and damaging for community health. Investing in coal would be bucking a global trend of transitioning away from fossil fuels to renewable energy. We need to be preparing for – and indeed joining, facilitating and accelerating – the transition to a zero emissions world. The future is in renewable energy, storage, smart grids and energy efficiency.

This report was originally published on the Climate Council website and has been republished with permission.

Support a clean environment. Subscribe to IA for just $5.