THE LARGE ROOM was dimly illuminated by only two of its fifty or so overhead lights. One shone weakly over the end of a long towel-topped bar, just enough so you could make out the brands on the beer taps; Carlton, New and Stella. A chap stood behind the taps, his features indistinguishable, but wearing a white shirt and black bow tie. On the wall an LED sign dangled from its one remaining screw so that, reading vertically from top to bottom, it read ‘Fantasy Writers Club’. It swung slightly when the barman moved.

Next to the sign, a cracked frame; in it, a yellowing Sydney Morning Telegraph front page, its headline just legible through layers of dust:


EXCLUSIVE - RUDD AND CREAN TO ROLL GILLARD, THE INSIDE STORY.

The other light shone over a corner table, a round melamine affair that could seat six at a pinch. A lone figure sat hunched, as though intimidated by the dark, empty, space around him.

A door opened, admitting a weak shaft of light before it swung shut. A shadowy figure shuffled through the gloom, bulky with the odd gait of a wounded beast. Despite the dim light, the beast appeared blind and approached the illuminated table uncertainly with outstretched hands. The hands came into contact with the hunched man’s head.

"Oh, it's you Phartcher’, said the beast. "That’s a nasty bump you have on your head."

"Fuck off Packerman, you loser."

Packerman slumped in a chair and shouted with weak voice, "triple thanks Mal!"

The barman moved, the sign squeaked. After five or ten minutes a drink arrived.

"Not having Coke with that?’ asked Phartcher.

"What are you alleging, you filthy lying scumbag? I have never drunk Coke! Bet you can’t even prove you were born in Australia. I’ve got sources, mate, and they’ve got documents showing you’re really from PNG. Just look at your hair."

"Yeah? Well my sources tell me that…" A phone rang. 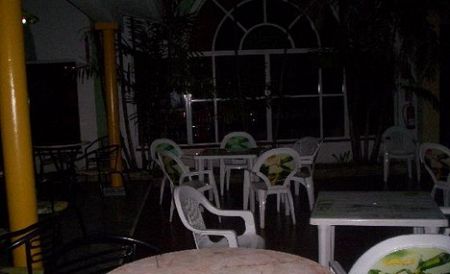 "That was A Bolt," Pharts said by way of explanation, "he’s on his way."

Packerman shook his head at a dim memory. "Jeez, I shouldn’t have had so much Co….A Bolt? Who the fuck’s A Bolt? He anything like A Rod?"

"Sort of, but shorter. And thicker." Pharts was demonstrating thickness by holding his arms out like a shrike drying its wings when his phone rang.

Packerman frowned at an obviously elated Pharts, who fumbled his phone and shouted:

"Hey Mal! Tone’s lost the plot! The front bench’re gonna give him the tap! You’re going to challenge for LOTO!"

"You asinine twat," said Packerman, "he means you’ve been chosen to uphold the glories of Carl Roveism in these dark days, days pitted against that lying scumbag economically illiterate ex-lawyer who hangs out with a hairdresser! Lead the fight!"

"You know Pharts," said Packers, "I love being a social commentator. If I was able, I’d get very excited at the thought of all those people in McDonalds reading my every word, pumping their Big Macs in righteous rage."

"My sources say you didn’t get past year ten."