IN TWO DAYS of 25 Citizens' Jury sessions in Adelaide (on 25-26 June), about nuclear waste importing, there was minimal coverage of the question of ionising radiation and health.

What little there was, was skimpy, superficial and downright deceptive, in 209 pages of transcripts.

There was not one mention of the world's authoritative bodies on the subject — The World Health Organisation, U.S. National Academy of Sciences, Canadian Nuclear Safety Commission or any of the reports on biological effects of ionising radiation.

There was no explanation of the "linear no threshold" (LNT) theory on ionising radiation and health, despite the fact that this theory is the one accepted by all the national and international health bodies, including the Ionising Radiation Safety Institute of Australia who, on this topic, quote the Australian Radiation Protection and Nuclear Safety Agency (ARPANSA). 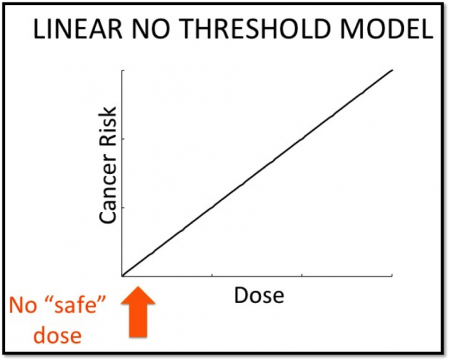 Instead of explaining this basic concept in radiation protection, the slight coverage on radiation and health given to the Jury, was done in a trivial manner as the following examples (listed in the transcript report) illustrate.

"Why didn't the commission report to us the effect of radioactivity in these two [Hiroshima and Nagasaki] populations?"

That's just one example ... There are lots of studies being undertaken ... to look at it from other angles as well ... I would have to say that there's a cloudy area, and that's largely around the impact of low doses of radiation on humans ... You've got others who would argue that actually small amounts of radiation actually has a beneficial effect on your immune systems, but there's certainly no — I would have to say there's no universal agreement at this point.

But there IS universal agreement on the Linear No Threshold theory, as explained by the health bodies named above.

the effects that we're looking at, they are what are known as stochastic effects, they deal with lower doses where you need to do epidemiological studies in order to determine the relationship between radiation and a particular consequence ... outstanding evidence, from Geraldine Thomas ... She gave excellent evidence on this topic and her evidence is very interesting.

Mr Jacobi did not go on to explain any of this evidence, so the jurors were left in the dark here.

However, Professor Geraldine Thomas of the Imperial College London, cited by Jacobi, is well known as a speaker promoting the message that ionising radiation is nothing to worry about. She pops up wherever the nuclear lobby is doing a soft sell and in particular, downplays the health effects of radiation on all species as a result of the Chernobyl nuclear disaster. She also claimed (at an international conference on radiation research in Warsaw in 2011):

Following Fukushima I doubt that there’ll be any rise in thyroid cancers in Japan.

Thomas' views are greatly contested. Screening has shown an abnormal rise in thyroid cancers in Fukushima. Professor Timothy Mousseau has studied the Chernobyl and Fukushima situations extensively, finding ill effects of radiation — including genetic damage and increased mutation rates in many species.

A citizens' jury considering SA's role in the nuclear fuel cycle has kicked off its conversation https://t.co/DaPS7wM0vD @abcnews

Maralinga atomic experiments ... British atomic tests are not linked to this discussion; they’ve got nothing to do with it —very subtle way of linking two completely unrelated issues to bring fear and emotion ... 60,000 people work directly in the UK nuclear industry and in 60 years there has not been one fatality. Neither has there been a fatality in Canada, France, Germany, India and even the U.S. ... Five and a half thousand people we understand die from some level of obesity yet we don’t ban sugar and sugary drinks ... education over hysteria.

For Aboriginal people the past really does shape the present and the future. Significant events like happened at Maralinga very much become a part of that ... that's affected people all the way to the present as there's people dying young, which shouldn't be happening ... Aboriginal people — "We don't want that stuff here because we've seen what it does to people."

An investigation in the U.S. last year, revealed at least 33,480 American nuclear workers died as a result of their radiation exposure. International Agency for Research on Cancer, World Health Organisation also reported on nuclear workers' leukaemia.

Oh look a nuclear waste dump! Is it OK if we bury it in your back yard because SA does not want it in ours. pic.twitter.com/5e1PltwA6N

Jason Kuchel, Chief Executive South Australian Chamber of Mines and Energy. At last, the fun part about bananas and chocolate. He provided these to jurors, as some sort of evidence of the benignness of ionising radiation (p 117):

I took the opportunity during the break to put some bananas and some chocolates on the tables ... you will get to see the point of that as we go through. ... [the risks of] getting an x-ray, flying in a plane or even eating a banana. At the Onkalo waste repository in Finland, the worst case radiation dose if someone were to stand on top of the facility for a whole year and there was a defective package, the equivalent radiation would be equal to eating one bite of a banana.

As the facility is not yet accepting radioactive waste, all that hardly matters. And that was all from Mr Kuchel.

Associate Professor Michael Penniment, Director Royal Adelaide Hospital, went on at length about the present storage of radioactive materials in hospitals and so on in Adelaide. He took a long time to go near the question of health effects of low level radiation but he finally got to talking about radioactive sources (p 124):

It may be that you may not want to avoid them anyway ... I got the banana association straight up. I didn't get the Lindt one [the reference is to the Lindt chocolate factory, which is quite near a nuclear power plant]; I didn't see that coming. But certainly there's some radioactive potassium.

An absolutely crazy concept, these people in the Royal commission could almost be labelled nuclear sociopaths https://t.co/clttm03WVn

However, later in the Q and A section, Penniment did return to that subject ( p.132):

I saw an article by ... David Webb ... in the follow-up to Chernobyl ... there were 28 deaths, and those were the radiation workers that were sent in to clean up the initial spill ... And then there was something of the order of 1500 people that died from suicide because of their concerns about radiation, which he described as really the fallacy of radiation, that those people were so worried, and beyond that nobody has died form that incident.

There's even data that suggests, and it's reassuring to me, there was data from the British Radiology Association a number of years ago that low level exposure that's above what we've set as the community limit actually may have an improvement in health in terms of what's called radiation hormesis. The study of radiation workers in the 50s and 60s where controls aren't as tight as 30 they are now suggests that it may actually have a very low level exposure to radiation but above what we would deem safe might actually have an improvement in health.

Professor Penniment has taken his information from the World Nuclear News. As well as the sources noted above, eminent Russian scientists have put the death toll at 985,000. The most recent study TORCH-2016, an independent scientific evaluation of the health-related effects of the Chernobyl nuclear disaster, explains the difficulty in getting an accurate estimate but suggests a conservative estimate of 30,000.

As explained above, in rebutting Nigel McBride.

On radioactivity of bananas:

Bananas, brazil nuts and some other foods contain radioactive potassium-40 — but in extremely low doses. Potassium-40 in bananas has a specific activity of 71 ten millionths of a curie per gram. Compare that to the 88 curies per gram for Cesium-137. This is like comparing a stick of dynamite to an atomic bomb. Our bodies manage the ingested Potassium 40, so that after eating bananas, the excess is quickly excreted and the body's Potassium-40 level remains unchanged.

The radioactive isotopes that come from nuclear fission (such as strontium -90, cesium -137 and iodine 131) were unknown in nature before atomic fission: our bodies are not adapted to them. And as well as being far more radioactive that Potassium -40, they can accumulate in the body.

I had hoped for something sensible to come out of these Citizens' Juries. That doesn't look like happening if the juries continue to be fed this kind of nonsense.

You can sign the change.org petition to Prime Minister Turnbull, 'No Nuclear Waste Dump in South Australia' here.

Read more about the history behind the Coalition's nuclear waste dump plan here.

Why are we even wasting money to consider making Aus the toilet for the world's toxic nuclear waste?https://t.co/PPpKhbGi3t @IndependentAus

Nuclear ‘Citizens Jury’ will be a farce if it relies solely on that biased South Australian Royal Commission https://t.co/eo2sDBoZLj