Campbell Newman and the rule of law

By Alex McKean | 26 June 2014, 8:00am | comments |
Premier Campbell Newman either does not understand the principles of the separation of powers, or doesn't think they apply in Queensland, writes barrister Alex McKean.

impunity ɪmˈpjuːnɪti/ (noun): exemption from punishment or freedom from the injurious consequences of an action.

There is a disturbing pattern to the conduct of the Newman Government in Queensland — it appears to be either ignorant of fundamental principles of the rule of law or, being aware of them, is prepared to ignore those principles.

There can sometimes be more heat than light generated in discussions of the day to day maneuvering of a government. This article will attempt to shed some light on the principles that appear to be under threat in Queensland today.

This is important because, simply put, the principles which have been developed are primarily about the protection of the ordinary person. These are not arcane, dusty rules designed to protect elites from criticism or attack. They are hard fought and hard won protections for citizens against abuses of power by their rulers. They are just as, if not more, relevant today as they were, hundreds of years ago.

The first, and, possibly, the most important, of the principles is the separation of powers. This is the principle that the executive, legislative and judicial arms of government, each with its own functions, should be separate from each other.

A government with a functioning separation of powers is one where the executive – the premier and ministers in Queensland's case – proposes legislation and administers government departments; the legislature scrutinises and votes on proposed legislation; and the judiciary applies the laws made by the legislature. The judiciary does this, principally, by exercising the judicial functions of determining cases between litigants, including the sentencing of offenders.

The separation between the executive and legislature is not very great, particularly, in Queensland today. This is because there is no Upper House to review legislation passed by the massive majority of votes controlled by the Premier and his ministers. Dissent within the massive majority held by the LNP in the legislature has in this Government been met with bullying and expulsion.

The more important separation exists between, on the one hand, the judicial arm, and the executive and legislature on the other.

The decision may involve taxation, social security, the use of our properties, or our neighbour’s use of their property. Some of us may be sued by the government for money we do not owe.

We do not imagine that, individually, we will be personally accused of a crime, including a crime that we did not commit. But it could happen. What is likely is that someone close to us – a child, a sibling, a cousin, a close friend, or someone we know well from tuckshop at school or the children’s footy club – will be accused of a crime.

We are social beings and we live connected lives. At some time, for each of us – as an individual – the concept of a fair trial before an impartial court, staffed by a judge fearlessly independent of the government of the day, will be personally important.

For these reasons, it is impossible to overstate how vital it is that the judicial arm of government is independent of the government of the day.

There are a number of indications that the Newman Government is, if not positively hostile towards, then certainly ignorant of, the importance of judicial independence.

As with Joh Bjelke-Petersen before him, Mr. Newman appears to have a very limited understanding of the separation of powers, dismissing the fundamental principle of our democracy as ‘more of an American thing’.

Mr Newman has said that judges should recognise that the community requires protection and act accordingly. He has claimed that his comments reflect what the people of Queensland are thinking and saying.

The Premier’s central thesis appears to be that the judiciary and lawyers should comply with his legislative program of harsh penalties and the stripping away of rights because the legal system has, somehow, been failing Queenslanders.

If that were true, it is curious that the person who has been at the head of this failed system for the past 16 years has just been handed the top job of Governor by Premier Newman.

In October last year, Mr Newman said that critics of his bikie and sex offender laws, including several retired judges, lived in ivory towers and did not understand that

"Queenslanders have had enough."

No evidence has been provided in support of this assertion. It is to be hoped the Premier is not divining the public mood on the basis of the paid LNP trolls found on his poorly managed Facebook page.

Mr Newman’s hostility toward judges has been demonstrated by some of the overblown rhetoric he has used. Critics of Newman’s law and order agenda have, for instance, been subject to strident abuse from the Premier.

When retired Supreme Court Justice Richard Chesterman criticised laws designed to bypass the courts and give the Attorney-General the power to keep sex offenders in jail, forever, Newman, the very next day, labelled critics of the law

The rhetoric has been ratcheted up in recent times, with the appointment of Chief Magistrate Tim Carmody QC to the role of Chief Justice of Queensland.

It has been revealed that Premier Newman had the final say over who would be appointed to the top job at the Supreme Court. More disturbing are the revelations that no-one but the Premier supported Judge Carmody’s appointment and that Mr Newman only decided on Judge Carmody after public criticism from senior legal figures.

Madonna King gave the inside running in the Brisbane Times:

Justice John Byrne, who is the Supreme Court’s senior judge administrator and senior barrister Bob Bain, QC, were also considered, along with Justice Hugh Fraser from the Court of Appeal.

But it was Justice Jackson who stood out in many legal, judicial and political minds as the best candidate and sources say Mr Newman, who had wanted Justice Carmody all along, “seemed to be won over’’ shortly before the appointment was announced.

But at the last moment - and after former solicitor-general Walter Sofronoff (an ally-turned-critic of the Newman Government) scoffed at Justice Carmody’s ability to perform the role – Mr Newman switched back to Justice Carmody.

Premier Newman has talked up the fact that Judge Carmody is an ex-police officer.

These comments have been reinforced by the secretary of the Queensland Police Union, Ian Leavers, who highlighted that fact and said

"Tim Carmody is an excellent choice for chief justice as he has a deep and genuine understanding of community expectations."

The Attorney-General has gone to ground, refusing to answer questions about the appointment process, in particular, about the allegations that his former chief-of-staff made threats to a member of the Bar Council, that the Bar Association would lose the statutory authority to issue practising certificates.

In Queensland, judges take an oath of office which says, in part:

‘I will at all times and in all things do equal justice to all persons and discharge the duties and responsibilities of the office according to law to the best of my knowledge and ability without fear, favour or affection.’

If judges were to bend to the will of the government and begin dishing out harsher sentences on the basis of the Newman, Bleijie and Ian Leavers’ perception of what the punter in the street wants, they would, therefore, be in breach of their oath of office.

The Queensland public are being asked to believe that the critics of the appointment of Judge Carmody are somehow suffering from sour grapes, or that the "the old boys club" is offended that a former meat-worker has scored the job.

This spurious argument insults the intelligence of the electorate, the people who benefit from power being divided between different arms of government.

Rather than address the important criticisms of the flawed appointment process –including the allegations of politically inspired leaks of confidential by Mr Bleijie or people close to him – Mr Newman’s strategic communications adviser, Mr Lee Anderson,  has reached for his favourite tool, prejudice.

It would be superfluous to point out that Mr Newman, himself, attended one of the country’s most prestigious private schools in Launceston, grew up in the privileged atmosphere created by both his parents being professional politicians, before  marrying an heiress.

These are not reasons to criticize Mr Newman’s government.

Mr Newman’s willful disregard for the fundamental principles of democracy is sufficient cause for criticism. 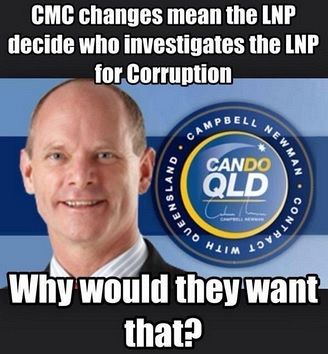 Mr Newman and Mr Bleijie are not satisfied with the share of power usually allocated to the executive arm of government in a democratic society. They have taken radical steps to control any body which might have the ability to scrutinise their mode of exercising power, most notably, until these recent events, the Crime and Misconduct Commission.

It is not good enough to say the people can pass judgment on this Government when the election is finally called. The checks and balances that are essential to our system of government are there because elections – every three years – are not, in themselves, a sufficient check upon rampant power.

Neither is it a bar to all debate to say that the hand of the vice-regal representative  has signed a piece of paper.

Queensland deserves an executive that comprehends and respects fundamental principles of democracy and justice and does not abuse for their own selfish ends simply because they can. 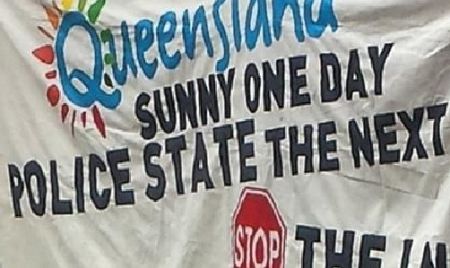