With hundreds of firefighters battling devastating blazes in Perth and dozens of houses being razed, Captain Graham Bates looks at how community fire refuges and better house design can save lives during bushfires.

MOST AUSTRALIANS ARE PROUD to live in the lucky or clever country.

We have faced many disasters in our short history, including war, drought, bushfire, economic depression, floods and cyclones. These disasters cost us blood, sweat, tears, heartache, money and beautiful natural assets like our flora and fauna. We must analyse, adapt and evolve if we plan to survive whatever nature serves up to us.

Casuarina High School in the Northern Territory was rebuilt to cyclone building code standards after Cyclone Tracy in 1974: 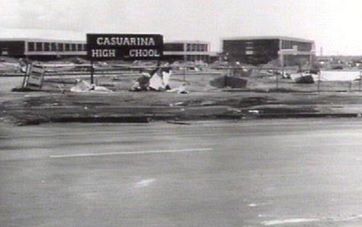 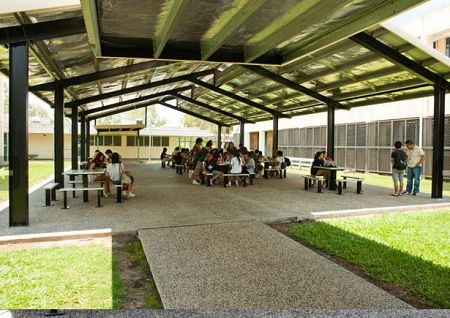 The Building the Education Revolution (BER) scheme could upgrade new halls and gymnasiums with outdoor sprinkler systems & fire-resistant technologies. Now, as part of the Stay or Go Policy, residents & visitors must have somewhere to Go to during catastrophic fire conditions.

This idea can be adapted to harden homes and public buildings in Southern Australia against bushfire.

‘The royal commission recommended that community refuges be designated in high-risk areas and, in October 2011, the decision to build the state’s [Victoria’s] first official fire refuge in the region was announced.’

Public buildings such as the Winmalee Public Primary School in the NSW Blue Mountains could be upgraded as public bushfire shelters: 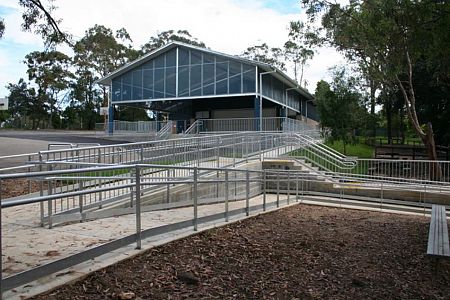 Other buildings, such as libraries, hospitals, health centres and schools in high-risk bushfire areas may also be upgraded to provide community refuges, just as they are in Northern Australia.

Such refuges, however, will only be located in sizable towns. Residents wishing to use these public shelters will need to plan early. Roads may be already be blocked or closed by thick smoke haze. Residents fleeing from their homes may be caught in the open, leaving them without any protection whatsoever.

After Black Saturday, there has been widespread consensus that simply transplanting standard suburban homes into the bush is fraught with danger.

There are now new building codes and standards available for residents wishing to enhance survivability.

With the release of a guide for safely retrofitting your home for better bushfire protection by the Victorian Country Fire Authority (CFA), homeowners have a starting point to enhance survivability: 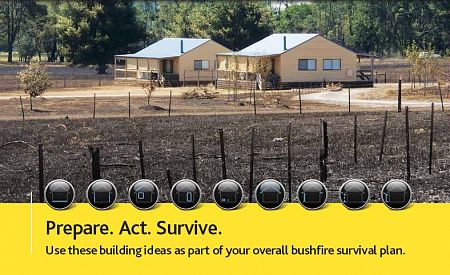 This retrofitting guide is based on Australian Standard 3959 (AS-3959) and provides details for every homeowner wanting to upgrade their homes.

The Victorian CFA guide bases fire safety assessment on the Bushfire Attack Level (BAL) that they home could face and this information is correlated on page 6 of the guide: 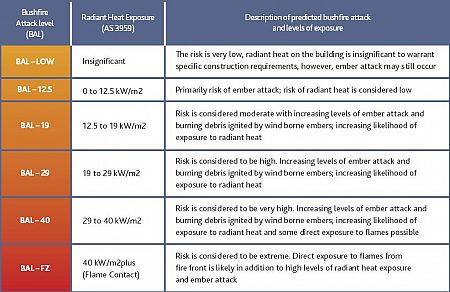 The NSW Rural Fire Service also provides a guide for local residents and this table below illustrates corrective protective measures that can be used, based on risk:

Note that mesh protection over windows and doors resists ember attack and flying debris from the high winds normally associated with catastrophic fire days. These new standards are a direct result of the Black Saturday Royal Commission recommendations.

The Commission found that safety recommendations people had been provided with before Black Saturday were often tragically ineffective and frequently just plain wrong:

‘The most shocking fact about Black Saturday 2009 is that people died where they thought they were safest, where they were told they would be safest. Of the 173 people killed on Black Saturday, two-thirds died in their own homes. Of those, a quarter died sheltering in the bath.'

Individual homeowners can also form ‘neighbourhood watch’  style groups with the aim of helping one another in emergencies.

Despite this appalling human tragedy, survivors like Douglas Walter of the 'Taggerty Heights Dads Army', in sworn testimony to the 2009 Black Saturday Bushfires Royal Commission, provided a comprehensive insight into how they saved their homes and lives:

“On the night of 7 February 2009 and the morning of 8 February 2009, we defended our property against the major fire front which attacked us from two sides, and in the following three weeks continued to defend our property and several neighbouring properties against persisting spot fires, some big, some smaller. Although our property was burnt along its entire length and breadth, we saved our house and both our sheds. We were well prepared, well equipped and had a great deal of luck.”

Loss of power and communications

Many people take electricity, radio and television communications for granted, however, these are usually the first elements of ‘civilization’ that fail in disasters.

“That was the last I heard before we lost electrical power and as a consequence our mains radio. I did have a battery back up radio but unfortunately, it did not get any reception. I think that we would have lost power between approximately 4.00pm and 5.00pm. Shortly after that our mobile phone and land line telephone services both failed.”

“At approximately 4.30am in the morning I saw flashing red and white lights coming through the smoke up Knafl Road. The cavalry had arrived; it was the most euphoric feeling I've ever had in my life. The cavalry was a New South Wales CFA unit that was lost. …. The captain told me that they had no maps, no briefing and no idea where they were supposed to be. They were going to drive up a one-way bush track which would have been extremely dangerous for them if there had been a flare up in the area. The captain said to me, "the first casualty in this crisis has been communication".

If the failure of local communications was bad, reported failures of the Incident Control Centres at the district level were even more serious, according to Walter:

“It is one of the most haunting aspects of the tragedy – the weird official paralysis which meant that warnings weren’t given to communities known to be in the path of the firestorm. In one case an accurate warning was not issued by the Kilmore Incident Control Centre, or ICC, because the fax machine was not operating. It was not uploaded to the CFA website either.”

The Integrated Emergency Control Centre in Melbourne prepared accurate and timely early warnings, yet critical communications failed at this level too:

“Specific warnings were drafted and ready to be sent out several hours before deaths occurred. Kevin Tolhurst’s fire-mapping team in the Integrated Emergency Control Centre produced predictive maps of the fire before 1 pm, but they were not issued.”

Robert Manne analysed the evidence presented to the Royal Commission and reported that communication failures led directly to Kinglake deaths:

This lack of warning on the radio or the CFA website became more and more perplexing. As news seeped out about the events of 7 February, it became clear that roadblocks had been quietly put in place by the Victorian Police in the region of attack, well before the fire arrived.

Most tragically, by mid-afternoon near Kinglake roadblocks were preventing traffic passing in either direction along the Kinglake–Whittlesea Road. Police ordered several people to return to their homes in Pine Ridge Road. All perished shortly after. Without reasonably precise official pre-knowledge of where the fires were likely to hit, how could the erection of these roadblocks be explained?

The widespread devastation and death toll has also generated a significant rethink in home design and construction in bushfire prone areas.

Perhaps these ideas evolved from Australian towns such as this home in Coober Pedy, where summer temperatures range between 35oC and 45oC in the shade:

Architects are already incorporating this style of design for maximising home-owner protection. Homes are built with doors and windows are oriented away from the north-west to southwest quadrants — the directions where lethal fires traditionally originate:

Research into new housing designs with significant resistance to bushfires has already borne fruit, with concrete homes available for people wishing to rebuild from scratch.

In one example of new home design, the Phelan family spent 3 years researching bushfire resistant homes. The results of this research ‒ the family home ‒ won the 2013 Victorian residential builder of the year award: 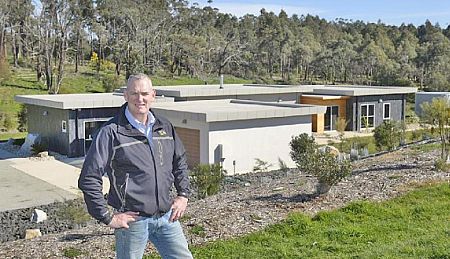 In another example, an existing home has been retrofitted with Metal water pipes attached to the eaves or roof edge, allowing a continuous & drenching water spray to protect the home: 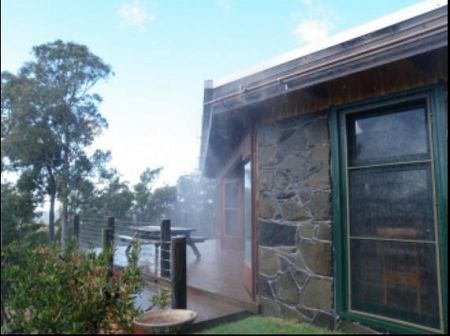 In this you-tube video, courtesy of the Victorian CFA TV during Black Saturday 2009, shows how a similar system saved a home:

In Part 1, the focus was on new equipment and tactics to protect fire-fighters and enhance their combat capabilities:

‘Ash Wednesday, which was like Black Friday in intensity if not in range, confronted the modern firefighting community with the limits of its capacity and technology. It also brought tragedy.
Seventeen firefighters died that day, most of them next to their well-equipped tankers on a forest road in Upper Beaconsfield when the wind changed and the firestorm swept over them. The experience forced changes in firefighting strategies and philosophies. How to save firefighters from sacrificing themselves?’

In Part 2, the focus was on defence-in-depth strategies used to slow, weaken and give critical time for deploying extra fire-fighting assets into the high-risk areas to protect lives.

The deployment of armoured strike teams (AST) is only a fraction of the overall strategy.

Community refuges, local ‘neighbourhood emergency’ groups and individual responsibility for family safety must also be a priority. Especially in major conflagrations when there is no guarantee that a fire-fighting crew will be despatched to every street.

The construction of more fire-resistant homes is also vital.

The internet revolution enables access to modern bushfire survival experiences. Most people can now gather the latest safety information for their fire plans to enhance survival. Local fire-fighting authorities and scientists provide valuable research and resources to keep everyone aware and up to date with recent developments.

They too live in our communities and are more than willing to help. Adding all of these individual intelligence and operational elements into the bushfire strategy mix creates a survival ‘synergy.’

It continues in the modern Australian Army today.