Amnesty International has identified a pattern of attacks by Iraqi forces and the U.S.-led coalition backing them that violates international humanitarian law and may amount to war crimes, writes Kellie Tranter.

IN RESPONSE to criticisms from Amnesty International that Iraqi and U.S.-led coalition military forces carried out “disproportionate” and unlawful attacks to take back Mosul, a senior British commander, Major General Rupert Jones, said recently that it was "naive" to think a city such as Mosul, with a population of 1.75 million, could be liberated without any civilian casualties while fighting an enemy that “lacks all humanity”.

That pragmatic approach is what our government would have us accept in relation to our involvement in Iraq until now.

In a move calculated to minimise public and media interest – and hence impact – at midnight on 29 September 2017 (immediately before the Labour Day long weekend and Saturday’s AFL grand final) the Australian Defence Force quietly released details of its involvement in two fatal incidents this year in Mosul: one on March 30 and another on June 7. Amnesty International Australia rightly criticised the timing of the announcement.

On 30 September 2017, Fairfax Media reported on this incident, stating that the

... first error occurred as coalition forces supporting the Iraqi army on the ground were moving through west Mosul clearing the territory street-by-street when they identified enemy fighters about 300 metres away.

Chief of Joint Operations Vice-Admiral David Johnston said the group was "positively identified as a group of Daesh fighters, and based on that information, an airstrike was authorised and tragically, seven civilians were unintentionally killed or injured in that strike".

'... involves a six-step checklist where, if each threshold question is able to be answered, the legal approval for an airstrike can proceed quickly.’

The incident was "self-referred" to Operation Inherent Resolve for review.

Ironically, on 14 March 2017, 15 days before this fatal incident, a story aired on the ABC 7.30 raised questions about the Australian Defence Force's tracking of suspected civilian casualties from air strikes.

In that report, Australia was described as one of the least transparent military coalition members and, in a response to an FOI request I issued, Defence confirmed that it

'... does not specifically collect authoritative (and therefore accurate) data on enemy and/or civilian casualties in either Iraq or Syria and certainly does not track such statistics.'

On 1 May, Human Rights Watch sent a letter to the Minister of Defence calling for the Government to improve the transparency of its operations and strike reporting. On the very next day, the ADF announced it would start to publish fortnightly reports on air strikes it carries out in Syria and Iraq. Unfortunately, it was found that those reports only described in general terms the location and targets. on 22 May 2017, Human Rights Watch called for the fortnightly reports also to detail instances in which Defence have investigated reports of civilian casualties, the outcome of these investigations and to what extent compensatory or punitive actions have been taken. So far, these calls have gone unheeded.

The concerns expressed by Human Rights Watch clearly are warranted when one examines the ADF report published on 20 June 2017 concerning Operation OKRA – ADF Airstrikes for the period 2-15 June 2017. This period covers the second fatal incident on 7 June 2017.

The Australian newspaper reported on 30 September 2017 that a child was killed in this incident:

In the June incident, Iraqi Security Forces were in a gun battle with Islamic State militants about 20 metres away and found themselves "pinned down", Vice Admiral Johnston said.

A pair of Australian Super Hornets were nearby and were called in to provide air back up, following normal targeting procedures.

"It was a residential building, but it was assessed a legitimate target," he said.

A single weapon - a GPS guided bomb - was dropped on the front of the building ....

"A civilian was either seriously injured or killed as a result of that strike," Vice Admiral Johnston said.

"It was a child carried out." 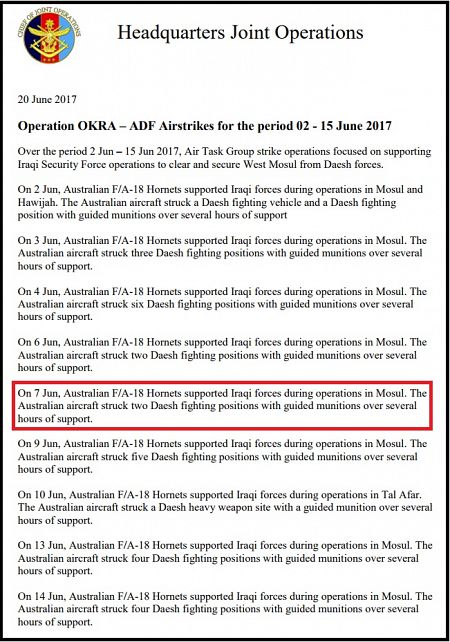 The demonstrable inadequacy and opacity of the fortnightly reports is one reason I issued a further FOI request for the GPS coordinates of each target, to enable people more accurately to assess whether Australian aircraft may have been involved in civilian casualty incidents and, perhaps, also to gain some insight into whether the targeting procedures were working. The ADF was not prepared to release that information. It seemed to me that GPS coordinates became historical data once bombs were dropped, so one wonders whether they are embarrassed about what they’ve bombed or what "collateral damage" they’ve caused.

In fact, in its July 2017 report '“At Any Cost”: The Civilian Catastrophe in West Mosul, Iraq’, Amnesty International identified a pattern of attacks by Iraqi forces and the U.S.-led coalition backing them that violated international humanitarian law and may amount to war crimes.

'Even in attacks that seem to have struck their intended military target, the use of unsuitable weapons or failure to take other necessary precautions resulted in needless loss of civilian lives and in some cases appears to have constituted disproportionate attacks.'

‘If military planners were unaware of the likely civilian toll of the west Mosul operation before it began, it would have become evident after the first weeks of the operation. It was pro-government soldiers, after all, who assisted in countless front-line rescues, digging bodies out of collapsed buildings, separating the injured from the dead and arranging the transport of thousands to medical facilities nearby. Despite this, pro-government forces failed to adequately adapt their tactics in order to effectively protect civilians. They continued to rely upon imprecise, explosive weapons, ignoring the ever-growing toll of civilian death and injuries. In such a densely populated urban environment, military planners should have taken extra care in targeting and their choice of weapons to ensure that attacks were not unlawful.’

At Any Cost: The Civilian Catastrophe in West Mosul, Iraq | Amnesty International https://t.co/v2u9HeXZfy

Defence's publication of fortnightly reports, inadequate as they are, is a first step in the right direction. Rather than relying on simple pragmatic puffery, devoid of factual content – a la Major General Jones – they at least provide some information. However, they still fall a long way short in terms of their non-disclosure of what has become historical fact by the time they are published, and also of information, including their own investigations, that might permit "outsiders" to examine the processes and procedures actually applied in the course of such lethal exercises.

Our country has been responsible for killing at least two children. They deserved to live. What would the distraught families of the victims make of the bipartisan silence from our politicians in relation to the loss of their precious loved ones? Would that silence be so deafening if the victims were children or grandchildren of Australian politicians?