ON WHITE BALLOON DAY 2014, September 7, an event meaningful to me because it raises awareness for child sex assault victims, the main perpetrator of my childhood abuse, Antony Kidman, died suddenly in Singapore.

Yesterday, he had his funeral.

Kidman was, I allege, part of a Sydney-based paedophile ring of which I was a victim up until the age of 15.

What is undisputed is that, at the time of his death, Kidman was under investigation by the NSW Health Care Complaints Commission (HCCC), the Psychology Council of NSW and, presumably, the Royal Commission into Institutional Responses to Child Abuse, as well as the police.

Since 1986, I have reported Kidman’s crimes to health professionals — none of whom adhered to mandatory reporting legislation, until 2008.

In 2008, I reported Kidman’s involvement in a Sydney based paedophile ring to the NSW Police, specifically Justin Hadley, who is currently based at the Dee-Why station.

In 2013, I formally reported Kidman as a perpetrator of child abuse to the Royal Commission at a private hearing in Brisbane.

Later in 2013, I made an application to the NSW Victims of Crime, naming Kidman and other perpetrators.

NSW Victims of Crime used subpoenaed medical and other documents (dating back to over 20 years) to determine on the balance of probabilities that I was, indeed, a victim of crime. 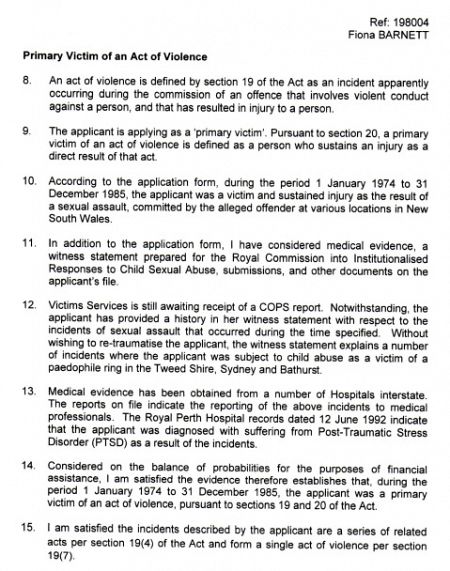 On 7 August 2014, at the suggestion of my NSW Victims of Crime appointed psychologist, I notified against Kidman to AHPRA (Australian Health Practitioners Regulation Agency) and the HCCC.

The HCCC and then the Psychology Council of NSW notified me they were investigating my complaint against Kidman. 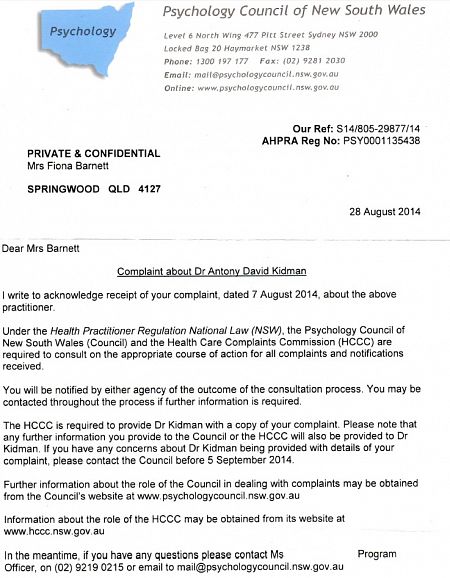 Just over a month later, Kidman is dead.

I am disappointed by Kidman’s sudden death which robs me of an official investigation into his crimes, but I am relieved that he is no longer in a position to harm other children.

I penned my original response to the news of Kidman’s death on the day he died, but before this could be published on IA my article was leaked and a distorted version of my testimony went viral, resulting in numerous media inquiries.

For the record, I did not author the news stories and, although I was quoted in them, I was not interviewed.

As a child abuse whistleblower my priority in coming forward is the wellbeing of my fellow victims. I would like them to realise they are not alone and that their pain is survivable.

I encourage victims of child abuse to speak to officers at their local Police station or report their experiences to Crime Stoppers on 1800 333 00.

EDITOR’S NOTE: This piece has been published because Independent Australia believes child abuse to be a heinous crime and one that should never be hushed up. We believe victims of this crime should be encouraged to speak out. IA does not and cannot verify the accuracy of the claims made in this story as they involve alleged wrongs done to Fiona many years ago. However, these allegations are supported in their entirety by signed statutory declarations. In addition, Fiona has been tested extensively and has been declared to be not only sane, but also, as mentioned above, a victim of crime with reference to these specific allegations. 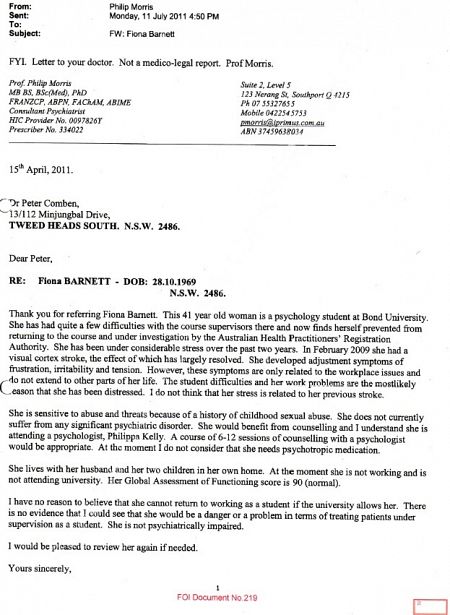 If Fiona Barnett’s claims are, in fact, false we recommend she be prosecuted to the full extent of the law under the Oaths Act 1867. We encourage people with information that is able to verify or disprove Fiona’s claims to contact IA.

And if you are a victim of child abuse where the perpetrator still walks free, please also contact IA. We want to hear from you.