Anthony Foster: A colossus between sex abuse victims and the church

THE HEROIC ANTHONY FOSTER IS DEAD and if ever an atheist deserved sainthood and everlasting peace in a heaven imagined or real, it was he.

Certainly, part of his life was hell on earth.

Tragically, the consequences of a fall and subsequent stroke led to his death, but he has bequeathed us a legacy of triumphs and taught us that courage is without jealousy or self-aggrandisement and can be shared and nurtured.

For decades Anthony and his beloved Chrissie have fought for justice, not only for their two daughters who, as little girls, were repeatedly raped by a Catholic priest while attending a Catholic school, but also for the thousands of other victims/survivors of industrial strength child sex abuse, perpetrated by the church's crack SAS (Sexual Abuse Squad) army of career paedophiles.

Next, we pay tribute to the Australian who should have got saturation media coverage over  the weekend..Anthony Foster. @BreakfastNews pic.twitter.com/WWN04MbxLQ

Within the patriarchal and autocratic strictures of the Catholic Church, they operated with impunity, sanction and brazen collusion of its hierarchy and obliging elite.

Some within the church's executive acted as mere booking agents for their Club Ped members and, when crimes became known within the community, they merely despatched their predator brothers to fresh culling grounds to prey upon even more unsuspecting virginal innocents and families.

Some also participated in these crimes against children and like jihadists do, did so in the name of their God — "for God's sake", as some children were told.

Children were anally and vaginally raped with crucifixes and upon church altars, or wherever two or three were gathered in His sullied name.

Without Foster's steely personal strength and courage, the Royal Commission into Institutional Responses to Child Sexual Abuse and the many gruelling and faltering steps leading up to it on that long, sometimes desolate road – including the preceding Victorian Parliamentary Inquiry called by then Premier Ted Baillieu – may never have eventuated.

It is a testimony to this extraordinary achievement alone that Victoria's Premier Daniel Andrews, surely on behalf of a grateful nation, announced Chrissie and family had accepted a state funeral, the date of which will soon be announced.

Also on Saturday, on behalf of the Royal Commission and team, Justice Peter McClellan issued this statement: 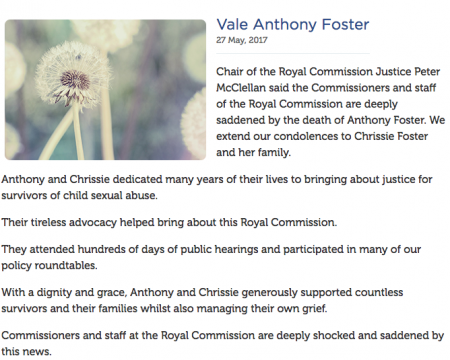 Anthony Foster was the man most feared by Cardinal George Pell. He was Pell's nemesis.

Anthony Foster was the antithesis of everything that George Pell knelt for in terms of caring for survivors.

He would not and could not walk away from his conscience or the heavy responsibilities of fighting for his immediate family, and the wider human family who had been so violated first by paedophiles, and then the ruthless corporate and corrupt machinery that protected the church's "brand".

As I struggle to be worthy of contributing to his memory, the nearest character in literature who comes close to my thoughts of Anthony Foster is Harper Lee's Atticus Finch in the profound To Kill a Mockingbird.

ANTHONY FOSTER WAS OUR OWN ATTICUS FINCH

Anthony was our own Atticus Finch and no copy of anyone's hero. He went against his own tribe and the tides of opinion and the opinionated.

He was a profoundly erudite advocate and speaker and one of the few people who fully understood the sly capabilities and underhand strategics of the church.

His public statements so often derailed the artifice, platitudes, spin and lies that have come to dominate and vex the squalid cover-ups and expose the church for its victim-blaming and overarching concern for its reputation before the well-being of victims and survivors, their families and friends.

He was unafraid to talk truth to power.

For those of us who have campaigned, written articles and conducted interviews through two centuries for justice for victims – at times struggling to get stories published in media outlets intimidated by the legal wrath so often executed by a church unused to being challenged – Anthony and Chrissie Foster were always available, day or night, and for local and community media as well.

'He did tell me once, it helped sustain him, to keep him this side of madness and grief.'

Anthony was always willing to take the hits for victims and survivors while also encouraging them to find their own voice in the knowledge that truth finds the real eloquence in words.

So often he stood in the line of fire, not speaking over others but speaking up with others, like the time he and Chrissie paid their own way to Rome to support survivors when George Pell gave evidence by video to the Royal Commission, citing he was too ill to travel in person to Australia.

Disarmingly and brutally honest about the nature of crimes against their own and other children, they made one likewise determined not to euphemise the facts or euthanise the truth.

This couple lived with the anguish of knowing that the serial sex offender Father Kevin O'Donnell repeatedly raped their daughters, Emma and Katie at Oakleigh's Sacred Heart Primary School.

Emma was later to suicide from an overdose when she was 26 years old, found dead on her bedroom floor clutching the teddy bear her parents had given her when she was a little baby.

Like her big sister, Katie had also spiralled out of control and, after drinking heavily, she walked into a car travelling at high speed and is now permanently impaired — both mentally and physically.

Every time the Fosters talked about these catastrophic horrors or, indeed, spoke up as advocates for survivors or gave evidence and support, these wounds must have been constantly reopened and sutures to the grieving heart unpicked.

He never gave up and nor should we. Just months after Emma killed herself, Anthony and Chrissie flew to Sydney in the hope of a meeting with then Pope Benedict, in town for the Catholic World Youth Day celebrations. The Pope's refusal remains a cogent symbol of the church's arrogance and lack of compassion.

Somehow, Anthony Foster bore all of this and channelled it into the greater good. He did tell me once, it helped sustain him, to keep him this side of madness and grief. 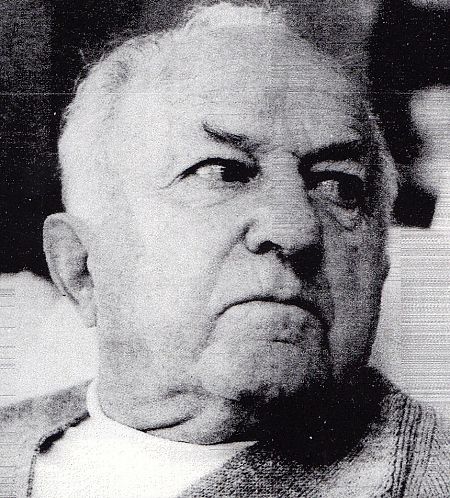 This is the now dead Father Kevin O'Donnell, serial rapist of both girls and boys, and but one of the many faces of Catholic Church paedophilia. For decades he was much lauded and indeed decorated with honours by the church. (Image via frandi.wordpress.com)

Foster feared neither Pell nor the Catholic Church nor its formidable power and tentacled political, judicial and social influence. Neither its might nor the Almighty phased him. He refused to capitulate to the ugly threats, intimidation and insults that he and Chrissie endure to this day.

Many in the wider community will be unaware of the ugly, and continuing, "black ops" and propaganda unleashed by the Catholic Church against the Fosters — whispering campaigns designed to soil their reputations with ugly rumours and filthy innuendo, attempting to destroy this couple and what remained of their family and morale.

But the remnant of what was left is greater than the sum of Australia's Catholic Church and the Vatican entire — including the progressive Francis who remains strangely inert and compliant to the power now amassed by its adept acquisitor now boasting if not a Da Vinci codex, then a Vatican postcode, Cardinal George Pell.

To Chrissie, it is difficult to imagine the depth of raw grief you must be experiencing and it seems impertinent to say that so many of us share this ache and sense of loss. I cannot think of you without thinking of Anthony and nor can I think of him without thinking of you.

Father of abuse victims Anthony Foster dies  https://t.co/VRqQyBgKu8 via @theage And then this happens.And they still say there is a God.

You both are the Miracle of Love. How wonderful that you found each other and that you were together when he died.

It is ironic that just before Anthony died, Victoria's Chief Commissioner of Police, Graham Ashton told media that a decision involving allegations of sexual assault made against Cardinal George Pell was “imminent” and “not too far off”. In October, three Victoria Police officers went to Rome to question Pell about these allegations.

Anthony Foster may be dead but his heart is still beating in so many who loved him as a human being, and for his integrity, personal ethics and the ideals for which he stood.

A big embrace for Chrissie and daughters Katie and Aimee, and all survivors and families, friends, lawyers, doctors, support groups, journalists and cuppa makers.

I salute Anthony Foster and acknowledge a life well lived. And well-loved.

It has been a privilege to share part of The Great Journey with him.

DISCLAIMER: Tess Lawrence makes no imputation whatever against Cardinal Pell.

DISCLOSURE: Tess Lawrence has worked for the Christian Brothers in relation to sexual abuse matters.

Dignified statement from the Victorian Premier on Anthony Foster. https://t.co/rT7DQuEz6c via @danielandrewsmp