Lawyers for Catholic Church sex abuse victims are applying to the Royal Commission for leave for their clients to appear with Cardinal Pell in Rome. Contributing editor-at-large Tess Lawrence reports.

IN A SENSATIONAL DEVELOPMENT, lawyers representing Catholic Church sex abuse victims are applying to the Royal Commission into Institutional Responses to Child Sexual Abuse, seeking leave to appear with Cardinal Pell in Rome.

Others lawyers are also expected to seek leave.

If leave is granted, it would go some way to mitigate what is publicly perceived to be a judicial and psychological imbalance of power, and unfair concession granted to the domineering Cardinal Pell.

On ill-health grounds Pell controversially sought and was granted the right to give testimony from Rome by video link, and thus has avoided returning to Australia and confronting victims in person in the Royal Commission's Ballarat sittings.

The region was the scene of industrial strength sex abuse and, for some who suicided, the killing fields of notorious serial and convicted paedophiles, including George Pell's former flatmate, the now incarcerated Father Gerald Ridsdale, who coincidentally appeared by video link in the last Ballarat sittings.

At last count, the crowd-funding effort to send abuse survivors to Rome, set up by comedian and media personality Meshel Laurie on Go Fund Me in three days had already raised more than $177,000 from an empathetic and compassionate community, wiping any smiles from the faces of Pell's more influential and rabid supporters.

Singing on the same page is Tim Minchin, whose irreverent song Come Home (Cardinal Pell) has already had more than 431,000 hits. Money raised from sales will also go towards the Go Fund Me campaign.

The public groundswell has caused panic in Pell's lavish basilican bunker and today's statement by Pell that he wants to meet with the survivors in Rome is yet aother sly and strategic media device in damage control; a feeble and desperate attempt to again control the public debate.

Despite all the spin, legal carpet bombing and strafing aimed at sex abuse victims/survivors, their families, advocates and support groups, this band of brothers and sisters, united by the blasphemous scourge of paedophilia, refused to be cowed or intimidated.

The Pell machine's "black ops" division has again been trying to promulgate the outrageous slur that, if allowed in the same room as the Cardinal, the survivors might cause harm or disruption.

In all the inquiries and this Royal Commission, nothing but respect and good behaviour has been displayed within legal portals by victims/survivors, as far as I know.

If leave is granted for their lawyers to appear in Rome, it will be a victory for justice and common sense.

It also means, of course, that Pell's lawyers could also seek leave to appear in Rome.

Moreover, the Royal Commission could also send an assisting counsel to Rome.

The Rome sitting should be on independent turf. Australia's Ambassadorial residence would be ideal. Or perhaps studios used by the ABC.

Either way, a proper crew should be available.

‘Pell has always helped victims, listened to them and considered himself their ally’ With allies like him… https://t.co/FxRoNrJPmS

In effect, the Ballarat/Rome sittings starting on the 29th of this month will, through the blessed miracle of modern technologies, be such that all parties will be online simultaneously and technically in the same room.

This is so easy to do. It's done every day in other spheres and in boardrooms all over the world, as well as TV studios.

Legal history will be made. The world will be invited into that one room. It will be good for all parties – as it should be – and it will be a triumph for fairness and judicial compromise.

Justice will not only be done, it will be seen to be done.

DISCLOSURE: Tess Lawrence has worked for the Christian Brothers in matters specific to child sexual abuse, and continues to do pro bono work for victims/survivors, families, friends, supporters, carers, and legal and other advocates. 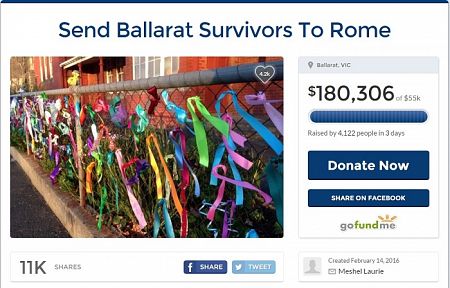