All we are saying … is give bigotry a chance!

Some out there, particularly on the loony left – all those do-gooder liberals who shake their head with every passing day, who wring their hands in disgust at where the nation is headed – have finally had a reality check.

Yes, as Attorney-General George Brandis says, even bigots have rights.

For too long, the real people have been unable to freely express themselves. It is difficult to be a happy and balanced citizen when you cannot say what you really think about others. All of that communist/fascist politically correct legislation preventing you from commenting on someone's race, or complexion, or their religion...

I mean, come on, we cannot crack one joke in print or in the media about those groups which we laugh at due to their cultural inferiority and political stupidity?

What sort of a crazy world are we living in?

Poor Andrew Bolt. The pain and humiliation he must have felt in recent times. Thankfully, our elected Government wishes to amend the Racial Discrimination Act just for Andrew. Soon he will be able to get back to his high quality journalism.

We can be thankful too, because Andrew might have turned out differently. He is what I call a true multicultural success story.

Coming from one of those non-English speaking backgrounds – at least that is what I've heard – I must say one could be naturally suspicious about what sort of baggage he brought over to my country. On the other hand, he has a complexion that is pretty close to almost being Anglo-Saxon, which is helpful.

Not that this really matters, but you know what I mean...

When I watch him talk on TV and read his opinion columns you cannot help but feel a tinge of pride in the way he carries himself. Yes, even though Andrew comes from, I think, a Dutch background, as far as I am concerned — he is still okay.

You know what I mean.

It's like that Alan Jones – even though we hear he might be one of those ahmm … bachelors – he sticks to what is important; good quality broadcasting that is balanced and fair.

Now, I know, given Andrew's type of cultural background, his parents or grandparents probably came over to our country as economic migrants to suck the life out of our economy, take our jobs, bring their sub-standard culture, smelly foods and sponge off our welfare system. Given the mess they left in Europe, you'd think they'd want to stay with their own kind, particularly after we won the bloody war for them and it was safe to stay.

But the fact is, he has adopted Australian ways and customs, never talks about his heritage, and looks and sounds almost looks like one of us, tells me that he is a true multicultural success story.

Is he not the best kind of Western-orientated gentleman? No comment…

Other so called 'minorities' might learn a thing or two from Andrew.

Okay, so he can never really be one of us per se. But then again Andrew hates Labor and pretty much everyone apart from a few people in the Liberal Party.

Now you have to respect that. That is called being fair and balanced.

He has also made it easier to talk sensibly about all of those bloody Aborigines and refugees who keep whinging and complaining. Now that takes real courage.

Good on you Andrew.

And good on you Abbott Government for making it easier for people like me to say exactly what's on our minds.

Yours in Ironic Free Expression. 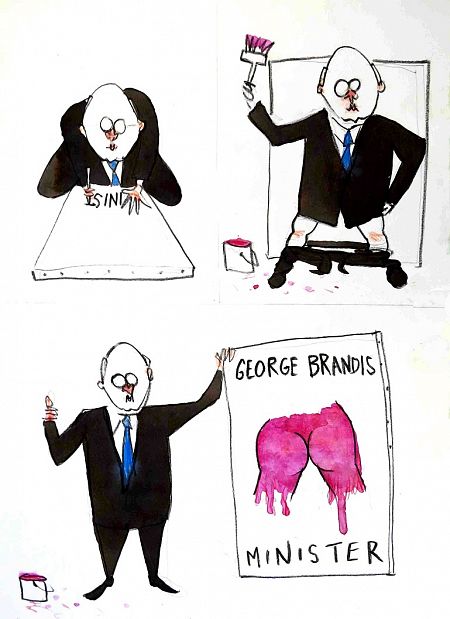