The AFP's Ashbygate investigation was doomed from the start; a time-consuming sideshow to placate Twitter while the bodies were buried, writes Sydney bureau chief Ross Jones.

There is no doubt Brough asked Ashby to obtain extracts from Slipper’s diary with the intent to pass them on to (then) News Corp hack Steve Lewis.

As far back as 2013, the Ashbygate Trust received (expensive) legal advice that:

The evidence is sufficient to find an inference that Mal Brough procured or encouraged Mr Ashby to forward him a copy of the diary. That is revealed in electronic communications to and from Mr Brough. However, if it cannot be shown that Mr Ashby was not authorised to access the information, there would appear no offence committed by Mr Brough or Mr Lewis. The accessorial liability, on the information presently available, does not have any prospect of succeeding, especially given the restrictions on the offence in the definition of what constitutes ‘access’.

Any capable lawyer – and the AFP have a few – would have told its investigators the same thing.

Yet the AFP chose this, of all angles, to investigate, rather than any of the tasty issues such as insurance fraud, causing harm to a Commonwealth official, defrauding the Commonwealth, etc.

'In September 2014 the AFP received a request to investigate matters relating to the alleged unauthorised disclosure of information from the official diary of former Speaker of the House of Representatives, Peter Slipper.' 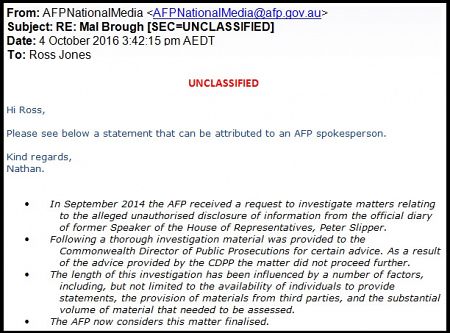 This might well have been the case and, if so, the request might have come from Labor MP Graham Perrett, who on 19 March 2013 had asked the Federal Police to do just that.

'The conspiracy and accompanying behaviour towards Mr Slipper could constitute causing him harm in his capacity as a Commonwealth public official, contrary to s147.1 of the Criminal Code Act 1995 and all the aforementioned involved parties other than Mr Ashby may still be liable as either principals or accessories pursuant to Part 2.4 of the Criminal Code (Extension of criminal responsibility).'

Perrett had written to the AFP previously, on 21 December 2012:

…. I ask the Australian Federal Police to prepare a brief of evidence for referral to the Director of Public Prosecutions (DPP), if appropriate.

So there is no way the AFP can say they were not asked to pursue other aspects of this sordid matter, but they refused, point blank.

'The AFP is aware that an appeal has been lodged with the Federal Court to be heard on 30 May 2013.  As the facts surrounding the appeal are consistent with your referral, the AFP has suspended the evaluation of the matter until the outcome of the appeal has been finalised.'

Raiser was wrong, there was no appeal – leave to appeal had not yet been granted – but as a reason it would do.

Time. Everyone needed time. By the time the AFP raided Ashby’s Mum’s all the real stuff, the files with the names, had been disposed of. Sent to data heaven.

The raid, complete with media leaks and contrived footage of James in various poses, was doomed from the start.

#AshbyGate This AFP "raid" on James Ashby was all just for show #qldpol #auspol https://t.co/bpVmlO75wn

Approval must have been given either by a mug lawyer who had the no idea the CDPP would simply scoff before retiring to their rooms, or by parties who wanted a nice, time-consuming side show to placate Twitter while the bodies were buried.

And buried they were.

The only casualty was Brough.

Mal should have easily withstood Dreyfus’s taunts, after all he held his seat on a 15% margin and, as his lawyer probably told him, AFP charges were seriously unlikely despite the media colour.

So why did he go?

Can you imagine the machinations required to get Mal Brough to resign?

He’d spent every waking hour since the 2007 Ruddslide planning, calculating and executing his triumphant return. His prize, the grand prize of Fisher with its sinecure and power, was his. He would grip it with his cold, dead hands.

It must have been terrible.

And that brings us to point 2.

It is now over 12 months since Ashbygate: the plot to destroy Australia’s Speaker was published and:

'The Uniform Defamation Law requires that a plaintiff must commence proceedings for defamation within a year of publication or broadcast. However, courts may extend this to up to three years if the plaintiff can demonstrate there were good reasons why they could not start the action within a year.'

As no person has raised any issues regarding accuracy or defamation, it is reasonably safe to say that all concerned parties, many of whom are well lawyered up, consider everything in the book to be accurate.

None of the players will ever escape the truth of their actions.

They have, however, escaped justice. So far.

AFP drop investigation into the copying of Peter Slipper’s diary. No charges for Mal Brough or James Ashby. https://t.co/xNU4CSZkvd pic.twitter.com/dihZk7tKpD

OK, I'm calling it
We need a Royal Commission into the AFPhttps://t.co/gIhknWQwxY #auspol #ashbygate